A recent letter exchange between the leaders revealed plans to take their "friendship" to new heights. 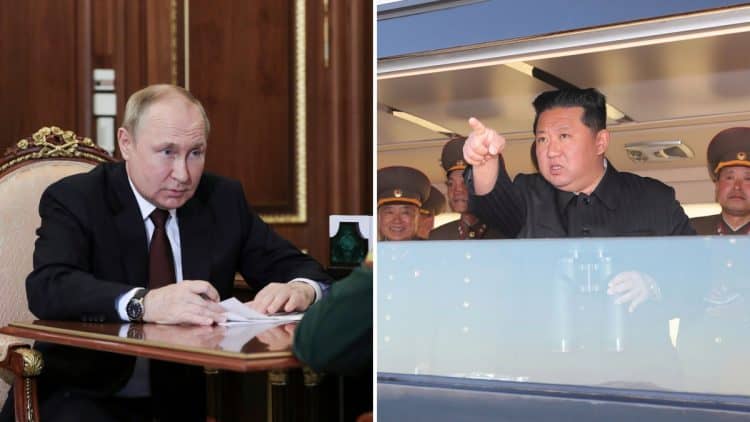 President Vladimir Putin is determined to make Russia’s “comradely friendship” with North Korea even stronger, a recent letter has revealed.

The Russian leader wrote to Kim Jong-un on North Korea’s liberation day (August 15), vowing to “expand [its] comprehensive and constructive bilateral relations with the country”.

The letter said that closer ties between the countries would “conform with the interests of the two countries,” North Korea’s state media, KCNA reports.

Responding to Putin, North Korea’s leader said that a friendship between the countries had been “forged in the anti-Japanese war” in the Second World War, and that the “strategic and tactical cooperation, support and solidarity” between Russia and North Korea had reached new heights.

He said this was a result of the countries’ common efforts to frustrate military threat and provocation from “hostile forces”. While Mr Kim did not specifically identify the hostile forces by name, North Korea has used the term to refer to the US and allies on many occasion.

It was only in July that Mr Kim said North Korea was ready to mobilise its nuclear war deterrent in the face of potential military conflicts with the US or South Korea. In the same month, North Korea became one of the few countries to recognise two Russian-backed separatist states in eastern Ukraine, after Russia declared them independent.

Reacting to the news, Ukraine, which has been fighting against the Russian invasion for nearly six months, cut off diplomatic ties with Pyongyang.

Related: Piers Morgan gets banned from Russia and everyone says the same thing