Robert Mugabe, former prime minister and president of Zimbabwe whose rule was mired in human rights abuses and corruption, has died aged 95. 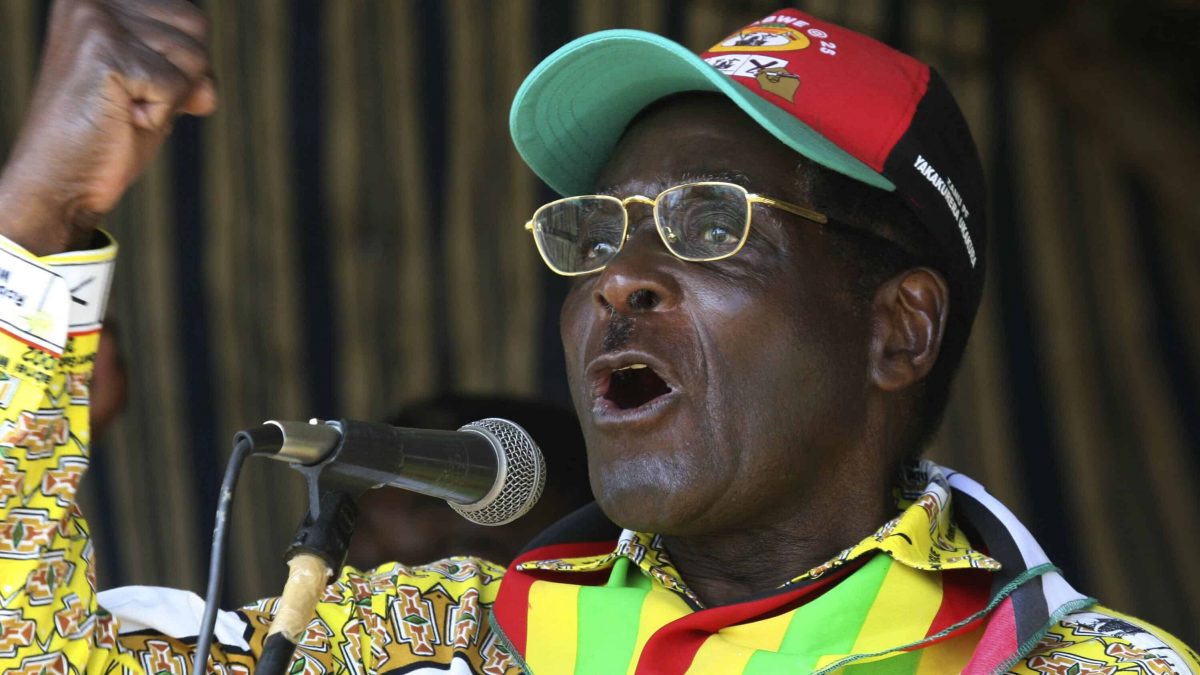 Robert Mugabe, who ruled Zimbabwe for nearly four decades with a savage regime marked by bloodshed and corruption has died aged 95.

Hailed by many as a pan-Africanist, the former prime minister and president dominated the country by human rights abuses, murder and torture.

His near 40-year leadership of the former British colony was marked with bloodshed, persecution of political opponents and vote-rigging on a large scale.

Current president Emmerson Mnangagwa confirmed the death, calling Mr Mugabe a “pan-Africanist who dedicated his life to the emancipation and empowerment of his people”.

He said: “Cde Mugabe was an icon of liberation, a pan-Africanist who dedicated his life to the emancipation and empowerment of his people. His contribution to the history of our nation and continent will never be forgotten. May his soul rest in eternal peace.”

He became prime minister in 1980 of the new Republic of Zimbabwe and assumed the role of president seven years later.

In 2000 he led a campaign to evict white farmers from their land, which was given to black Zimbabweans, and led to famine.

Mugabe retained a strong grip on power, through controversial elections, until he was forced to resign in November 2017, at age 93.

A letter from Mr Mugabe read out in Zimbabwe’s parliament said: “My decision to resign is voluntary on my part and arises from my concern for the welfare of the people of Zimbabwe and my desire for a smooth, non-violent transfer of power.”

Cars began honking horns and people cheered in the streets of Harare as the news spread.

Mr Mugabe, who had been the world’s oldest head of state at 93, was replaced by Mr Mnangagwa, who had recently been fired as Mr Mugabe’s vice-president.

Speaking at the time, then-foreign secretary Boris Johnson said the end of Mr Mugabe’s reign appeared to be a “moment of hope” for the people of Zimbabwe, and should not be allowed to mark “the transition from one despotic rule to another”.

Mr Johnson – speaking about Mr Mnangagwa when he was tipped to take over the office – said: “I think it’s very important at the moment that we don’t focus too much on the personalities, let’s concentrate on the potential, the hope for Zimbabwe – an incredible country, a beautiful country blessed with extraordinary physical and human potential.

“What we need to see now is free, fair, democratic elections and above all not a transition from one despotic rule to another.”

Robert Mugabe- one of the most ruthless tyrants of modern times.

His savage rule over Zimbabwe for nearly four decades was dominated by murder, bloodshed, torture, persecution of political opponents, intimidation and vote-rigging on a grand scale.

He was the man who, in 1980, became the head of Government of Zimbabwe, chosen to guide the country towards “democracy” after 14 years of rebellion against the Crown headed by the white Southern Rhodesian leader, Ian Smith.

Much of Mugabe’s dirty work was carried out by his bullying henchmen, the “veterans” of the guerrilla war mounted against the Smith regime.

They attacked and often murdered white farmers, burning their homes, looting their possessions and confiscating their land.

And under Mugabe’s leadership the economy of this mineral-rich country descended into chaos with thousands of people reduced to grinding poverty, many of them suffering from near-starvation and worse.

Mugabe’s relationship with the Commonwealth, which he dubbed an “Anglo-Saxon unholy alliance”, was always stormy.

Zimbabwe suspended from the Commonwealth

Zimbabwe was suspended from the Commonwealth in March 2002, after Mugabe had been denounced for vote-rigging his own re-election.

He said: “Anything you agree on Zimbabwe which is short of this position (ending suspension) no matter how sweetly worded, means Zimbabwe is still a subject of the Commonwealth. This is unacceptable. This is it. It’s quits. And quits it will be.”

His political opponents were often beaten to within an inch of their lives, sexually abused and sometimes charged with treason and homosexual offences.

One woman said she escaped being raped by Mugabe’s henchmen only by crying out that she was suffering from Aids.

Robert Gabriel Mugabe was born on February 24 1924 in Kutama. He was educated at Kutama Mission School and Fort Hare University and obtained degrees in correspondence courses with other educational establishments, including London University.

He worked as a teacher at various schools in Zimbabwe (or Southern Rhodesia as it was then) and in neighbouring countries.

Mugabe became publicity secretary of the National Democratic Party in 1960 and the following year was appointed acting Secretary-General of the Zimbabwe African People’s Union, which was eventually banned.

When, through Lord (Christopher) Soames, Margaret Thatcher brokered a deal in 1979 to end the Ian Smith rebellion, to everyone’s surprise, the Marxist Mugabe with what was described as “a mix of conciliatory and intimidatory rhetoric” became prime minister from 1980 to 1987. From 1988 he was president of Zimbabwe.

The new Government, anxious to attract foreign investment, declared that white farmers were a welcome and integral part of the new Zimbabwe.

This attitude was at first successful, and Smith and many of his associates held seats in the Parliament, while Joshua Nkomo, as Mugabe’s rival as leader of the nationalist forces, was included in the first cabinet.

But old rivalries soon emerged. Nkomo was excluded and reports of atrocities emerged in Matabeleland.

Then the land seizures took place. Plans to redistribute land peacefully were not working and ultimately the wartime “veterans” were sent in to dispossess, often violently, the white farmers of their land.

This meant that inexperienced blacks took over and in many cases the fertile land went to wrack and ruin, leading to acute food shortages and a dramatic downturn in Zimbabwe’s economy.

The result: idle land and withering crops. The people who knew how to farm had been banned and had to sit idly by while Mugabe decided which ones of his cronies to give the best land to.

“Zimbabwe for the blacks”

Mugabe’s immovable attitude was “Zimbabwe for the blacks”, often leaving white Zimbabweans dead, or in mortal fear and with no citizenship rights to settle anywhere else in the world. One farmer protested: “I am a white Zimbabwean and am being persecuted because I am white. That is racism.”

Any voice of dissidence was met with violence and, in the case of an independent newspaper, shut down.

Political enemies were accused of homosexuality, and thrown into jail. Peter Tatchell, the homosexual rights campaigner, was assaulted by Mugabe’s bodyguards when he tried to effect a citizen’s arrest on the Zimbabwean leader.

The sanctions imposed on the country at one stage barred Mugabe and his family and supporters from visiting Britain. This ended regular spending sprees by his wife in West End shops – usually at the expense of the Zimbabwean taxpayer, whose money Mugabe shamelessly amassed for his own benefit.

But despite an EU travel ban, he was allowed to attend the funeral of Pope John Paul II in Rome in 2005. While there he shook hands with the Prince of Wales, who was seated one place away from the president. Clarence House said Charles was “caught by surprise” when Mugabe leaned over to greet him.

In May 1998, Mugabe faced student demonstrations against Government corruption. But these protests were ruthlessly faced down, as were others across later years of his presidency, when anti-government protests became a common occurrence.

In August 2016 one dubbed the “mega demonstration”, saw the country’s split opposition join together for a single action to confront Mugabe’s government. Those involved were met with water cannons, police batons and tear gas.

Under Mugabe many humble Zimbabweans became billionaires, but ones which were on the brink of starvation and unable to pay for fuel because their money was worth so little because of stratospheric inflation.

In 2008 and 2009, the state’s central bank printed so much of its currency – the Zimbabwe dollar – that the country experienced mind-boggling hyperinflation that peaked at 500 billion per cent, according to the International Monetary Fund.

The result was that items such as a loaf of bread would often cost millions of Zimbabwean dollars.

Inflation was only brought under control when the government abandoned the Zimbabwe currency and used the US dollar as its main medium of trade. In 2016 this was replaced with a new currency called bond notes.

As his dictatorial reign over the African country continued, many voiced their concerns about the power-obsessed leader. This included the then Archbishop of York, John Sentamu, who cut up his dog collar on live television in a dramatic protest.

He pledged that he would not wear the symbol of his office again until the Zimbabwe president had been removed from power, and insisted the gesture represented the way Mugabe had “destroyed the identities” of his people through oppression and economic mismanagement.

In 2008 Mugabe was also stripped of his honorary knighthood, awarded in 1994, over his “abuse of human rights” and “abject disregard” for democracy, the Foreign Office said at the time. The Queen approved the annulment.

But he was admired by some. In late 2015 the president was awarded China’s alternative to the Nobel Peace Prize, the Confucius Peace Prize, for what its committee called his inspired national leadership and service to pan-Africanism.

And in October 2017, Mugabe was appointed a “goodwill ambassador” for the World Health Organisation, but this was later withdrawn after a flood of outrage and concerns voiced by international leaders and health experts poured in.

Just one month later, his 37-year rule was brought to a dramatic end.

Following a military takeover, political revolt, his house arrest, and the threat of impeachment, Mugabe, the then oldest head of state in the world, finally resigned as president.

In a letter read out in parliament, the then 93-year-old said his decision was “voluntary on my part and arises from my concern for the welfare of the people of Zimbabwe and my desire for a smooth, non-violent transfer of power”.

The announcement prompted jubilant scenes in the capital Harare as the news spread and Zimbabweans took to the streets to celebrate the downfall of the ageing dictator.

In 1961, he married Sarah Francesca Hayfron. She died in 1992. Then in 1996, he married Grace Manufu, a union which produced two sons and one daughter. His first marriage produced one son who predeceased him.