"It's only March, but you, sir, have just posted the dumbest thing I'll see on Twitter all year," one person replied. 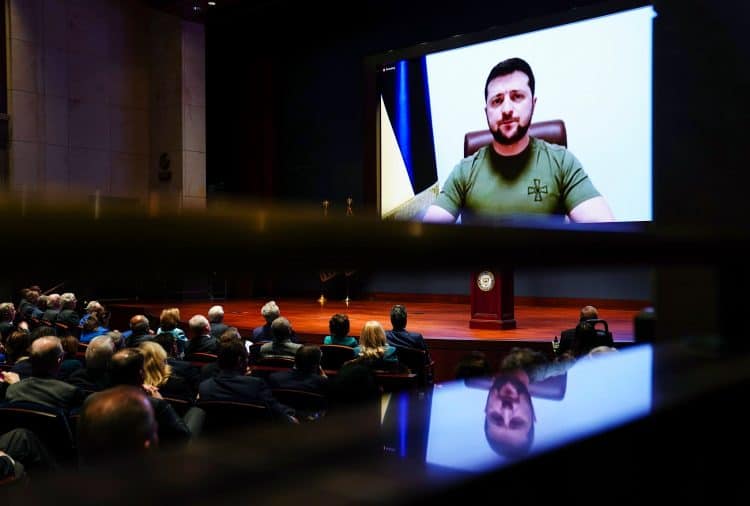 A former Republican candidate has been criticised for calling out the outfit worn by Volodymyr Zelensky during his speech to Congress.

Peter Schiff, who stood for the GOP in Connecticut and is the chief economist at Wall Street behemoth Euro Pacific Capital, pointed the finger at the Ukrainian president after his joint address to Congress on Wednesday morning.

Zelensky was speaking from war-ravaged Kyiv, dressed in a green t-shirt – a staple of his wardrobe since Russia launched its invasion of Ukraine last month.

“I understand times are hard, but doesn’t the President of the #Ukraine own a suit?” Schiff asked.

“I don’t have much respect for current members of the U.S. Congress either, but I still wouldn’t address them wearing a t-shirt. I wouldn’t want to disrespect the institution or the Unites States.”

The tweet was swiftly decried by outraged commentators, who accused Schiff of overlooking the speech to seize on irrelevant details.

“The guy is in the middle of a war zone ducking mortars, Peter, he’s not going to be rolling around his garment rack with him,” one user wrote.

“Dude, not only is he in a war-zone, where I’m sure it’s hard to get a suit press and dry clean, but even if it was possible, it’s favorable for people to see him as one of them sharing the struggle,” another added.

But Schiff doubled down in a second tweet, claiming: “He would not have had to press a suit. I’m sure he had a clean suit hanging in the same closet as his t-shirts. Plus even if there were not suits available, maybe a long-sleeved shirt with a collar.”

It comes after Zelensky’s emotional speech compared the Russian bombardment of Ukraine with Pearl Harbor and 9/11. “Our country experiences the same every day right now – at this moment, every night, for three weeks now. Russia has turned the Ukrainian sky into a source of death for thousands of people.”

Concluding his speech in English, he said: “Today the Ukrainian people are defending not only Ukraine. We are fighting for the values of Europe and the world, sacrificing our lives in the name of the future.