Two officers from the town of Windsor are accused of drawing their guns, pointing them at US Army second lieutenant Caron Nazario and using a slang term to suggest he was facing execution. 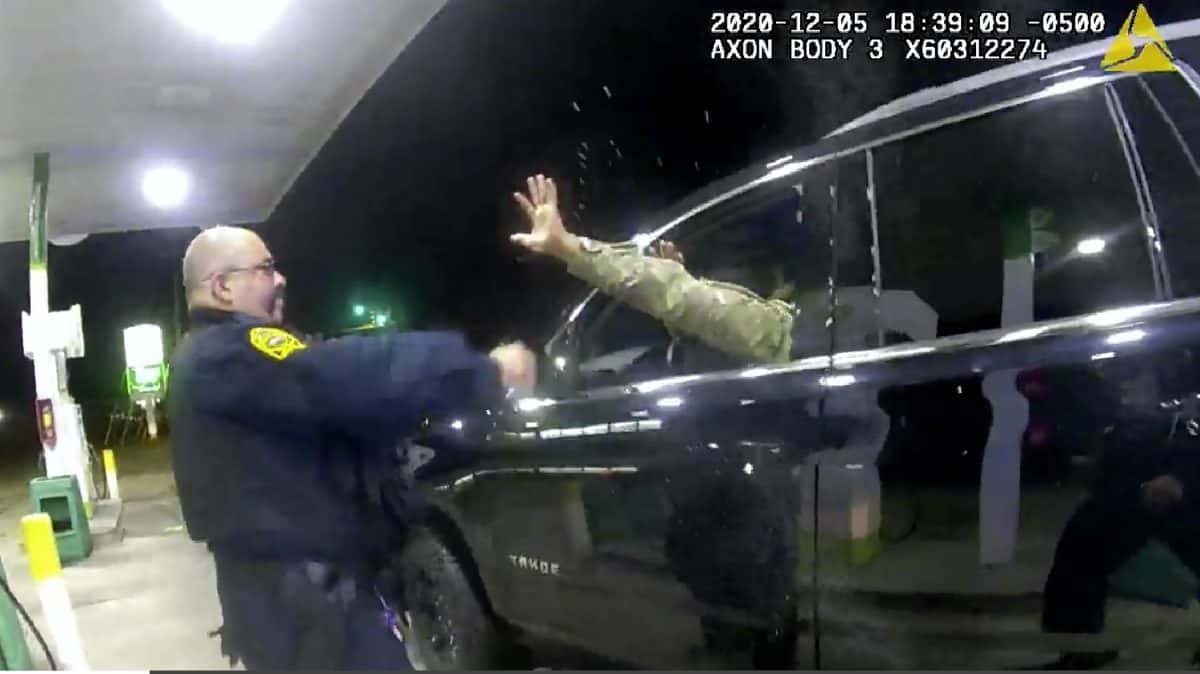 In this image made from Windsor, (Va.) Police video, A police officer uses a spray agent on Caron Nazario on Dec. 20, 2020, in Windsor, Va. Nazario, a second lieutenant in the U.S. Army, is suing two Virginia police officers over a traffic stop during which he says the officers drew their guns and pointed them at him as he was dressed in uniform. Caron Nazario says his constitutional rights were violated by the traffic stop in the town of Windsor in December. (Windsor Police via AP)

One of two police officers accused of pepper-spraying and pointing their guns at a black US army officer during a traffic stop has since been fired, authorities in Virginia have said.

Two officers from the town of Windsor are accused of drawing their guns, pointing them at US Army second lieutenant Caron Nazario and using a slang term to suggest he was facing execution.

Town authorities said in a statement they were joining calls from election officials, including Governor Ralph Northam, to request an investigation by Virginia State Police into the December 2020 encounter.

Mr Nazario was also pepper-sprayed and knocked to the ground by the officers, Joe Gutierrez and Daniel Crocker, according to the lawsuit he filed earlier this month against them.

The two sides in the case dispute what happened, but Mr Crocker wrote in a report that he believed Mr Nazario was “eluding police” and he considered it a “high-risk traffic stop”.

Watch: Caron Nazario, a Black Army lieutenant, was driving through Windsor, Va., on Dec. 5, 2020, when two officers drew guns and doused him with pepper spray, according to a lawsuit filed this month. https://t.co/lKlE3KX6Np pic.twitter.com/HhJyQg4AuL

Attorney Jonathan Arthur told The Associated Press that Mr Nazario was not trying to elude the officer, but was trying to stop in a well-lit area.

In the statement on Sunday, Windsor officials said an internal investigation opened at the time into the use of force determined that department policy was not followed.

Officials said disciplinary action was taken and Mr Gutierrez has since been fired.

Mr Northam called the December incident in the town 70 miles south-east of Richmond “disturbing” in a tweet on Sunday, adding that he had directed state police to review what happened.

“Our Commonwealth has done important work on police reform, but we must keep working to ensure Virginians are safe during interactions with police, the enforcement of laws is fair and equitable, and people are held accountable,” the governor said in his statement.