In 2019 17,000 Mexican citizens were killed with US made guns compared with 14,000 American citizens - despite it having just 40 per cent of the population and just one gun store. 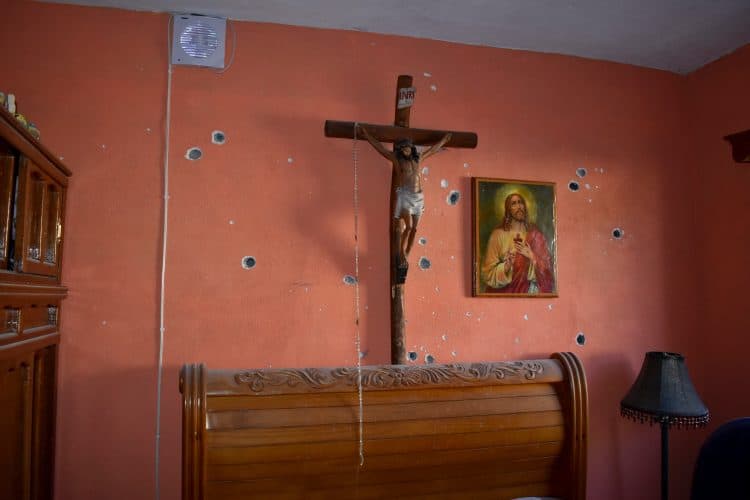 The Mexican government has sued some of the biggest manufacturers of guns in the US, saying they are fuelling bloodshed through reckless business practices.

The lawsuit alleges that the companies knew they were contributing to illegal arms trafficking, which has been linked to many deaths.

Officials say Mexico is seeking as much as $10 billion (£7.2 billion) in compensation, though any amount would be decided by the court.

The companies have not yet commented.

Companies including Smith & Wesson and Barrett Firearms have been targetted in the lawsuit, which was filed on Wednesday in the US state of Massachusetts.

It says the Mexican government took the action “to put an end to the massive damage that the [companies] cause by actively facilitating the unlawful trafficking of their guns to drug cartels and other criminals in Mexico”.

The gun manufacturers “are conscious of the fact that their products are trafficked and used in illicit activities against the civilian population and authorities of Mexico”, the Foreign Ministry said in a document related to the lawsuit.

Mexico said the companies had used “marketing strategies to promote weapons that are ever more lethal, without mechanisms of security or traceability”.

Mexican officials said that some of the guns made by Colt appeared to target the Mexican market in particular, such as a pistol engraved with the face and name of Mexican revolutionary leader Emiliano Zapata.

Mexico has strict rules regulating the sale of weapons and they can only be purchased legally at one shop located on an army base in the capital.

As a result, those who want to buy weapons often get them from the US.

According to a Mexican government statement, criminal organisations buy thousands of pistols, rifles, assault weapons and ammunition in supermarkets, on the internet and at arms fairs in the US which are then used to commit crimes in Mexico.

The US Bureau of Alcohol, Tobacco, Firearms and Explosives found that 70 per cent of firearms recovered in Mexico between 2014 and 2018 which were submitted for tracing had come from the US.

In 2019 alone, more than 17,000 murders in Mexico were linked to trafficked weapons.