The French president's position against his far-right rival has strengthened in the past week, new polling shows. 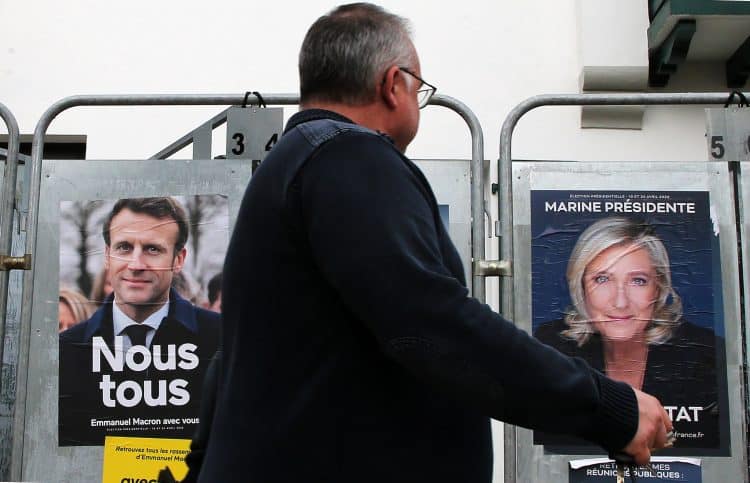 Emmanuel Macron appears on course to win the second round of the French presidential election – with 54 per cent of the vote, new polling has revealed.

According to a YouGov and Datapraxis poll, seen by the New Statesman, Marine Le Pen – the incumbent president’s far-right rival – is set to win 46 per cent of the vote.

The gap between the candidates has increased by six points since the last time the pair were polled as a hypothetical match-up, indicating a shift towards Macron since it was confirmed that he would face Le Pen in the second round.

“Macron seems to be in a slightly stronger position going into Easter,” Paul Hilder, the founder of Datapraxis, told the New Statesman.

“Having watered down his unpopular retirement reforms and signalled to left-wing voters that he needs them, he has improved his numbers among key groups such as rural and lower-educated voters. But his situation remains fragile: it should not be this close.”

Left-wing voters are expected to be crucial to the outcome of the election. A third of those who voted for left-winger Jean-Luc Mélenchon in the first round will spoil their ballot or abstain, the poll finds – with a third going for Macron and the remaining third for Le Pen.

“The biggest uncertainties for the second round remain turnout, and what Mélenchon’s voters and undecideds do,” Hilder added.

“The widespread expectation that Macron will win anyway could depress turnout among left-wing voters and the left behind, who mostly dislike the president and are looking more towards parliamentary elections later this year.”

Earlier this week, far-right candidate Le Pen warned against sending any more weapons to Ukraine, and called for a rapprochement between Nato and Russia once Moscow’s war in Ukraine winds down.

Le Pen, an outspoken nationalist who has long ties to Russia, also confirmed that if she unseats Macron in the run-off, she will pull France out of Nato’s military command and dial back French support for the European Union.

Asked about military aid to Ukraine, Le Pen said she would continue defence and intelligence support.

“(But) I’m more reserved about direct arms deliveries. Why? Because… the line is thin between aid and becoming a co-belligerent,” the far-right leader said, citing concerns about an “escalation of this conflict that could bring a whole number of countries into a military commitment”.