Before entering politics, he removed a photo of Baruch Goldstein – a Jewish militant who gunned down 29 Palestinians in a mosque in 1994 – from his living room. 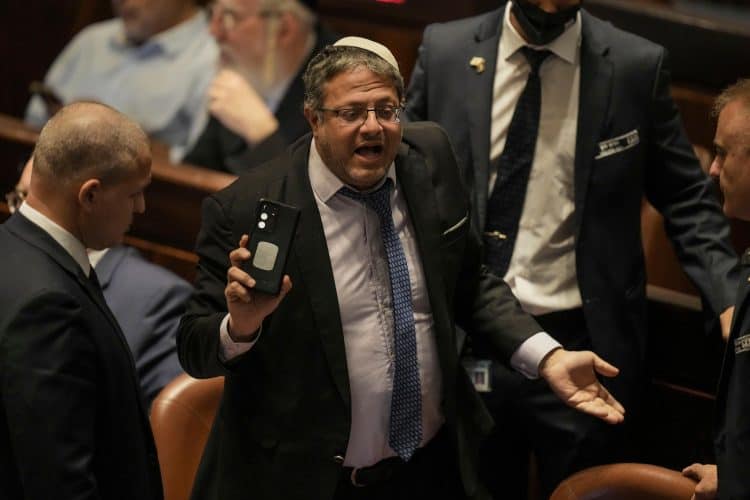 An extremist legislator who was once relegated to the margins of Israeli politics is surging in the polls ahead of the country’s November elections.

Itamar Ben-Gvir is poised to emerge as a major force in the upcoming vote and could help propel former prime minister Benjamin Netanyahu back to power.

His rise from extremist rabble-rouser to influential politician highlights the Israeli electorate’s shift to the right, legitimising ultra-nationalist views that were once shunned by the mainstream and all but extinguishing hopes for Palestinian statehood.

Mr Ben-Gvir calls his Arab colleagues “terrorists”, wants to deport his political opponents, and in his youth, his views were so extreme that the army banned him from compulsory military service.

The extremist’s stunning rise is the culmination of years of efforts by the media-savvy legislator to gain legitimacy.

Mr Ben-Gvir recently told reporters: “Over the last year I’ve been on a mission to save Israel.

“Millions of citizens are waiting for a real right-wing government. The time has come to give them one.”

The 46-year-old has been a fixture of Israel’s extreme right for more than two decades, gaining notoriety in his youth as a disciple of the late radical rabbi, Meir Kahane.

He first became a national figure when he famously broke a hood ornament off then-prime minister Yitzhak Rabin’s car in 1995.

“We got to his car, and we’ll get to him too,” he said, just weeks before Mr Rabin was assassinated by a Jewish extremist opposed to his peace efforts with the Palestinians.

Mr Kahane’s violent anti-Arab ideology – which included calls to ban Jewish-Arab intermarriage and for the mass expulsion of Palestinians – was considered so repugnant that Israel banned him from parliament and the US listed his party as a terrorist group.

Mr Kahane himself was assassinated by an Arab assailant in New York in 1990.

In recent years, his followers and some of his ideas have made their way to the Israeli mainstream – in large part thanks to Mr Ben-Gvir.

He transitioned into politics last year after a career as a lawyer defending radical Jewish West Bank settlers. His intimate knowledge of the law has helped him test the boundaries of the country’s incitement laws and avoid sanctions that have prevented some of his closest associates from running in elections.

Mr Ben-Gvir, for instance, calls Kahane “righteous and holy” but also says he does not agree with everything his former mentor said. He is careful to limit his own calls for expulsion to those who engage in violence and legislators – Jewish or Arab – who he says undermine the state.

Before entering politics, he removed a photo of Baruch Goldstein – a Jewish militant who gunned down 29 Palestinians in a mosque in 1994 – from his living room.

He no longer allows his supporters to chant: “Death to Arabs” at political rallies. Instead, they are told to say: “Death to terrorists!”

Mr Ben-Gvir makes frequent appearances on Israeli TV and radio, displaying a cheerful demeanour, quit wit and knack for deflecting criticism as he banters with his hosts.

He also has tapped into a wave of anti-Arab and nationalist sentiment driven by years of violence, failed peace efforts and demographic changes. Mr Ben-Gvir’s supporters are largely religious and ultra-Orthodox Jews, who tend to have large families, and also come from the influential West Bank settler movement.

Mr Ben-Gvir himself lives in a hard-line settlement next to the West Bank city of Hebron, home to more than 200,000 Palestinians.

Shuki Friedman, an expert on Israel’s far right at the Jewish People Policy Institute, said of Mr Ben-Gvir: “He is a populist demagogue. He plays on the sentiments of hate and fear of Arabs.

“He interviews well, he is good on camera and he has had plenty of screen time that has given him legitimacy.”

His surge in the polls has made him a central figure in Mr Netanyahu’s comeback strategy.

The former Israeli prime minister is on trial for corruption, and the public is again torn over his fitness to rule. After four consecutive inconclusive elections, Mr Netanyahu and his Likud party hope to break the logjam with Mr Ben-Gvir’s support.

“Yes, Ben-Gvir is someone very militant and yes, sometimes a little provocative, but he is someone who cares about Israel,” said Likud legislator and Netanyahu confidant Miki Zohar, who insisted Mr Ben-Gvir would fall in line under a Netanyahu-led government.

Last week, Mr Netanyahu personally brokered a deal between Mr Ben-Gvir and a rival far-right leader, Bezalel Smotrich, to ensure they run together.

If they had not done so, Mr Smotrich might not have made it into parliament, depriving Netanyahu of a critical source of support.

“Joining forces is the order of the day,” Mr Netanyahu said.

One recent poll forecast Mr Ben-Gvir’s alliance taking 12 seats, which would make it parliament’s fourth-largest party. That means Mr Netanyahu almost certainly would make Mr Ben-Gvir a cabinet minister if he can form a government.

Thabet Abu Rass, the Arab co-director of the Abraham Initiatives, which promotes Jewish-Arab coexistence, said the mainstreaming of figures like Mr Ben-Gvir is not only a threat to Israel’s Arab citizens, but to the country as a whole.

“It’s very dangerous for the whole Israeli society,” he said. “It’s going to bring about the collapse of democracy.”