Foreign ministers issued a statement as clashes between Greek riot police and people attempting to cross the border erupted again. 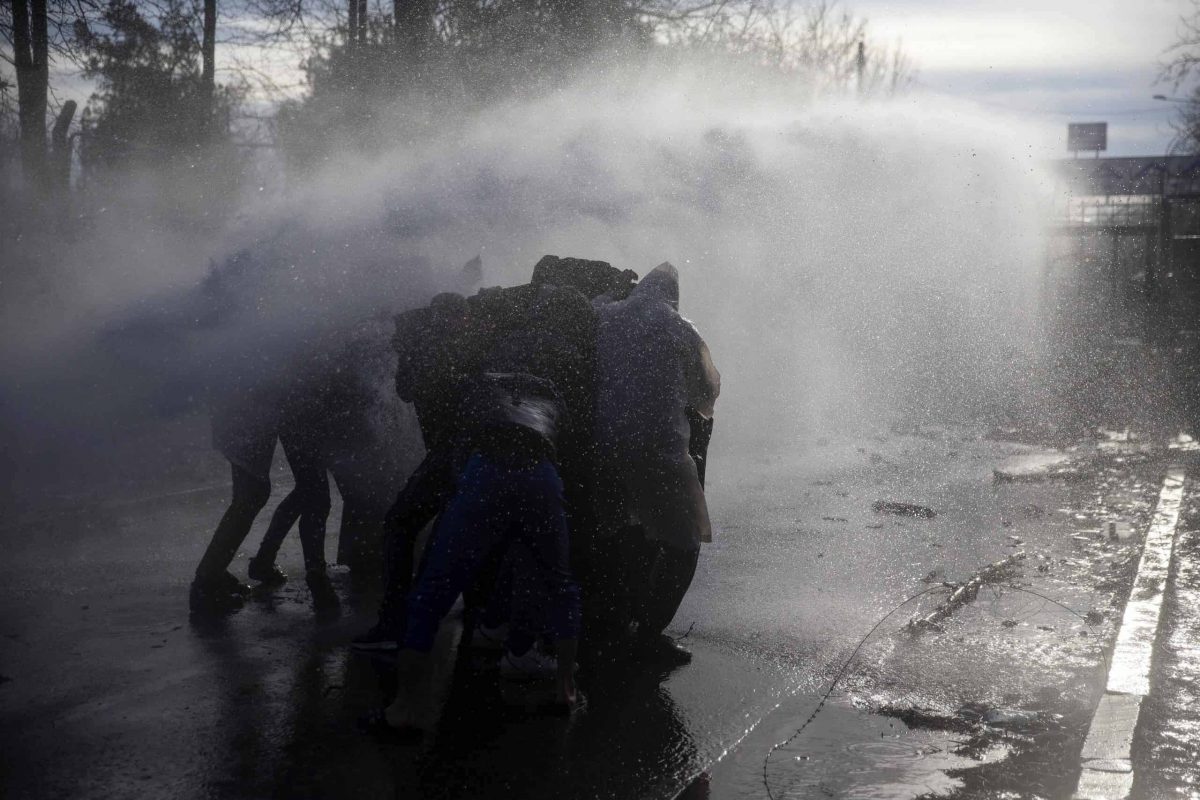 A Greek police water cannon operates from Kastanies border gate as migrants try to enter Greece from the Pazarkule border gate, Turkey at the Turkish-Greek border on Friday, March 6, 2020. Clashes erupted anew on the Greek-Turkish border Friday as migrants attempted to push through into Greece, while the European Union's foreign ministers held an emergency meeting to discuss the situation on the border and in Syria, where Turkish troops are fighting. (AP Photo)

Greek riot police used tear gas and a water cannon in the morning to drive back migrants trying to cross its land border with Turkey.

Turkish police fired volleys of tear gas back toward Greece in an ongoing stand-off between Ankara and the EU over who should care for migrants and refugees.

Similar clashes erupted later on Friday, and fires were burning on the Turkish side of the border which Greek officials said were lit by migrants.

Thousands of refugees and other migrants have been trying to get into Greece in the past week after Turkey declared that its previously guarded borders with Europe were open.

His move alarmed EU countries, which are still enduring political fallout from a wave of mass migration five years ago.

Greek authorities said they have thwarted more than 38,000 attempted border crossings in the past week, and arrested 268 people — mostly Afghans and only 4% Syrians.

Mr Erdogan has demanded that Europe shoulder more of the burden of caring for refugees. But the EU insists it is abiding by a 2016 deal in which it gave Turkey billions in refugee aid in return for keeping refugees on its soil.

Mr Erdogan spoke to German Chancellor Angela Merkel on the phone on Friday, telling her the Turkey-EU migration deal is no longer working and needs to be revised, according to his office.

EU foreign ministers met in Zagreb, Croatia on Friday to discuss the Greece-Turkey border situation and events in Syria, where Turkish troops are fighting. Mr Erdogan has cited a potential new wave of refugees from Syria as part of his reasons for opening the border.

The ministers acknowledged Turkey’s role in hosting millions of migrants and refugees, but said the EU “strongly rejects Turkey’s use of migratory pressure for political purposes. This situation at the EU external border is not acceptable”.

In a joint statement after the emergency meeting, the ministers expressed “full solidarity with Greece, which faces an unprecedented situation”. They said the EU was determined to protect its external borders.

The EU’s border agency Frontex said on Friday it will deploy 100 more guards to the Greek land border. It already has 509 officers in the country. It will also provide two more boats, three aircraft, one helicopter and three more thermal imaging vans to help police Greece’s land and sea borders.

“Encouraging refugees and migrants to attempt illegal crossing into European Union is not the way for Turkey to push for further support from the European Union,” he said.

The push to the Greek border, which began last week, has appeared organised by someone, with buses, minibuses and cars ferrying people from Istanbul.

Mohammad Omid, an Afghan who has been at the border for five days with his wife, said Turkish police told him to go to there.

“We don’t know what is happening,” he said in the border town of Edirne. “We are like a ball to them. Everyone passes us to this side and the other side. I don’t know what will happen to us.”

Greece has described the situation as a threat to its national security.

In response it has suspended asylum applications for a month and said it will deport new arrivals without registering them. Many migrants have reported crossing into Greece, being beaten by Greek authorities and summarily forced back into Turkey.

Hashim, a 21-year-old Pakistani migrant who did not give a surname, said he managed to enter Greece and was sent back to Turkey by Greek soldiers.

“Turk army say ‘Go to the border.’ When we cross Greek border, Greece army take our money, mobile (phones) and say: ‘Go back, go back,’” he told The Associated Press. “If we don’t go back, they will beat us, they will throw our mobiles and money (in) the river. And they remove our clothes. We come here in underwear. It is not human.”

Turkey said on Thursday it was deploying 1,000 special operations police to prevent Greek authorities from sending back those who managed to cross.

Mr Erdogan’s move comes amid a Syrian government offensive in the country’s north-western Idlib province, where Turkish troops are fighting. The Russia-backed offensive has killed dozens of Turkish troops and pushed nearly one million Syrian civilians toward Turkey’s sealed border.

Mr Erdogan and Russian President Vladimir Putin have brokered a ceasefire for Idlib.

Speaking on his return from Moscow, Mr Erdogan signalled there would be no change in Turkey’s policy.

“We don’t have time to discuss with Greece whether the gates which we opened are now closed. That business is over,” Turkey’s state-run Anadolu Agency quoted him as saying. “Our gates are open. The refugees will go as far as they can. We are not forcing them to leave.”