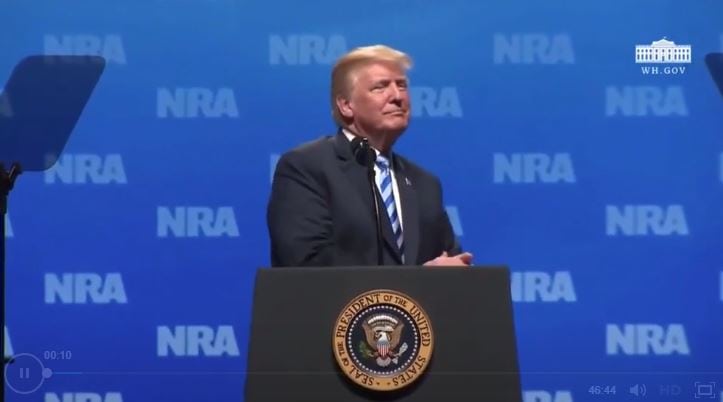 President Trump mocks Paris terrorist outrage and tells NRA crowd that London hospital is like a “war zone” for stabbing wounds because of guns regulations at National Rifle Association convention.

The NRA were the biggest financial backer of his presidential campaign, spending $6 million in TV ads on behalf of the Republican presidential candidate, more than the Trump campaign spent on itself.

In his bizarre speech yesterday, Trump insisted “this is your record crowd, you know, all-time record crowd. You do know that, so, just remember.” Only it wasn’t the biggest crowd at an NRA rally.

Donald Trump told the cheering crowd: “your Second Amendment rights are under siege, but they will never, ever be under siege as long as I’m your president” – which doesn’t actually make sense. It also echoes the lies that he regularly told during his presidential campaign when he boasted to rallies that Hillary Clinton would abolish the Second Amendment of the US constitution and confiscate people’s guns if elected.

The Second Amendment has never been under threat from Democrat politicians, the laws Republicans continue to block involve stopping loopholes allowing people to buy weapons from arms fairs and the Internet without background checks and age checks, as well as automatic weaponry more suited to warzones.

The President roused the NRA audience with an emphatic claim that if everyone in France had more guns rather than facing more terror attacks, terror attacks would have been stopped.

In his inimitably sensitive style President Trump pretended to be a terrorist in the Paris outrage that claimed 130 lives:

“I recently read a story that in London, which has unbelievably tough gun laws, a once very prestigious hospital right in the middle is like a war zone for horrible stabbing wounds,” Donald Trump told the cheering National Rifle Association delegates.

“Yes, that’s right, they don’t have guns they have knives. And instead there’s blood all over the floors of this hospital. They say it’s as bad as a military war zone hospital.”

“They don’t have guns. They have knives and instead there’s blood all over the floors of this hospital,” insisted Trump. “They say it’s as bad as a military war zone hospital … knives, knives, knives. London hasn’t been used to that. They’re getting used to that. It’s pretty tough.”

This is the latest in a series of pops at the capital by Trump who has not been invited to the Royal Wedding of Prince Harry and Meghan Markle, but is due in London for a state visit this summer on Friday 13 July.

Last year when the US President attacked the London Mayor during a terror attack, Sadiq Khan said he had more important things to do than respond to Trump’s “ill-informed tweet.”

Then when Trump retweeted anti-Muslim tweets from race hate group Britain First, the Mayor insisted that Trump should not be invited for a state visit. The President has also been disparaging about the new US embassy in London.

The President also took aim at a regular target Chicago, insisting: “we all know what’s going on in Chicago but Chicago has the toughest gun laws: they’re so tough, but you know what’s happening.”

And he equated methods of transport with automatic weapons too, rousing the NRA audience by jeering:

“we are going to have to outlaw, immediately, all vans and all trucks, which are now the new form of death for the maniac terrorists. Right?”

Just to be clear, Trump added: “so let’s ban, immediately, all trucks, all vans, maybe all cars. How about cars? Let’s ban them. Let’s not sell any more cars.”

“Kanye West must have some power because you probably saw, I doubled my African-American poll numbers. We went from 11 to 22 in one week. Thank you, Kanye, thank you,” insisted the President, “and they voted for me, and we won.” – Only 89% of black Americans voted Democrat in the Presidential election, but don’t let the truth get in the way of a budding bromance with the attention-seeking rapper who made headlines this week describing slavery as a “choice.”

Here is Trump’s full speech to the National Rifle Association: