In footage released overnight, Adam Toledo can be seen running away from police down an alleyway - as the officer shouts for him to stop and show his hands. 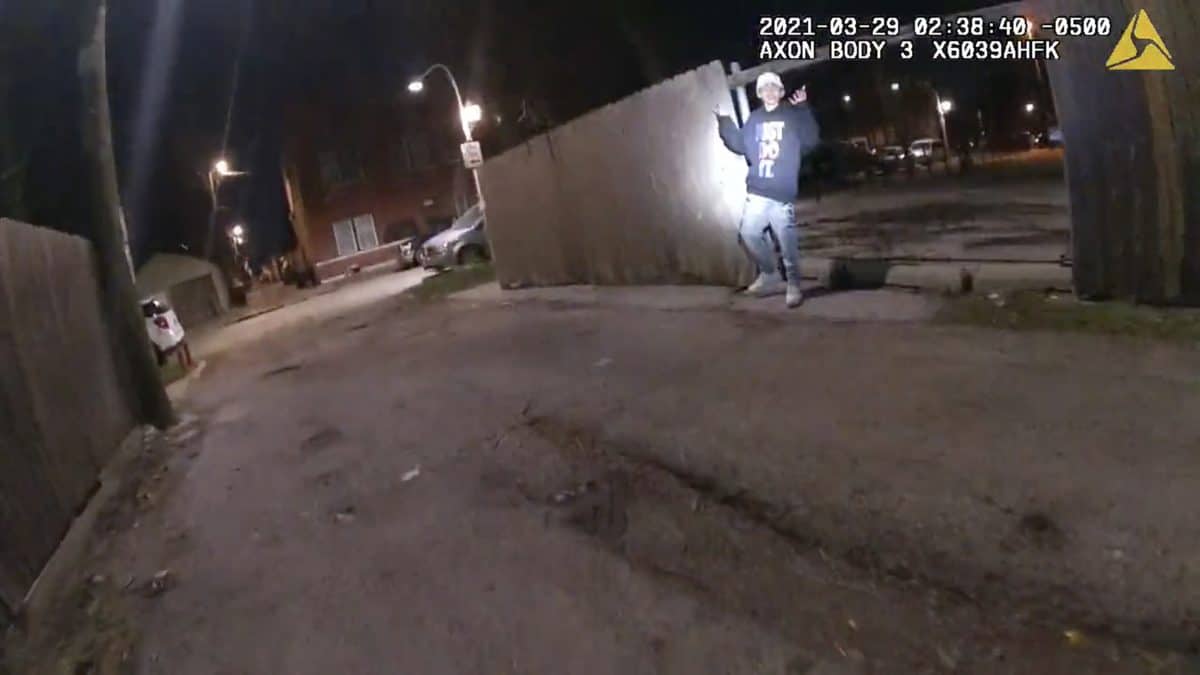 Bodycam footage of a police officer fatally shooting a 13-year-old boy in Chicago last month shows the teenager holding his hands up before he is shot.

In footage released overnight, Adam Toledo can be seen running away from police down an alleyway – as the officer shouts for him to stop and show his hands.

While approaching the wounded Adam, the officer radios in for an ambulance.

He can be heard imploring the boy to “stay awake,” and as other officers arrive, the officer who apparently fired the shot says he cannot feel a heartbeat and begins administering CPR.

Other officers can be heard saying, “Stay with me, buddy,” “Stay awake, bud. Come on bud, stay awake”, and “Come on, big guy.”

It was not immediately clear from the body camera footage whether Adam was holding anything when he turned around.

The Civilian Office of Police Accountability, an independent board that investigates Chicago police shootings, released the footage of the 29 March shooting after allowing the boy’s family to view it.

The board initially said it could not release the video because it involved the shooting of a minor, but it changed course after the mayor and police superintendent called for the video’s release.

The release comes in the wake of the traffic-stop shooting of Daunte Wright by an officer in a Minneapolis suburb that has sparked protests as the broader Minneapolis area nervously awaits the outcome of the trial for Derek Chauvin, the first of four officers charged in George Floyd’s death.

In Chicago, police said officers responded to an area of the Little Village neighbourhood on the city’s West Side after learning that gun shots had been detected in the area by a police-operated technology.

The teenager and a 21-year-old man fled on foot when confronted by police, and an officer shot the teen once in the chest following a foot chase during what the department described as an armed confrontation.

Police said a handgun the boy had been carrying was recovered at the scene.

The review board declined to release all but the most basic details of what happened, leaving many questions unanswered, including whether or not the boy pointed the gun at the officer or fired on him before the officer shot him.

The name of the officer, who was placed on administrative leave per department policy in police-involved shootings, has also not been released.

Some details did emerge at a hearing for a 21-year-old man who authorities say was with Adam the night he died, including prosecutors’ contention that the man fired the gun several times before officers arrived and had handed it to the teenager.

Neither Mayor Lori Lightfoot nor Superintendent David Brown has discussed the shooting in detail or suggested the officer did anything wrong.

But the video’s release comes at a time of inflamed tensions between police and the public.

Besides the ongoing trial of Chauvin, the country has in recent days watched video of the fatal shooting of Wright, and a police officer in Virginia pepper-spraying a black and Latino US Army second lieutenant during another traffic stop.

The Chicago Police Department has a long history of brutality and racism that has fomented mistrust among the city’s many black and Hispanic residents.

Adding to that mistrust is the city’s history of suppressing damning police videos.

The city fought for months to keep the public from seeing the 2014 video of a white officer shoot a black teenager, Laquan McDonald, 16 times, killing him. The officer was eventually convicted of murder.

And the city tried to stop a TV news station from broadcasting video of a botched 2019 police raid in which an innocent, naked, black woman was not allowed to put on clothes until after she was handcuffed.