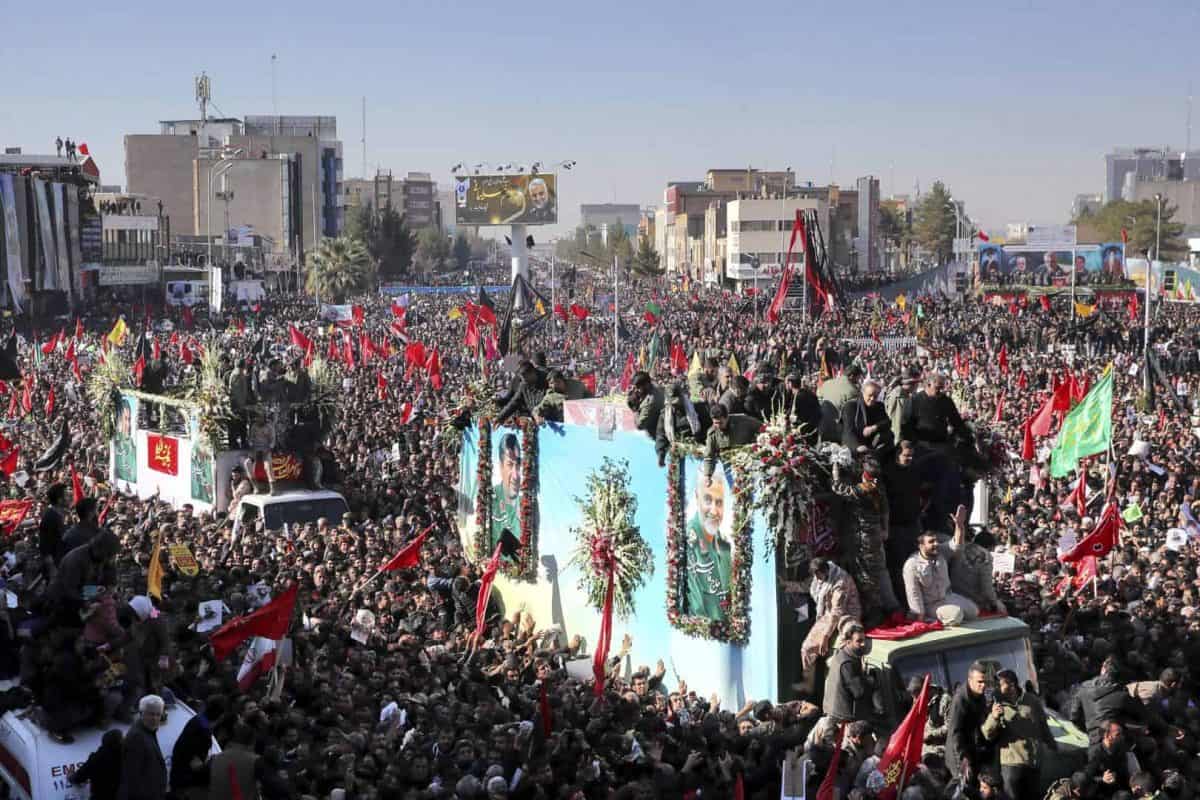 Thirty-five people have been killed and 48 others injured in a stampede at a funeral procession for a general targeted in a US air strike, according to Iranian state television.

The incident happened in Kerman, the home town of Revolutionary Guard General Qassem Soleimani, where the procession was under way, it said.

It quoted the head of Iran’s emergency medical services, Pirhossein Koulivand, as saying there had been people injured and killed.

A procession in Tehran on Monday drew more than one million people on Monday in the Iranian capital, crowding both main thoroughfares and side streets.

The leader of Iran’s Revolutionary Guard has threatened to “set ablaze” places supported by the United States over the killing of a top Iranian general in a US air strike last week.

Hossein Salami made the pledge before a crowd of thousands gathered in a central square in Kerman, the home town of General Qassem Soleimani.

His vow mirrored the demands of top Iranian officials – from Supreme Leader Ayatollah Ali Khamenei to others – as well as supporters across the Islamic Republic, demanding retaliation against America for a killing that has drastically raised tensions across the Middle East.

Mourners in Kerman dressed in black carried posters bearing the image of Gen Soleimani, a man whose death prompted Iran’s supreme leader to weep over his coffin on Monday as a crowd said by police to be in the millions filled Tehran streets.

Although there was no independent estimate, aerial footage and Associated Press journalists suggested a turnout of at least one million, and the throngs were visible on satellite images of Tehran.

The outpouring of grief was an unprecedented honour for a man viewed by Iranians as a national hero for his work leading the Guard’s expeditionary Quds Force.

The US blames him for the killing of American troops in Iraq and accused him of plotting new attacks just before his death on Friday in a drone strike near Baghdad’s airport.

Gen Soleimani also led forces in Syria backing President Bashar Assad in a long war, and he also served as the point man for Iranian proxies in countries such as Iraq, Lebanon and Yemen.

His killing has already pushed Tehran to abandon the remaining limits of its 2015 nuclear deal with world powers as his successor and others vow to take revenge.

In Baghdad, the parliament has called for the expulsion of all American troops from Iraqi soil, something analysts fear could allow militants from so-called Islamic State to mount a comeback.

Gen Soleimani’s remains and those of the others killed in the air strike were brought to a central square in Kerman, a desert city surrounded by mountains that dates back to the days of the Silk Road, where he will be buried later.

Mr Salami praised Gen Soleimani’s exploits and said as a martyr, he represented an even greater threat to Iran’s enemies.

“We will take revenge. We will set ablaze where they like,” Mr Salami said, drawing cries of “Death to Israel!” from the crowd.

Israel is a longtime regional foe of Iran.

According to a report on Tuesday by the semi-official Tasnim news agency, Iran has worked up 13 sets of plans for revenge for Gen Soleimani’s killing.

The report quoted Ali Shamkhani, the secretary of Iran’s Supreme National Security Council, as saying that even the weakest among them would be a “historic nightmare” for the US.

“If the US troops do not leave our region voluntarily and upright, we will do something to carry their bodies horizontally out,” Mr Shamkhani said.

Iran’s parliament, meanwhile, passed an urgent bill declaring the US military’s command at the Pentagon in Washington and those acting on its behalf “terrorists”, subject to Iranian sanctions.

The measure appears to mirror a decision by President Donald Trump in April to declare the Revolutionary Guard a “terrorist organisation”.

The US Defence Department used the Guard’s designation as a terror organisation in the US to support the strike that killed Gen Soleimani.

The decision by Iran’s parliament, done by a special procedure to speed the bill to law, comes as officials across the country threaten to retaliate for Gen Soleimani’s killing.

Also on Tuesday, Iranian foreign minister Mohammad Javad Zarif said the US had declined to issue him a visa to travel to New York for upcoming meetings at the United Nations.

The US as the host of the UN headquarters is supposed to allow foreign officials to attend such meetings.

“They fear that someone comes to the US and reveals realities,” Mr Zarif said, adding: “The world is not limited to New York and you can talk to the American people from Tehran and we will do that.”