"This country owes a huge debt of gratitude to Pippa Crerar - one of a handful of political journalist who are both talented at their job AND interested in doing it," Alex Andreou said. 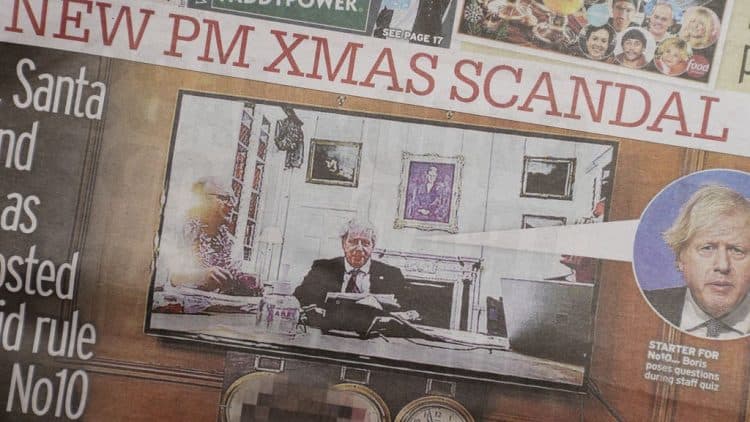 The image showed 24 people crowded together in a medium-sized room in the party’s Westminster HQ, with some of the group wearing paper hats and one sporting a House of Commons Christmas jumper.

It comes on the back of pictures of Boris Johnson playing quiz-master at a Tory Party quiz with two aides by his side wrapped in tinsel.

Crerar’s headline read: ‘Yes he was Taking Us For Fools (Again.)’, while the sub-head added:

Shaun Bailey has since quit as chair of the London Assembly’s police and crime committee, but according to reports, it could be the prime minister’s scalp she is really gunning for.

He said: “Until now, Johnson has batted off criticism and breaches of the rules that would have upended more conventional politicians by ignoring them, peremptorily declaring matters closed when they weren’t and the liberal use of his dressing-up box.

“Journalists have failed to land a knockout blow.

Reminding readers that the greatest threat to Johnson could still be to come, Snoddy added that it isn’t always the initial deed that sinks those at the helm of a ship.

Often, the “botched cover-up” is the final nail in the coffin.

Briton of the year

Several people elsewhere have been similarly complimentary of Crerar’s work.