"Only one in 100 of the offers by people to open their homes has been taken up because of the way the Government is running the scheme,” Lisa Nandy said. 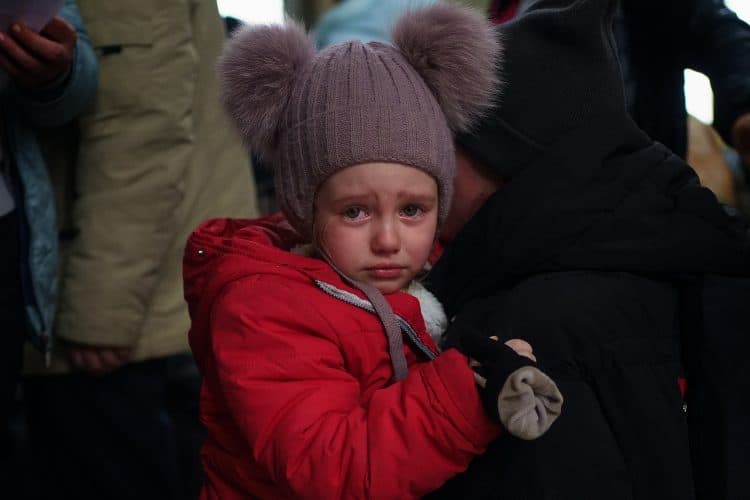 A young Ukrainian refugee cries on the shoulder of her mother in the entrance hall at Przemysl Glowny train station in Poland, after arriving by train from Ukraine to flee the Russian invasion. Picture date: Tuesday March 29, 2022.

Just 2,700 visas have been granted to people wanting to come to the UK under the Homes For Ukraine scheme, despite applications reaching 28,300, latest figures show.

Campaigners called the numbers “woeful”, urging the Government to “cut the red tape” for refugees seeking sanctuary in Britain.

The scheme started accepting applications on March 18, with the aim of allowing individuals, charities, community groups and businesses to bring Ukrainians – including those with no family ties to the UK – to safety.

However, Britain retains a visa requirement on security grounds while other European countries have waived checks in response to the humanitarian crisis caused by the Russian invasion.

The total number of applications from Ukrainians wanting to come to the UK was 59,500 as of March 29, the Home Office said.

This includes 28,300 under the Homes For Ukraine scheme and 31,200 under the separate Ukraine Family Scheme, which allows Ukrainians to join relatives living in the UK.

There have been 25,500 visas issued altogether, including 2,700 under the sponsorship scheme and 22,800 under the family scheme.

Refugees minister Lord Harrington said progress is starting to be seen thanks to changes the Home Office has made to “streamline” the visa process.

“The response of the British public has been incredible, opening their hearts and homes to the people of Ukraine, and we must do everything we can to make the most of this extraordinary generosity,” he said.

“We are starting to see progress because of changes the Home Office made to streamline the visa process and put additional resources into the system.

“However, we need to do more and will be making further improvements to bring people to the UK as quickly as possible.

“I look forward to welcoming more families and ensuring they have the support they need when they arrive.”

“British people (have) shown strong support but shambolic Home Office bureaucracy (is) letting everyone down,” she tweeted.

“A waste of the amazing generosity”

Shadow levelling up secretary Lisa Nandy accused the Government of “wasting the amazing generosity that British people have shown”.

“It’s scandalous that only one in 100 of the offers by people to open their homes has been taken up because of the way the Government is running the scheme,” she said.

“Ministers gave no thought to key details before the scheme was announced. They need to cut out unnecessary bureaucracy and speed up the processing of visas.

“And instead of a DIY scheme where sponsors and refugees have to find each other on social media, the Government needs to take charge of matching people. This is a serious humanitarian crisis, not online dating.

“People have stepped up in Ukraine’s hour of need. These figures show that the Government needs to urgently do the same.”

Sonya Sceats, chief executive of the Freedom From Torture charity, described the sponsorship scheme numbers as “woeful”, and called on the Government to “cut the red tape”.

“In a month where people across the country signed up to welcome more refugees than the Government has in 10 years, these woeful numbers prove why visa-based schemes are an unsuitable gateway for refugees fleeing Ukraine to reach safety here in the UK,” she said.

“Increasing reports of horrendous sexual violence against Ukrainian women and girls make it all the more urgent for the Government to cut the red tape so that survivors can get here quickly and access services from specialist trauma services like Freedom From Torture.”

Related: Gordon Brown: ‘Any caring and compassionate chancellor would have done more’