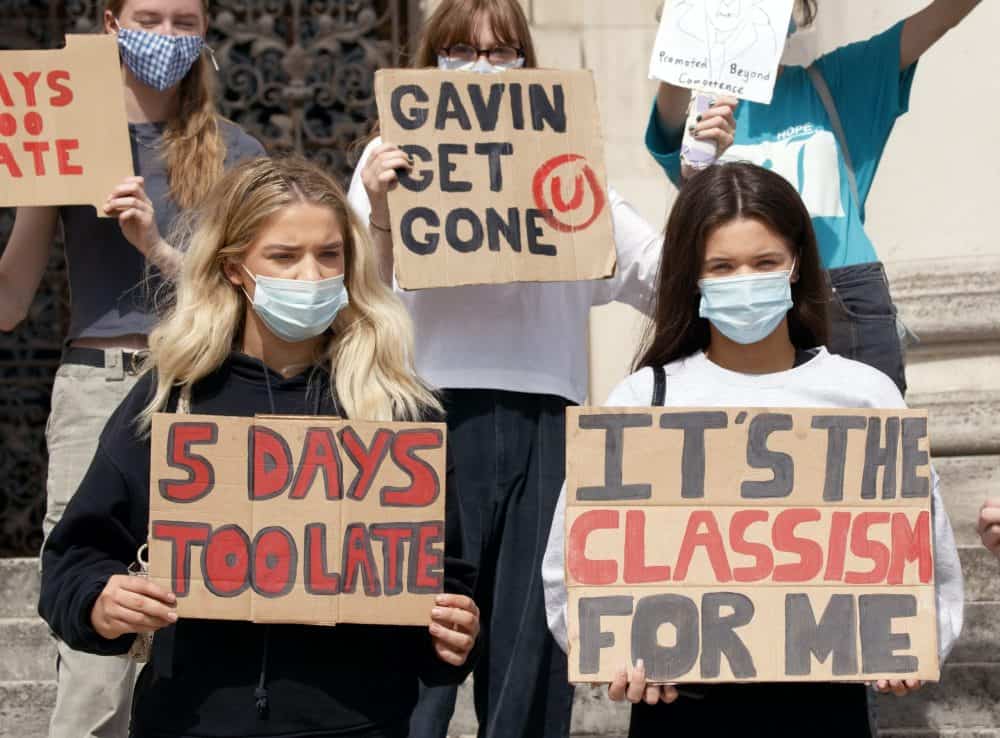 Gavin Williamson was warned the exams algorithm would disadvantage poorer pupils around a month before it was axed, it has emerged as the embattled Education Secretary came under fresh scrutiny.

Sir Jon Coles, a former Department for Education director-general, issued a clear warning to Mr Williamson that hundreds of thousands of students could receive the wrong grades, it became clear on Thursday as pupils learned their GCSE results.

However, Schools Minister Nick Gibb told BBC Breakfast News that the algorithm didn’t disadvantage pupils from less well off backgrounds, which has confused the situation even further, leaving students across the country demanding clear answers.

Regardless of the warning Mr Williamson pushed on with using the algorithm in England until he came under cross-party fire after nearly 40% of A-level students had their results downgraded.

The Cabinet minister was hanging on to his job despite anger from his own colleagues, as Scottish Tory leader Douglas Ross refused to give Mr Williamson his backing.

Mr Ross, who had called for Scottish Education Secretary John Swinney to lose his job after the exams U-turn there, suggested the English minister should have taken action quicker once the problems in Scotland became apparent.

“I think Gavin Williamson and the Government and the Department for Education will be reflecting on why did they not see the problem that the SNP had to deal with as a result of their actions in Scotland,” he told BBC Radio Scotland.

“I’m not here to say in your report that I think Gavin Williamson has done a great job and he should continue.

“I think he has to reflect on what happened to so many pupils in England, students who were concerned for four days, because we had the exact same up here in Scotland for a week.”

Sir Jon wrote to Mr Williamson warning the algorithm being used by regulator Ofqual to moderate grades was only 75% accurate and would lead to hundreds of thousands of students getting the wrong grades, according to The Times.

Schools minister Nick Gibb insisted officials did act over the warning as he defended the algorithm, which was only scrapped in favour of teachers’ assessments on Monday, with exams being abandoned during the coronavirus crisis.

“I called a meeting with Ofqual and senior officials at the department – this is in mid-July – and we went through the concerns that Jon had,” Mr Gibb told BBC Breakfast.

“He felt that the model as devised would disadvantage young people from poorer families and so we discussed that in great detail and I was reassured that it would not, and in fact that it turned out that it did not.

“For all the problems that we encountered, the downgrades of the grades did not disproportionately affect young people from disadvantaged backgrounds.”

Mr Gibb insisted “the model was a good model” but the way it was deployed was flawed.

“The application of the model is a regulatory approach and it’s the development of that that emerged on the Thursday when the algorithm was published,” he told BBC Radio 4’s Today programme.

“And at that stage it became clear that there were some results that were being published on Thursday and Friday that were just not right and they were not what the model had intended.”

Mr Williamson has apologised for the “distress” caused but repeatedly refused to say whether he had offered his resignation for overseeing the fiasco.

Mr Gibb said on Thursday that he had given “a lot of thought” about offering to quit but he told LBC radio he decided “it would have been the wrong thing to do”.