“It became really disruptive over the summer with large crowds gathering around when she was on the beach, inappropriate antisocial behaviours, with people throwing stones at her, trying to sit children on her to get photos or take selfies, and trying to feed her really random objects as well." 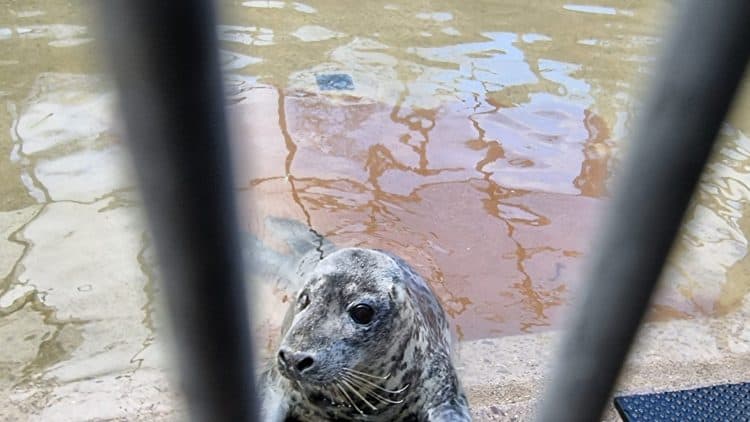 An overly-friendly wild seal has been taken into rehab after being fed doughnuts, sandwiches and fish by people in Plymouth.

Wildlife experts have said Spearmint the seal has come to rely on food from beachgoers and her rehabilitation will involve making her wary of humans again before she is released into the sea from a remote part of Scotland.

Dan Jarvis, director of welfare and conservation at the British Marine Life Rescue, said feeding young seals fish is particularly problematic because they are supposed to learn how to catch them in the wild.

Mr Jarvis told BBC Radio 4’s Today programme: “In Spearmint’s case here, the whole problem started when she started being fed by people in the wild, either from the pier or on boat trips last summer, unfortunately.

“Because she’s a quite a young seal, she was only a few months old at the time, this has potentially been life changing for her behaviour because it’s made her quite habituated to approaching people and interacting with them.

“It became really disruptive over the summer with large crowds gathering around when she was on the beach, inappropriate antisocial behaviours, with people throwing stones at her, trying to sit children on her to get photos or take selfies, and trying to feed her really random objects as well.

“We’ve heard of people trying to throw sandwiches and ice cream and doughnuts at her for example, which of course, aren’t normal things she would eat.

“But it’s when people were feeding her fish, that it did become a real problem.”

The RSPCA said the young seal was brought to their West Hatch centre in Taunton, Somerset, after she stopped eating food which was being thrown to her, and suffered with pus coming from her ear.

They said Spearmint was given antibiotics on Wednesday and is having injections every other day.

A spokesperson for the charity said: “She was checked by a specialist wildlife vet as she is not eating and also had pus coming from her right ear.

“Naturally wild animals can find being in captivity, even for a brief time, a struggle, but our experienced team, who specialise in wildlife rehabilitation, are doing everything they can to reduce the stress for Spearmint and try to get her re-released as soon as possible.”

Spearmint’s rehab, which will be carried out by the RSPCA, will involve minimising human contact, rebuilding her wariness of people, and socialising her with other seals.