A nurse who raised serious concerns about patient and staff safety is about to be sacked and is now staging a hunger strike outside the Department of Health. Jade Taylor, 46, has also been sleeping outside the government office, decided she had to speak out after her own parents were allegedly mistreated at Mid Staffordshire […] 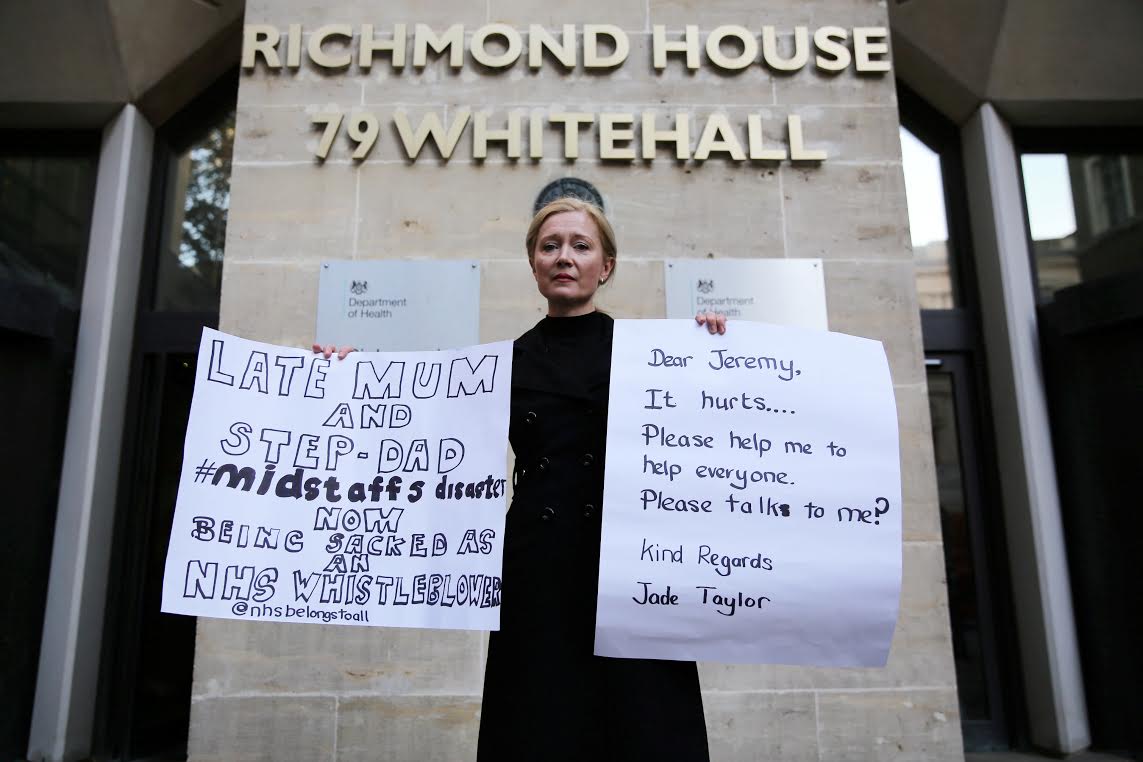 A nurse who raised serious concerns about patient and staff safety is about to be sacked and is now staging a hunger strike outside the Department of Health.

Jade Taylor, 46, has also been sleeping outside the government office, decided she had to speak out after her own parents were allegedly mistreated at Mid Staffordshire NHS foundation trust.

She was so angry about the poor treatment she bravely spoke out but feels she became a target by senior staff, and she took a year off work suffering with stress related issues. Today she is expecting to be sacked by Berkshire Healthcare NHS Foundation Trust.

To fight back against her treatment she began her hunger strike on Monday evening. Apart from a quick trip to some public lavatories she has remained in place, hoping to get a meeting with Jeremy Hunt, who has been under huge pressure for his treatment of junior doctors.

Speaking from the pavement outside the Department of Heath’s Whitehall HQ, she said: “I stayed here all night albeit opposite next to the Downing street Police for safety. She added: “The trust I work for are saying that I have lost trust and confidence in them.

“I am not accepting that.

“I want them to properly investigate my concerns. I refuse to resign and I’m not going anywhere.”

Berkshire Healthcare NHS Foundation Trust said: “We are unable to comment directly about Jade’s case as it is ongoing and we respect her right to confidentiality.

“However, we take concerns about patient safety and quality of care extremely seriously and have a strong culture of encouraging and supporting our staff to speak up.

“To date, all whistleblowing cases raised with us have been thoroughly investigated to the full satisfaction of our regulators, and where necessary we have implemented improvements to address any lessons learned.”