“I said I was going to picture it because I didn’t think it looked like a lot and I could see the child’s realisation that this is what I’ve been given to eat for a week, and just the sense of sadness." 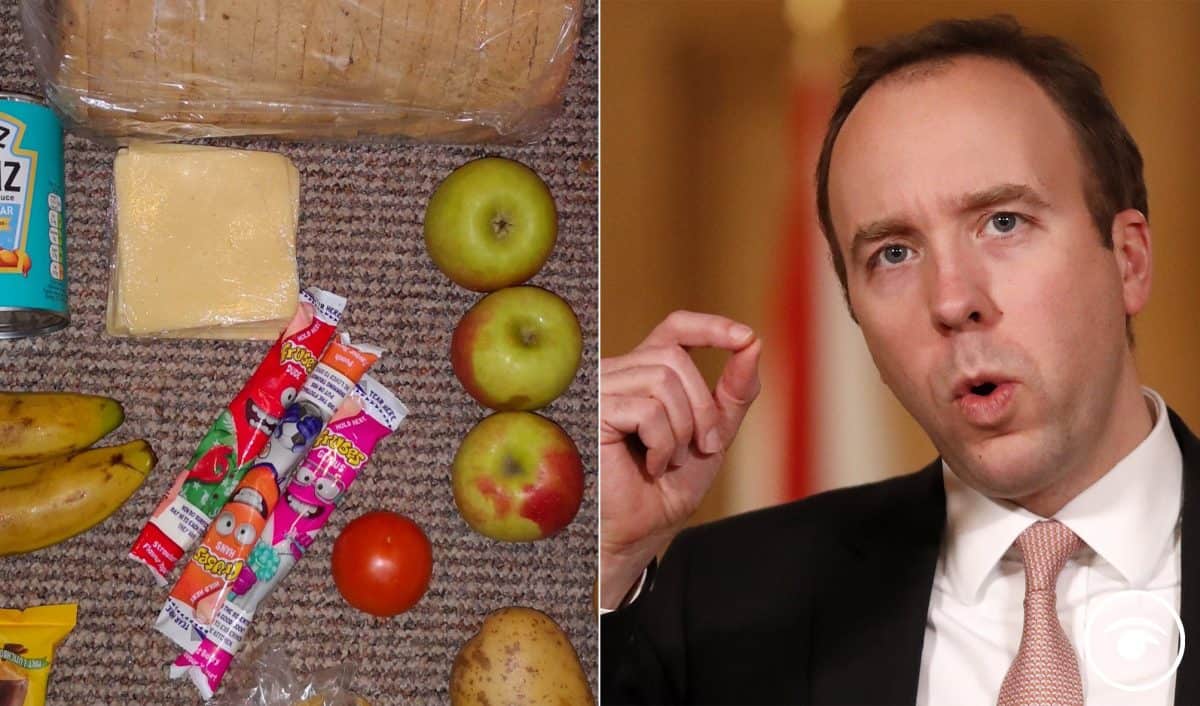 A mum who shared an image of a free school meal food parcel she had received has described how depressing it felt to look at the meagre contents of the package.

The picture posted on Twitter was among other photos showing poor-quality and low-value parcels sent to families during lockdown which have been described by the Health Secretary as “clearly inadequate”.

Manchester United footballer Marcus Rashford – who has been behind a drive to get free school meals to children who need them – called for the system to be fixed “quickly”.

Education food service provider Chartwells has apologised after the image was shared of a parcel estimated to contain just over £5 of food.

Sarah, who does not want to be identified to protect her two children, is disabled and relies on free school meals.

She told BBC Breakfast: “As I unpacked that food parcel in my living room and looked at the contents, it felt very sad and very depressing, and one of my children came in and saw me laying this out on the floor and asked why.

“I said I was going to picture it because I didn’t think it looked like a lot and I could see the child’s realisation that this is what I’ve been given to eat for a week, and just the sense of sadness.

“Where has the rest of the food gone? You know, this is meant to be a week’s food. Why is it so mean?”

“Frankly, this is one of the good things about social media, this could surface so quickly, and then colleagues in the Department for Education (DfE) were on it straight away. And they spoke to the company immediately and the company have apologised and it got sorted out.

“I think it’s good that we’re able to provide free school meals, even when the schools aren’t in, but obviously they’ve got to be decent meals and this wasn’t.

“If you’re told you’re getting a free school meal, even whilst you’re at home, and then that comes through the door, I can imagine how it makes you feel, of course.”

Children and families minister Vicky Ford said she met the managing director of Chartwells on Tuesday “and he has assured me they have taken immediate action to stop further deliveries of poor-quality parcels. They will ensure schools affected are compensated and they will provide additional food to the eligible child in line with our increased funding”.

She said the Government will demand that all caterers meet the standards set and deliver high-quality lunches to eligible children, and will set out further details on Wednesday.

MPs and sector leaders called for a review of food packages being sent to families.

DfE guidance says schools should work with their catering team or food provider to provide parcels to eligible children at home during the lockdown.

The guidance, updated on Friday, says schools can also provide meals by issuing vouchers for a local shop or supermarket, or by using the DfE’s national voucher scheme, “which will reopen shortly”.

A spokesperson for Chartwells said: “We have had time to investigate the picture circulated on Twitter. For clarity this shows five days of free school lunches (not 10 days) and the charge for food, packing and distribution was actually £10.50 and not £30 as suggested.

“However, in our efforts to provide thousands of food parcels a week at extremely short notice we are very sorry the quantity has fallen short in this instance.”

Max Davie, from the Royal College of Paediatrics and Child Health, said the Government needs to get the money for food into the pockets of families.

He told BBC Breakfast: “This is almost the third time we have messed up the basics of providing decent food for vulnerable children.

“It isn’t rocket science, you just have to get the money into the pockets of the families so they can buy food for their children.”