From visa application services to government website domains, the Tory government is running out of things to sell. 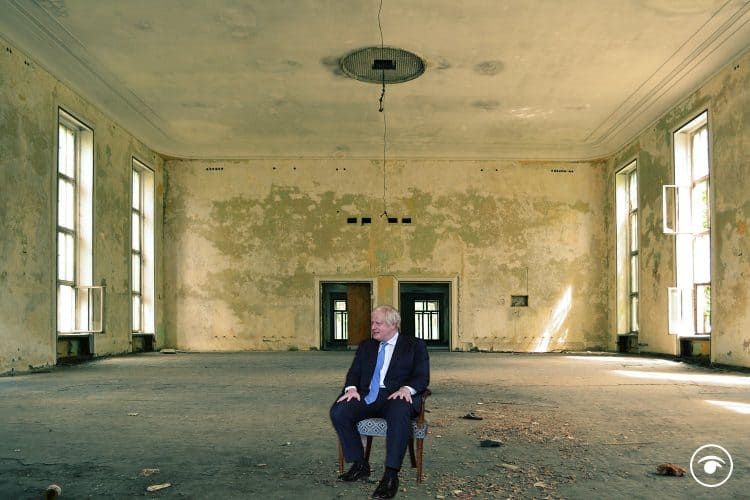 Privatisation is running rampant in Britain.

Services that have been designed, developed, tested, and paid for by the public for the public are being handed to private firms, allowing them to make a tidy profit from the public in their new role as consumers.

The language has changed starkly over the years. Professor Catherine Needham of Birmingham University co-authored a study citing the large numbers of people who want to be treated like humans when engaging with public service providers. Yet the public are now “customers”: a linguistic trick that conditions us to accept our role as consumers. The phrase “consumer choice” gives us the unconscious notion that services are poor because we selected the wrong provider.

With this mindset, it’s little wonder that the Tories are running out of things to sell.

History: Demolishing the house of Britain

Presaging Brexit and Trump, the great Sheffield musician, Richard Hawley, likened Britain to a house, saying nearly ten years ago that it was “on the edge of something pretty scary … Our country is run by very greedy idiots.” Thatcher (1979-90) “dismantled the roof and the walls,” selling British Aerospace, Airways, Gas, Petroleum, Rail, Britoil, BT, Cable and Wireless, Jaguar, Rolls Royce, and water.

Tony Blair’s Thatcher-lite New Labour (1997-2007/10) “helped to get rid of the furniture and the carpets and the pictures and the fixtures and fittings,” said Hawley, blowing a £300bn debt bubble with hospital, school, and London Underground PFI schemes. Cameron and Clegg’s Tory-Liberal coalition (2010-15) were “doing the girders and whatever [rolled steel joints] that are left,” auctioning off Royal Mail and cynically citing EU privatisation directives to justify the sale.

There’s nothing left of the House of Britain except bric-a-brac. But the dominant ideology of privatisation means that even this is being flogged.

Back in 2017, YouGov found that a whopping 87 percent of respondents thought that privatising the police was a bad idea: 10 percent didn’t know, meaning that only 3 percent wanted private policing. Yet, the public aspects of policing are gradually being chipped away.

In 1999, the now-defunct David McLean Group won a PFI contract to build the Ystrad Mynach Police Station in Wales. The current £1m contract with the company Daru ties the station to PFI until 2035. In 2001, the property firm Equion won a 25-year, £120m PFI contract to build and run stations in Bromley, Deptford, and Lewisham. A decade on, 76 percent of the people surveyed in North Yorkshire feared that further Tory-Liberal cuts would put the public at greater risk.

Just as NHS Trusts in England restructured to pay off PFI debts (“efficiency”), police services make cuts to balance the books. Enter private contractors. Then-Home Secretary and future PM, Theresa May, quietly championed a “commercial in confidence” programme as she announced a 20 percent cut in grants to local services. Contracts were auctioned at the government’s Bluelight e-tendering services website.

Under the still-unelected Johnson administration in November 2019, the Tories planned to transfer the civil enforcement officers of the HM Courts and Tribunals Service (HMCTS) to the private companies Jacobs, Marston, and JBW. The FT comments: “The bailiff-style work involves the serving of warrants for magistrates’ courts, including the powers to arrest people who have failed to pay court fines — which range from speeding tickets and TV licences to more serious offences such as assault.” An unnamed department source said it was the first time that all HMCTSs had been outsourced.

Running out of ideas

This is just the tip of the iceberg. After the obvious things like energy and telecoms were sold, successive governments scratched around for other services to outsource. Elements of NHS privatisation are well known, but what else is there? Prison privatisation began in 1992. Even the Tory grandee and pro-privateer Malcolm Rifkind authored an op-ed stating that this was a step too far.

Replacing the voluntary association National Register of Public Services, Cameron and Clegg privatised court language services, giving Capita and Applied Language Solutions a failed  £168m contract to provide interpreting services to courts, police, and prisons. Within a year, just 280 of the MoJ’s target of 1,200 interpreters had signed up. The Public Accounts Committee said: “The Ministry was not an intelligent customer in procuring language services, despite the risks posed to the administration of justice and to the Ministry’s reputation.”

By 2017, Interserve Justice and MTCnovo were raking in £150m a year, providing half of the probation services in England and Wales. Director of Interserve, Yvonne Thomas, complained that thanks to budget cuts: “Our work is going up, our payment is going down.” Then-Justice Secretary Chris “Failing” Grayling introduced 21 “community rehabilitation companies” to supervise 140,000 criminals, leaving the public National Probation Service to deal with high-risk offenders.

The party that later promised to “take back control” from foreigners with Brexit contracted HM Revenue and Customs services to the American company, Concentrix. The £75m contract saw over 300 Belfast-based staff dealing with tax credits in a service that turned into a fiasco and led to contract cancellations.

Under the cruel Tory-Liberal social security cuts, the French firm Atos infamously tormented thousands of disabled claimants via Work Capability Assessments at the Department for Work and Pensions. Specialists note that by 2014, “IT at the [DWP] was fully outsourced.” By 2019, the services were automated, loading “customer” (once known as claimant) data into clouds.

What’s left and why it matters

Serco was recently awarded a DWP Universal Credit telephony contract, which the PCS union describes as “a tactical decision made by DWP Executive Team rather than a decision imposed on them by Government,” such is the depth of internalisation for outsourcing.

The party of national defence has also seen the privatisation of elements of the military. Capita reportedly took over the management of 2,000 staff at 53 Ministry of Defence fire stations in the UK and abroad. The party that’s tough on immigration cares about British borders so much that even visa application services are privatised. In 2013, the French firm Teleperformance acquired the Scotland-based TLScontact, which now processes visa applications across the UK.

Sometimes privatisation is particularly distasteful. After the bombings in London in July 2005, the government’s progress review was properly published on the .gov.uk domain, as were the final Coroner’s Inquests. This time, under the alleged patriot Johnson, the inquiry into the Manchester Arena bombing was registered to .org.uk to the German company 1&1 IONOS at an IP address owned by Host Europe GmbH, another German company that describes itself as providing “professional business solutions.”

All of this matters because YouGov data suggest that the longer services are in private hands, the less people want them put back into public ownership. The NHS is de facto privatised, but not officially, neither are police or the armed forces. Support for public ownership in these sectors is above 80 percent. Yet, the older the industry, the less people care. Around half want energy—which was privatised forty years ago—back in the public sector. Nearly six in ten want water renationalised, yet for the more recently privatised Royal Mail, the percentage is just 65.

This means that as the generations go by and people acclimatise to being “customers” who pay twice for private services, it will be harder for the Labour party to campaign on a platform of renationalisation: if we can move the party back to the left, that is.