Seven minutes everyone needs to watch to understand the mess we are now in. 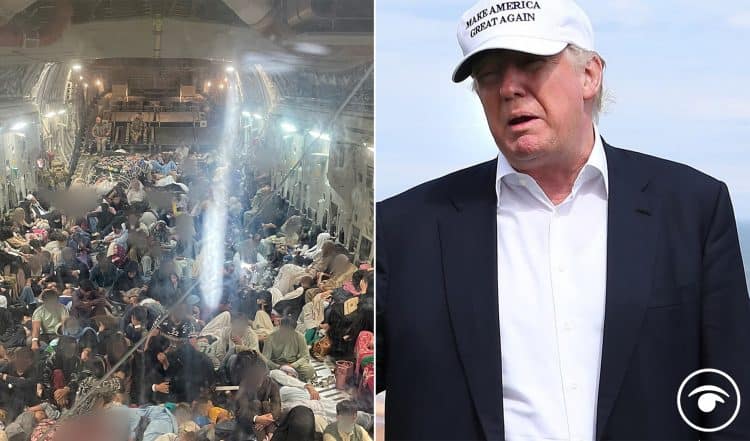 Joe Biden has come under pressure for the sudden withdrawal of the US troops from Afghanistan which has left a vacuum for the Taliban to take over, gaining more territory than they had before the US-led invasion in 2001.

“When I came into office I inherited a deal that President Trump had negotiated with the Taliban,” Biden said at the White House in his defence.

It has led to prime minister Boris Johnson having to intervene, with G7 discussions set to take place today.

The Conservative leader promised “to use every humanitarian and diplomatic lever” to protect human rights in the country, but it is still unknown whether he will be able to push the US to extend its presence in the country past August 31 to allow the evacuation effort more time.

But where does former US president Donald Trump fit into all of this?

Trump launched a sustained attack on president Joe Biden’s handling of the retreat of US forces from Afghanistan, which he called “the greatest foreign policy humiliation” in the country’s history.

“This is not a withdrawal. This was a total surrender,” he said.

Trump said the Taliban, with whom he had negotiated, respected him. He suggested the quick takeover of Afghanistan would not have happened if he was still in office.

“We could have gotten out with honour,” Trump added. “And instead we got out with the exact opposite of honour.”

In response, the BBC’s Ros Atkins has filmed another great piece looking into Trump’s role in dealing with Taliban which has directly impacted on the horrifying scenes we have seen over the last two weeks.

It is a must-watch.

To understand what’s happening in Afghanistan now, we need to look at Trump’s deal with the Taliban in 2020. 7 minutes on what’s in it and why it matters. Produced @TomBrada1991. https://t.co/yRjODXmZ7j pic.twitter.com/rHSneUzst1