"Are you too scared, heartless or are you stupid, Richard? Do you not understand?", he was asked. 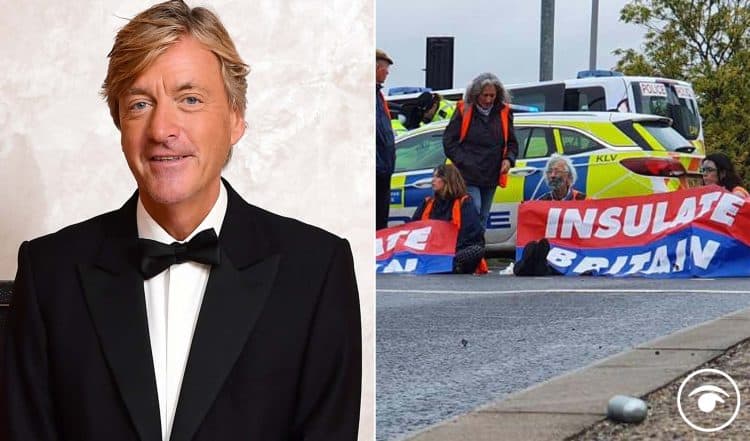 Richard Madeley came to blows with an Insulate Britain campaigner this morning on live TV.

The Good Morning Britain presenter found himself in a war of words with the climate activist who defended renewed action on the streets.

It comes as environmental protesters were squirted with ink as they blocked Britain’s roads amid frustration from motorists.

Car horns blared as demonstrators sat in front of vehicles on Wednesday morning for a 16th day of protest.

Dozens of Insulate Britain protesters have been arrested after blocking a junction of the M25 and a major London road.

Campaigners from the Extinction Rebellion splinter group disrupted the slip road at junction 1a of the UK’s busiest motorway as well as the A40 in west London, with many gluing themselves to the surface.

Others were arrested before they managed to block a roundabout close to the Dartford Crossing in Kent.

Addressing Madeley, she said: “All of our children are in trouble. You have to stop this. Are you too scared, heartless or are you stupid, Richard? Do you not understand?”

Defending himself, Mr Madeley said: “You said that five times, I’m not stupid and I’m not heartless and I don’t really like you patronising me.”

He asked: “So let me ask you personally, straightaway, what if that woman had been your mother?” he queried.

“Would you still think you’ve done the right thing if you put your mother into, basically, a coma?”

After being questioned by Richard again, she said: “If you know someone having a stroke phone an ambulance, that’s the responsible method. You’re going to let me finish, Richard.”

She added after clashing with the presenter: “If it was my mum, of course, at the time I would be furious and heartbroken.”