"A 40 watt bulb is brighter than Raab," wrote one Twitter user. 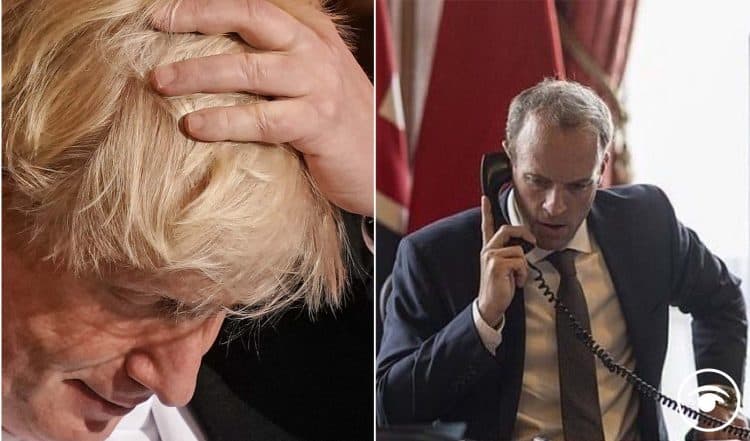 Boris Johnson is facing warnings from his own MPs that he urgently needs to rebuild public trust after admitting he “crashed the car into a ditch” in the row over standards at Westminster.

However, Dominic Raab told the BBC that we can have total faith in the PM as he successfully dealt with Brexit.

Raab insisted ministers are committed to “fixing the problem” amid continuing frustration and anger among Tory MPs at the damage that has been inflicted over the past weeks.

At a private meeting of the Conservative backbench 1922 Committee on Wednesday, Mr Johnson took responsibility for the Government’s botched attempt to get Owen Paterson off the hook after he was found to have broken the rules on paid lobbying.

“On a clear day I crashed the car into a ditch. I will get the car out of the ditch,” he reportedly told the gathering.

Mr Raab acknowledged the Government has a job of work to do to restore morale within the Conservative ranks after seeing the party engulfed by allegations of Tory “sleaze”.

Asked on Sky News about discontent within the party, he said there is always “one or other disgruntled individual” who is prepared to complain anonymously in the media.

Pressed on whether that means there is no general unrest, Mr Raab added: “Not sure I’d put it in that idyllic way. There’s always debate amongst MPs, but the most important thing is we’re fixing the problem.”

Mr Johnson’s appearance before the 1922 Committee was the culmination of weeks of pressure following the fiasco over the attempt to save Mr Paterson from suspension.

The former Cabinet minister had been found to have breached lobbying rules by the Parliamentary Commissioner for Standards but a Government-backed amendment attempted to save him from suspension and overhaul the whole standards process.

The Government U-turned on the idea after a backlash and Mr Paterson resigned as an MP, but the saga kicked off a deep dive into standards in public life, with a focus on second jobs.

Appearing before the Commons Liaison Committee on Wednesday, Mr Johnson admitted the initial effort to shield Mr Paterson had been an error.

“The intention genuinely was not to exonerate anybody, the intention was to see whether there was some way in which, on a cross-party basis, we could improve the system,” he said.

“In retrospect it was obviously, obviously mistaken to think we could conflate the two things and do I regret that decision? Yes I certainly do.”

Raab’s comments have got a few people chatting on social media. Was he asleep at the wheel?