Footage shows him grappling with the youngster before he booted the boy "like a free kick in football". 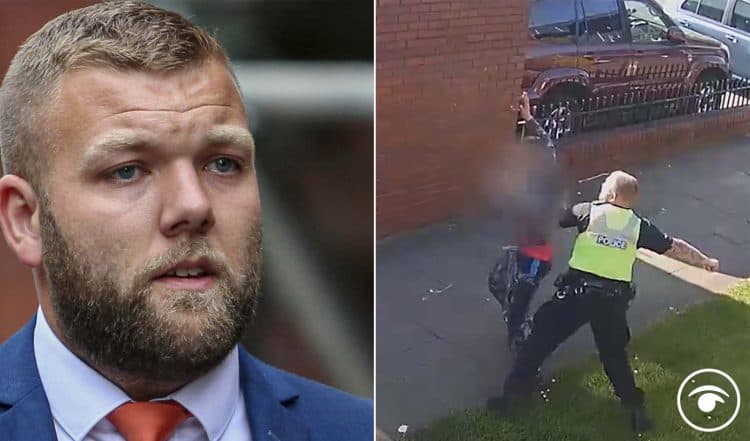 A rogue police officer who was caught on CCTV attacking a black teenage boy and a black cyclist while on duty has been sacked from his force.

Declan Jones, 30, was found guilty of assaulting two members of the public after the brutal broad daylight attacks were caught on camera during lockdown last April.

The West Midlands Police officer first dragged Michael Rose, 44, off his bicycle in the middle of the street – before punching him three times in the back.

Disturbing footage shows Jones appearing to bang Mr Rose’s head on the bonnet of the patrol car while his female colleague holds him down.

He then punched his victim again, kneed him in the side and body-slammed him on the car while making the arrest in Frederick Road, Aston, Birmingham.

The next day Jones was caught on camera kicking a 15-year-old on the ground during a stop and search after wrongly accusing him of possessing drugs.

Footage shows him grappling with the youngster on Melbourne Avenue in the Newton area of the city before he booted the boy “like a free kick in football”.

Jones claimed he had acted in self-defence but he was found guilty of using unlawful force following a five-day trial at Coventry Magistrates’ Court last month.

The officer of five years, who was based in Handsworth, was suspended last May pending an investigation by the Independent Office of Police Conduct (IOPC).

He has now been dismissed from West Midlands Police without notice for gross misconduct following a dispclinary hearing on Tuesday (7/9).

“The officer’s conduct has fallen far below what ought to be expected of any police officer.

“His conduct is criminal and has caused a serious impact upon the public view of West Midlands Police.

“His criminal behaviour is against everything this force stands for. I apologise to his victims.

“His behaviour has no place in policing and undermines our efforts.

“However, this case will reinforce the view of some that his bad behaviour has only been acted upon because of clear CCTV.

“That other incivilities towards Black people do not receive the attention that is unavoidable in this case.

“Whilst I do not believe this to be true, as a force and a group of professionals we fail if we do not confront the realities of this view and the fact that force is used by us disproportionately on Black men.

“There is more that needs to be done by the force, and each of us, to address this. We do police an unequal society and there will be disparities.

“Where they exist, we must account for them and take action to demonstrate we are acting fairly and in the public interest.”

The West Midlands Police and Crime Commissioner Simon Foster added: “The case of PC Declan Jones is deeply concerning and my thoughts are with his victims.

“For an officer entrusted with policing powers to act in the way he did cannot and will not be tolerated.

“I am pleased the force has acted quickly and decisively in this case to protect the public and I stand shoulder to should with them on this.

“At the end of the criminal justice process, I will examine what action might be appropriate via the pension forfeiture process.”

PC Jones, who did not attend the hearing at the force’s Lloyd House HQ, will be sentenced for the assaults on Friday (10/9) at Birmingham Magistrates’ Court.

JPs were told previously that both victims were of good character after Jones had accused them of merely trying to seek compensation.

He added: “PC Jones was abusing his powers and was not using reasonable force.

“When a police officer can be seen on a video to kick at a 15-year-old boy on the ground, people would lose faith in the police force.

“The videos do not show the police in a good light at all.”