"What is most shocking about this apart from the fact that a fox was brutally ripped apart by a pack of hounds is the complete casualness and nonchalance of those involved and watching." 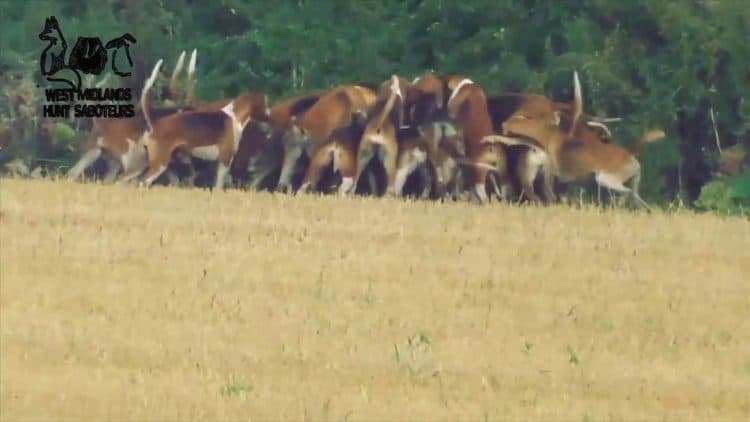 Police have launched an investigation after shocking footage emerged showing a fox being savaged to death by a pack of crazed hunt hounds.

Members of the Warwickshire Hunt were recorded by saboteurs allegedly using their dogs to kill the animal during a meet in Chadshunt, Warks., on Monday (6/9).

A pack of around 20 hounds can be seen in graphic footage swarming around the fox before clambering over each other to tear it to pieces.

Meanwhile, huntsmen stand around and sit on horseback – appearing to do little to call off the attack as the dogs drag away chunks of flesh.

Warwickshire Police has now confirmed they are investigating the attack after the footage emerged on social media earlier this week.

A force spokesperson said: “We received a report of a fox being killed near Kineton Road, Gaydon at around 9am on Monday.

“Enquiries are ongoing. Anyone with information can call 101 quoting incident 243 of 6 September 2021.”

West Midlands Hunt Saboteurs said the prestigious hunt met in Kineton, Warks., and claimed they later deliberately sought out the nearby fox den.

A spokesperson for the group said: “This was no ‘accident’, the Warwickshire Hunt can’t claim they accidentally came across this fox.

“There was no pretence at even laying and following a trail. The huntsman has been at the Warwickshire Hunt for a long time now and will know his hunt country well.

“The fact that he headed across the road and straight up to what he would have known was an active fox den shows that this was very much a deliberate act of hunting.

“He then let his hounds run up and down it until inevitably they found the fox and killed it.

“At no point prior to the hounds killing the fox did the huntsman or anyone from the hunt stop the hounds.

“Members of the hunt were all happy for the hounds to be running up and down an area that contained a fox den.

“What is most shocking about this apart from the fact that a fox was brutally ripped apart by a pack of hounds is the complete casualness and nonchalance of those involved and watching.

“No one rushes over to stop the hounds.

“The riders just stand watching before casually moving on to the next bit of land to hunt as if a fox being killed is an everyday normal occurrence.”

The Warwickshire Hunt said the “unfortunate incident” happened when a fox “unexpectedly” came from an area where trails had been laid.

A spokesperson from the hunt said: “While the Warwickshire Hunt were trail hunting on Monday, 6th September, it appears that a fox unexpectedly came out of the area beside where trails had been laid beforehand.

“It all happened very suddenly and nobody was able to prevent the unfortunate incident from happening.

“The hunt reported this incident to the police on the day and will assist them with any further enquiries.”