“The bill represents a massive assault on civil liberties and it’s part of a wider trend on the part of the government to shut down free speech, shut down protest, shut down dissenting voices. In a sense it’s an attack on a fundamental democratic value, which is the right to raise our voice in criticism, in protest, in dissent. 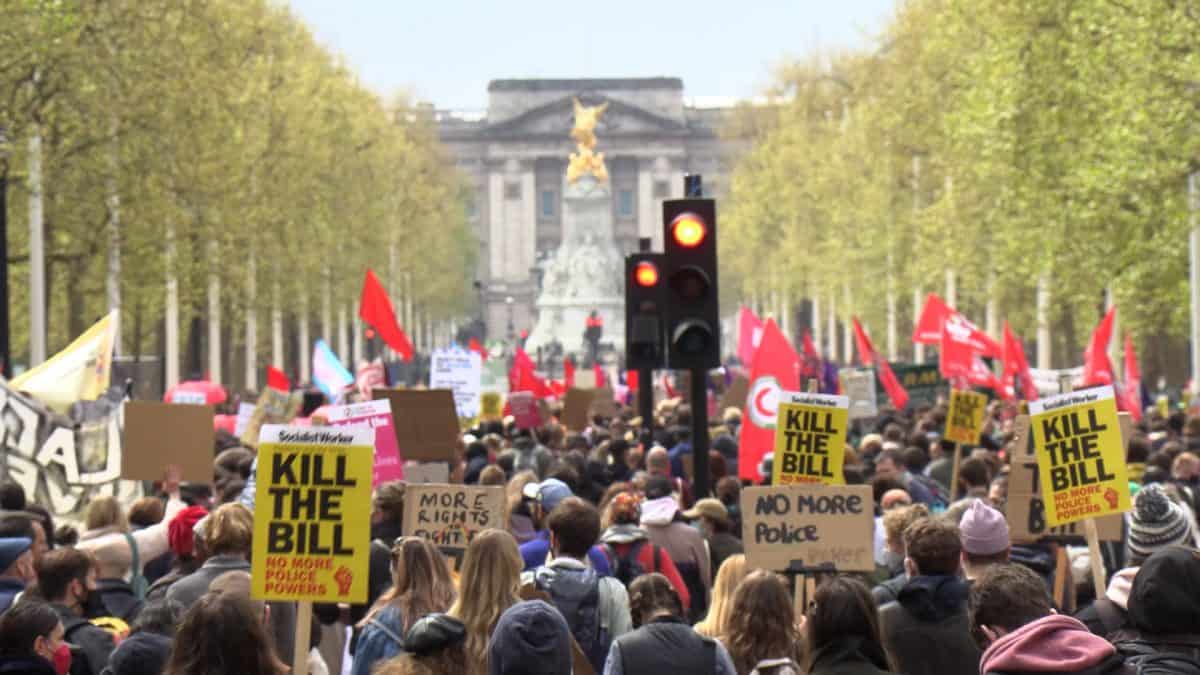 Demonstrators walk down the Mall during a 'Kill The Bill' protest against The Police, Crime, Sentencing and Courts Bill in London. Picture date: Saturday May 1, 2021. Credit;PA

Thousands of people have gathered in central London to demonstrate against a proposed bill which will hand greater power to police to shut down protests deemed overly noisy or disruptive.

It is the latest in a series of protests against the Police, Crime, Sentencing and Courts Bill.

Thousands of protesters congregated around Trafalgar Square and the Mall for the “Kill the Bill” demonstration from midday on Saturday.

Later in the afternoon, the demonstrators headed towards the Home Office.

The Bill was drafted partly in response to previous disruptive action by both groups.

Commander Simon Dobinson, of the Metropolitan Police, said ahead of the protests: “We have attempted to make contact with the organisers of Saturday’s demonstrations.

“It is their responsibility to comply with the regulations and ensure their gathering is safe.

“Officers will be present to try to engage with protestors, to explain the restrictions, encourage compliance and take steps to enforce the restrictions if it is necessary to do so.

“Anyone intending to engage in violence or disorder needs to understand that police we will take steps to prevent that behaviour. We will not tolerate attacks on our officers and staff.”

The Guardian reports that Pragna Patel, director of Southall Black Sisters, said: “The bill represents a massive assault on civil liberties and it’s part of a wider trend on the part of the government to shut down free speech, shut down protest, shut down dissenting voices. In a sense it’s an attack on a fundamental democratic value, which is the right to raise our voice in criticism, in protest, in dissent.

“We are really, really alarmed by the government’s thrust towards authoritarianism. This represents one in a long line of draconian laws which the government is bringing in which will impact on our fundamental rights.”

Kill the Bill Protest turns into a rave at Vauxhall Pleasure Gardens pic.twitter.com/wqH8qNZjtM

Similar protests were staged in Sheffield, Manchester and Newcastle.

In Newcastle, demonstrators faced off against officers who blocked them from accessing a police station.

One witness told the PA news agency: “Police closed the road and stopped access, there were a couple of scuffles and a few protestors were detained.

“After 30 minutes or so the protestors seemed to realise they wouldn’t get through so moved on.”

In Sheffield, demonstrators took the knee and gave the black power salute in a park close to the city centre, before marching towards City Hall.

Protestors in Manchester occupied Portland Street in the city centre.

Some of the most violent protests have been seen in Bristol – where the statue of slave trader Edward Colston was ripped down last summer – with 42 people arrested following a demonstration in March.

The city’s 11th protest was scheduled to commence at 5pm this May Day, beginning at College Green.

A Home Office spokesman said: “The right to protest is a cornerstone of our democracy, but over recent years we have seen an increase in the use of disruptive and dangerous tactics.

“It is totally unacceptable to smash up private property, block emergency vehicles and prevent the printing press from distributing newspapers.

“The Government will not stand by as the rights and freedoms of individuals, businesses and communities are trampled upon by a minority.

“These new measures will not stop people from carrying out their civic right to protest and be heard, but will prevent large scale disruption – enabling the silent majority to get on with their lives.”

The Kill the Bill demonstrations coincided with Extinction Rebellion’s “Protest of One” campaign, which saw hundreds of people up and down the country stage one-man road blocks in protest at the Government’s lack of action on climate change.