Nice to see our tax money being put to good use, hey? Matt Hancock was forced to eat a selection of horrific 'foods' on I'm A Celebrity... 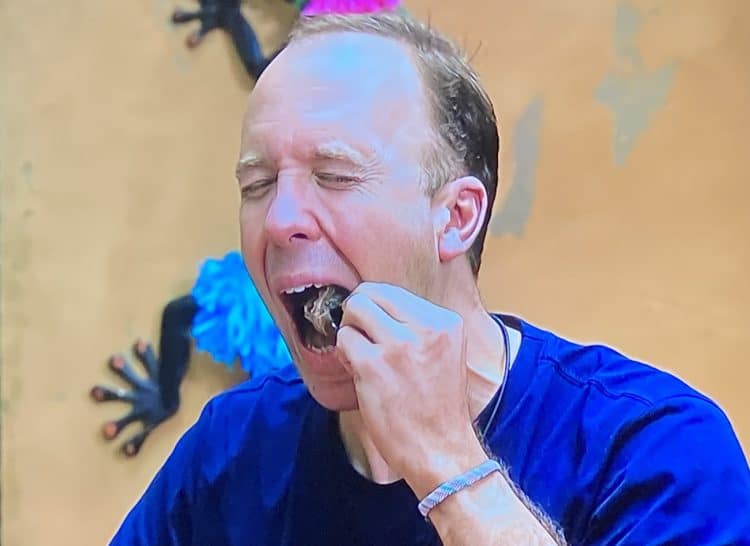 Be honest: This is the only redeeming thing about Matt Hancock taking £400,000 to go into the jungle, isn’t it? The public got what they craved on Friday evening, as the former Health Secretary was put through a disgusting Bushtucker Trial on I’m A Celebrity.

The popular ITV reality show, which puts famous faces through a gruelling set of conditions in the Australian outback, received an almighty backlash earlier this month when it was revealed that Matt Hancock would be one of the contestants.

He entered the camp earlier this week, and was immediately challenged by some of his fellow jungle-dwellers. Following a public vote, the controversial Tory was elected to take part in an eating challenge. The menu was a little different to that of the House of Commons, though.

What did Matt Hancock eat on his Bushtucker Trial?

Matt Hancock was forced to eat items including a camel’s penis, a sheep’s vagina, and a cow’s anus. The politician was left GAGGING after finishing the challenge by eating cockroaches. He squirmed, and he grimaced – but the much-maligned figure DID NOT throw-up.

He was joined in the challenge by Boy George, who also performed admirably. In one hilarious exchange, the singer-songwriter asked Matt Hancock if it was a bad time to say ‘he has never voted for the Tories’. The pair managed to to keep down every single dish.

Boy George ‘holds his own’

The sight of Mr. Hancock wolfing-down animal genitalia was, at the very least, something to behold. What this venture means for his political career remains to be seen, however.

The former Cabinet Member recently claimed that he was on the show to ‘connect with the electorate in a different forum’. Forgive our observations Matthew, but can you really talk about serious political issues when there is a cow’s arse in your gob?