The group claims their footage shows evidence of "death threats, animal abuse and road chaos" as well as a fox being illegally chased across fields. 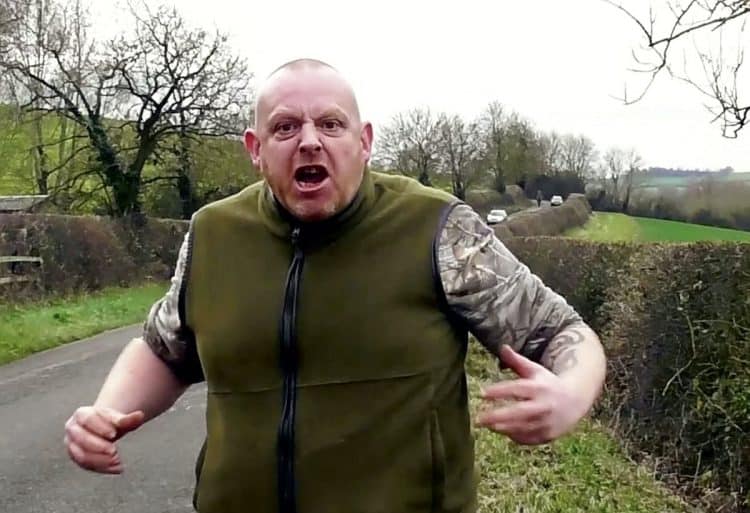 Saboteurs come across a man on a country lane who they claim was a hunt supporter. Credit;SWNS

Shocking footage shows a huntsman violently battering his horse with a whip and a raging man appearing to scream foul-mouthed death threats at animal activists during a hunt.

The group claims their footage shows evidence of “death threats, animal abuse and road chaos” as well as a fox being illegally chased across fields.

One member of the hunt can be seen aggressively striking his horse with a riding crop forcing it to recoil as it refuses to cross a wooden bridge.

The footage emerged a day after teacher Sarah Moulds was sacked for punching and kicking a horse during a hunt in a video which caused national outrage.

Another clip shows the saboteurs coming across a man on a country lane who they claim was a supporter watching the hunt.

He is filmed swearing at one of the group in a foul-mouthed “tirade of sexist and threatening abuse” as he confronts the woman holding the camera.

The man can be seen marching over to her and telling her: “You’re a gobsh*te. You’ve got a f***ing gob on you.

“You thinking pointing a f***ing camera in my face is going to do a f***ing thing?

“F**k off bitch, you just leave me alone. What have I done to you?

“What do you think your life is worth? Get that camera out of my f***ing face.”

After being told he is being threatening, he screams at her: “I don’t give a f**k. F**k off.

“You are filming me, not the f***ing hunt. Get the camera out of my face.

Saboteurs then filmed what appears to be a fox being hunted by hounds and members of the hunt causing traffic chaos as they rode along the busy A4035 road.

A West Midlands Hunt Saboteurs spokesperson said: “With Boxing Day the biggest date on the hunting calendar almost a week away, the Warwickshire Hunt have in this video provided a snapshot of what fox hunting is all about.

“To begin with one rider was filmed wacking his horse hard with his riding crop after it refused to walk over a bridge with him.

“Unfortunately this probably won’t surprise anyone as we all know that fox hunters care little for their animals.

“When you go out abusing one animal, a fox, abusing other animals will become second nature.

“Next we see the true aggressive nature of fox hunt supporters when one supporter seems to wind himself up just at the mere sight of saboteurs near him.

“Finally there is the illegal fox hunting…then comes the arrogance.

“When the hounds inevitably dash across the road the rest of the hunt follow suit holding the busy road up so they can use it as their own personal playground.

“Not caring that they are holding innocent commuters up or for the safety of their hounds being on or close to such a busy road.

“In the end what links all these events is violence. A fox hunt by its very nature is violent.

“We are still baffled as to what exactly he was so angry about.”

“The individual filmed, who is not with the hunt, was passing by and while he stopped to watch the hunt he was then followed, filmed, targeted and provoked by individuals from a group that deliberately sabotages our lawful activities, which includes someone criminally convicted for fabricating evidence against a hunt.

“The hunt does not condone violence or threatening behaviour under any circumstances nor should its members have their personal privacy abused.

“Members of the hunt are from a wide cross-section of society, most of whom have animals under their care.

“They are dog and horse lovers with a great deal of experience in looking after their well-being.

“Questions must be asked as to the credibility of these extremists’ motives and the constantly fabricated, highly edited stories they feed to social media with the sole purpose of attacking and intimidating private individuals and businesses.

“Today, one of our members was physically attacked by one of the balaclaved extremists; luckily he was not badly hurt.”