"Really nice to see Therese taking food poverty seriously and not just sitting there like a smug landlord." 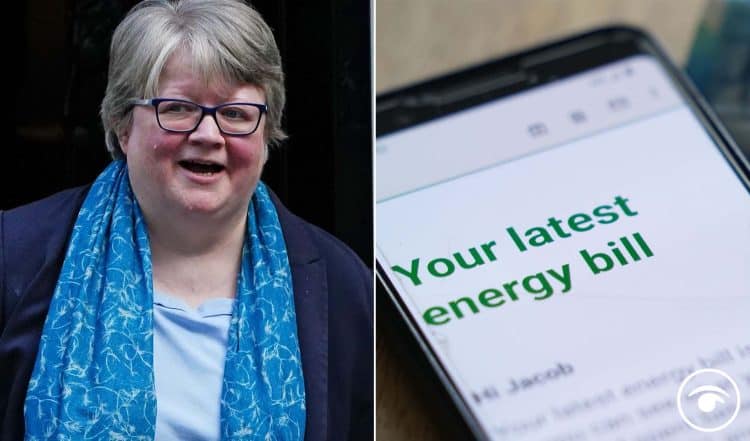 Work and pensions secretary Therese Coffey has come under fire from an SNP MP who was left ’embarrassed’ by her lack of an answer when questioned about Tory welfare polices negatively impacting to the cost of living crisis.

Chris Stephens, the MP for Glasgow South West, wrote: “At the DWP Select Committee, I questioned Theresa Coffey. I was frankly embarrassed and left frustrated by the Minister’s lack of an answer.

“There was no recognition of the impact of UK Tory welfare policies on food insecurity and challenges with the cost of living.”

It was hard not to feel that her answers came across as quite smug as she deflected pretty much everything to ‘Defra,’ and barely answered any of his series of questions.

It is worth remembering she claimed £200,000 on expenses while cutting the nation’s benefits.

During the same session the work and pensions secretary defended the Government’s approach to uprate benefits based on inflation data from five months ago that pre-dates the recent cost of living rises.

Coffey said it was a reasonable and sensible decision to base the annual increase for inflation-linked benefits and tax credits on data from last year.

The government minister was asked by MPs if this will leave people in an “impossible position for the next year”.

She said: “We have this consistent approach using the same index year on year… inflation moves around and I think it was a reasonable approach to continue with that consistency.”

Ms Coffey also suggested energy suppliers have started using billpayers as their “cash flow”, as she recalled how her standing orders for utilities were increased.

She said: “I’ve had to go back and get them to bring back down my standing order because it’s not in line with my bills, and people can ask for that to be reviewed and they can go to Ofgem if they want to make a complaint.

“To some extent I think some of the energy suppliers started using billpayers as their cash flow.”

She added that the support package announced by Chancellor Rishi Sunak to help people through cost of living pressures is “substantial” and she is “not aware” of plans to increase it.

If that wasn’t enough Coffey and a Labour MP also had a terse exchange after he brought up “a rumour” that she was preparing to resign.

Neil Coyle MP, disgruntled at what he saw as Coffey’s inability to answer Work and Pensions Committee questions, asked the Cabinet minister whether she had “one foot out the door”.

But Ms Coffey hit back by calling suggestions she was considering quitting “ridiculous”, and appeared to issue her own subtle threat to bring up “other stuff that happened downstairs” in her reply to the opposition figure.

Mr Coyle told the work and pensions secretary on Wednesday it was “really disappointing that you’ve turned up and been unable to answer so many questions”.

His remark came after the Conservative minister asked to come back to the committee about a question on “yellow card” sanctions for those on benefits.

Offering a defence to the accusation, Ms Coffey said she either did not recall some details or was being asked about other departmental briefs.

The Bermondsey and Old Southwark MP followed up by asking: “There was a rumour the Secretary of State is going to resign.

“Is that the reason you can’t answer any questions today, because you’ve got one foot out the door?”

The Cabinet minister replied: “No, don’t be ridiculous Neil.

“If you want to bring up gossip, I could bring up other stuff that happened downstairs.

“I don’t think that’s appropriate for this select committee, thank you.”

Mr Coyle retorted: “I can discuss that stuff any time.”