Saboteur Mel Broughton, 61, was rushed to hospital after confronting a hunt steward in Leicestershire. 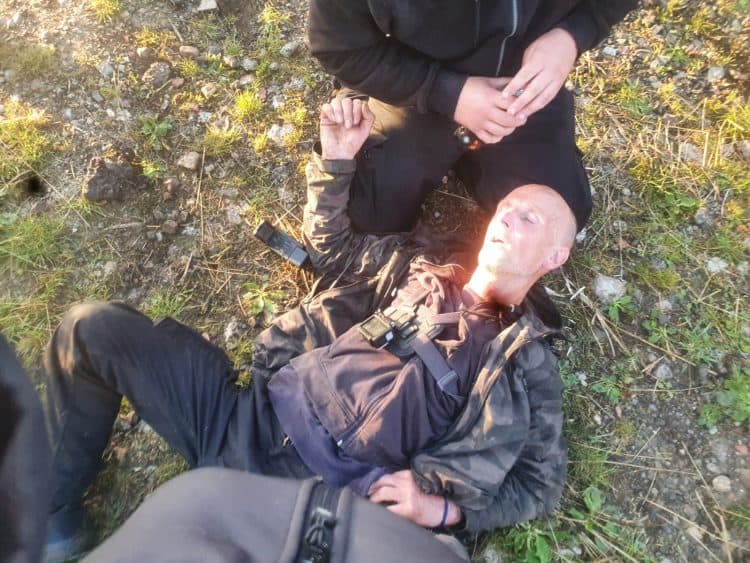 An anti-fox hunting protestor had two ribs broken in a brutal attack by a steward, leaving him “in and out of consciousness” before he was rushed to hospital.

In shocking footage seen by The London Economic, members of the Northants Hunt Saboteurs were allegedly accosted by a hunt steward as they sought to disrupt a meeting of the Cottesmore Hunt in Leicestershire on 18 September.

As the saboteurs sought to climb into the field where the hunt was taken place, the steward “started to assault people”, 26-year-old Luke Tucker – a member of the group who was present – said. The landowner had given the saboteurs permission to be on his land, he added.

The steward “grabbed me by the neck”, Tucker told TLE – but his colleague Mel Broughton, 61, was left with serious injuries after being “attacked and pulled clean off” a gate.

“He’s broken two ribs,” Tucker said. “He was on the floor in a lot of distress and pain, struggling to breathe, going in and out of consciousness before being rushed to hospital.”

Broughton – who started disrupting hunts in the area in the 1980s – was attacked by the same steward on a public footpath two years ago, Tucker said. But assailant – who he described as “a big thug who will attack us and stop us from stopping the hunt” – was acquitted in court.

Tucker said: “They keep doing it to us and they keep getting away with it. There’s always a fairly high level of aggression, but this is one of the most serious incidents we’ve had.”

Despite the violence, the Northamptonshire-based group are determined to continue taking on fox hunters.

“It does nothing but make us more determined to shut the hunt down,” Tucker said “As a group that is our aim – to shut the Cottesmore Hunt down. We are there 99.9 per cent of the time – and we’ll be back there this weekend.”

A spokesperson for Leicestershire Police said: “Shortly before 8am on Saturday (18 September) officers were approached in Launde Road, Tilton on the Hill, stating that a man had been assaulted.

“It was reported that the victim, a man in his 60s, was pushed or pulled from a gate while trying to climb over it.

“The suspect was not at the scene and the victim was taken to hospital for treatment. Enquiries into the incident are continuing.”

Fox hunting was banned in 2005 – but “trail-hunting”, a controversial practice in which hounds and riders follow a scent path, is still legal.

The National Trust could ban the sport on its land as soon as next month, with members poised to dove on the hugely divisive issue.

Although hunters say the practice is within the bounds of the law and does no harm to animals, critics say a number of hunts repeatedly commit breaches.

Many believe that trail-hunting is being used as a “smokescreen” for fox hunting – and animal rights groups argue it offers little protection for foxes.

Last year, Environment Secretary George Eustice said there was a “settled consensus” for the Hunting Act to remain unchanged, amid controversy that trail-hunting was being used as a “smokescreen” for the banned practice.

Eustice said that despite there being “strongly held views” on both sides of the debate, there are no plans to change the Hunting Act, which has banned fox hunting since 2005.

Speaking to ITV News in November 2020, he said: “At a political level, there’s a settled consensus now that the Hunting Act should stay.”

You can view footage of the alleged attack below.