“Those 50 seconds that Erdoğan made Putin wait, looking frazzled in front of cameras say plenty of how much has changed after Ukraine." 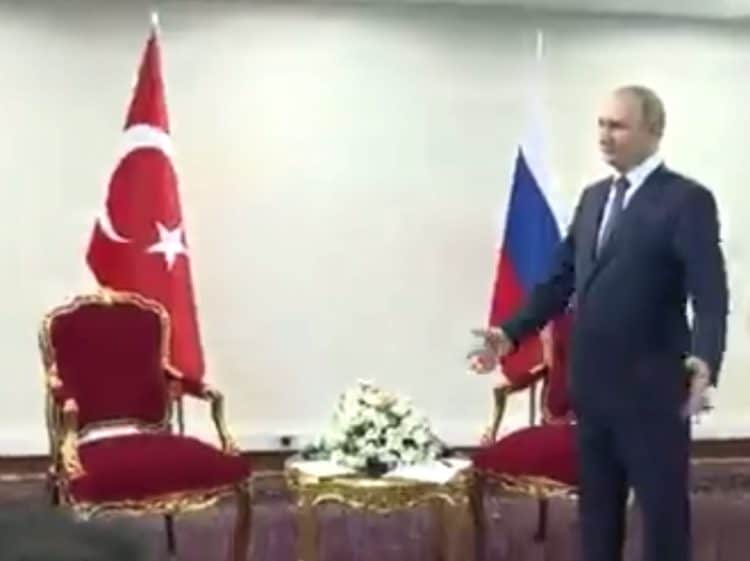 Russian President Vladimir Putin arrived in Iran on Tuesday for a visit intended to deepen ties with regional heavyweights as part of Moscow’s challenge to the United States and Europe amid its war in Ukraine.

In only his second trip abroad since Russian tanks rolled into Ukraine in February, Putin is scheduled to hold talks with Iran’s President Ebrahim Raisi and Turkish President Recep Tayyip Erdogan about the pressing issues facing the region, including the conflict in Syria and a UN-backed proposal to resume exports of Ukrainian grain to ease the global food crisis.

Putin is seeking to bolster ties with Tehran, a fellow target of US sanctions and a potential military and trade partner.

In recent weeks, Russian officials visited an airfield in central Iran at least twice to review Tehran’s weapons-capable drones for possible use in Ukraine, the White House has alleged.

The Tehran trip offers Putin a chance for a high-stakes meeting with Erdogan, who has sought to help broker talks on a peaceful settlement of the Russia-Ukraine conflict, as well as help negotiations to unblock Ukrainian grain through the Black Sea.

NATO member Turkey has not imposed sanctions on the Kremlin, making it a sorely needed partner for Moscow. Grappling with runaway inflation and a rapidly depreciating currency, Turkey also relies on the Russian market.

But judging by this tense exchange, the country’s two leaders are still not the best of friends.

Reporters captured the moment Putin strode into the room on Tuesday in the expectation Erdoğan would swiftly follow suit. Instead, he was left standing amid the sound of camera shutters.

Some speculated it may have been payback for a 2020 meeting in Moscow that saw Erdoğan wait so long to enter the meeting room that he took a seat.

“Those 50 seconds that Erdoğan made Putin wait, looking frazzled in front of cameras say plenty of how much has changed after Ukraine,” Joyce Karam, senior correspondent at Middle Eastern media organisation National News, said in a Twitter post.