He accused the senior Tory of being “just another Eton millionaire” who looks down on disabled people. 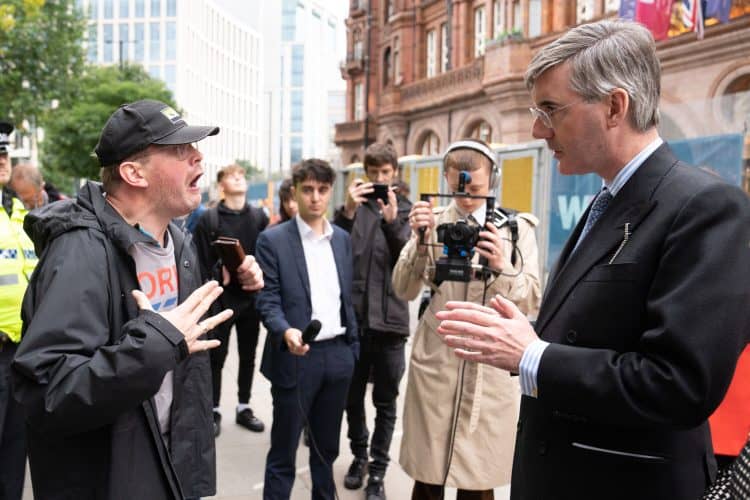 A disability activist has berated Jacob Rees-Mogg on a Manchester street, accusing the senior Tory of being “just another Eton millionaire” who looks down on disabled people.

Dominic Hutchins, who has cerebral palsy, challenged the Commons leader on the Government’s track record on disability rights outside the Conservative Party conference on Monday afternoon.

The campaigner took the minister to task over policies that he blames for causing the loss of his job as a youth worker and saw him undergo a “humiliating” test to prove his disability.

Mr Rees-Mogg calmly defended the Government’s approach as being “there to support” people as he stopped to talk to the 43-year-old member of the Disabled People Against Cuts group.

But Mr Hutchins told him: “You’re just another Eton millionaire Tory who looks down on disabled people.”

He accused the minister of talking “rubbish” and accused him of being “shameful”.

“I’m sorry you think that but I wish you well in your search for a job, I really do,” Mr Rees-Mogg responded.

Mr Hutchins asked if he would speak to Prime Minister Boris Johnson following the exchange.

“I’m sure he will know your point,” Mr Rees-Mogg replied.

After their discussion, Mr Hutchins explained why he challenged the minister.

He said three years ago he had to undergo testing to over his eligibility to receive Personal Independence Payments and to “prove I still have got a disability”.

“I’ve been disabled since birth,” he said. “It was very degrading and it was so humiliating.”

Mr Hutchins, who said he has a degree in youth work, also holds the Tories responsible for losing his job in 2014, when cuts meant the Government “closed all the youth services”.

A parish councillor in his hometown of Disley, in Cheshire, Mr Hutchins ran for Labour but said he recently left the party because he felt leader Sir Keir Starmer “isn’t challenging the Government enough regarding disability rights”.

Mr Hutchins acknowledged that Mr Rees-Mogg had stopped to talk with him rather than continuing into the safety of the Tory conference.

“But I don’t believe it will do any good. There are a lot of disabled people who can’t speak up so I think it’s very important that those who can do – because if I don’t nobody is going to,” Mr Hutchins said.