"I don't think I have seen a more idiotic plan in all my years covering news." 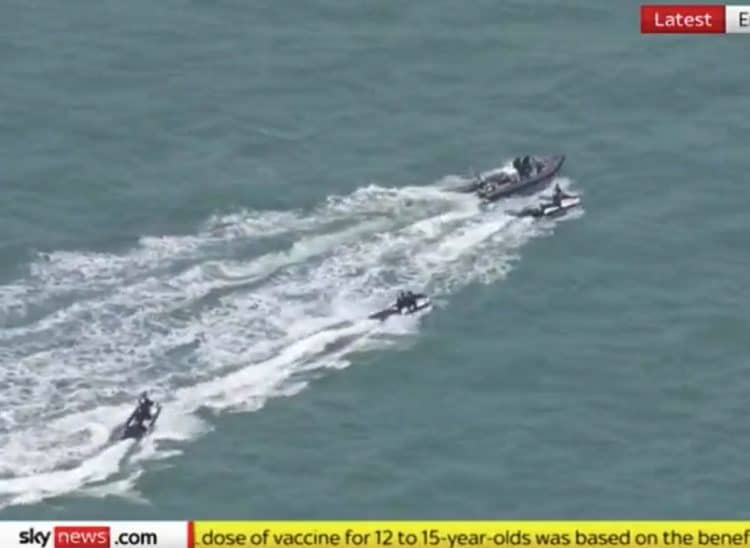 Border Force officers have been filmed carrying out drills in the Channel using what are thought to be high-powered, armoured jet skis to physically turn dinghies around before escorting them back to France.

The complicated manoeuvre requires two jet skis to circle the boat, with one pushing it back from the bow and the other nudging the stern at its motor, according to The Sun.

Border Force appeared to be carrying out exercises on Monday afternoon off the coast of Dover which – according to reports from eyewitnesses – involved jet skis manoeuvring around a dinghy while other larger vessels were stationed nearby.

The Home Office said it does not routinely comment on maritime operational activity relating to border security.

But a department spokeswoman said: “As part of our ongoing operational response, we continue to evaluate and test a range of safe and legal options for stopping small boats.

“All operational procedures used at sea comply and are delivered in accordance with domestic and international law.”

The Home Office would “continue to explore all options available” to reduce the number of crossings, the spokeswoman added.

First footage from @SkyNews. It looks like they’re actually training with jet skis to ‘nudge’ inflatables, pushing them into French waters, then ‘alert the French’ the boats are in their territory. I don’t think I have seen a more idiotic plan, in all my years covering news. ~AA pic.twitter.com/sGJkKSowrf