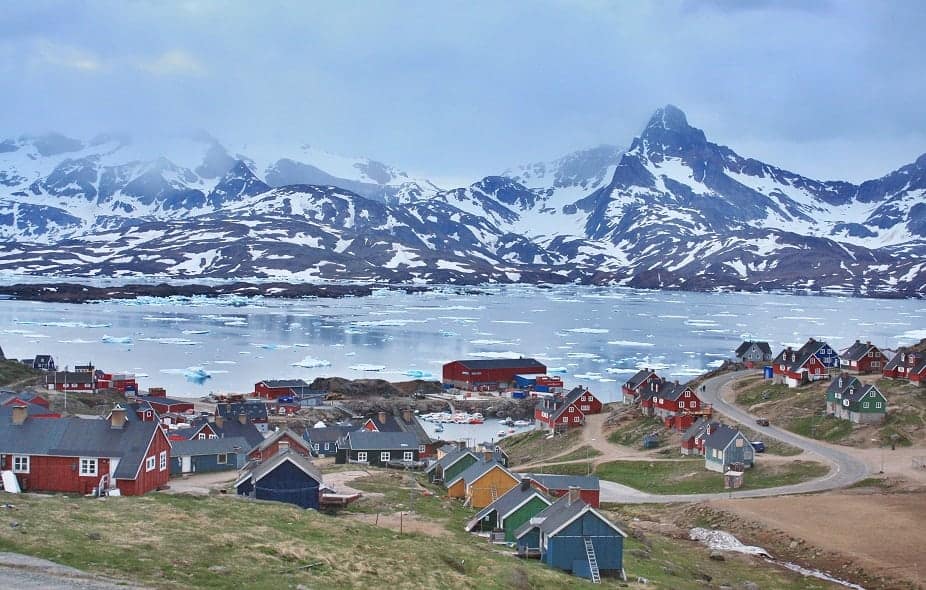 The study shows that traditional snowfall is being replaced by more wet and drizzly conditions – speeding up melting of the ice.

Some parts are even getting drenched in winter – a phenomenon that will spread as the climate continues to warm, scientists warn.

The shock finding sheds fresh light on how the Greenland ice sheet – the world’s second largest – is disappearing faster than previously feared.

It measures 660,000 square miles and is estimated to be losing about 270 billion tons of ice a year.

It is 10,000 feet thick at its centre and contains enough water to raise world sea levels TWENTY FEET. Only Antarctica’s contributes more to the swelling seas.

Most was thought to come from icebergs breaking off into the ocean from glaciers. But direct meltwater runoff has recently come to dominate.

This accounts for about 70 per cent of the shrinkage – and rain is the trigger, say the US team.

In the first study of its kind, co author Professor Marco Tedesco and colleagues hiked onto the ice sheet to study the physical and biological factors behind the intensive melting.

They found it is being driven by a range of factors – but the introduction of liquid water is among the most powerful.

Warm air, of course, can be directly responsible – but is not very efficient by itself, explained Prof Tedesco.

But this also produces cascading effects – including making a cloudburst fall as rain instead of snow.

This carries a great deal of heat. When it soaks into a snowy surface, it melts the snow around it – releasing more energy.

Meanwhile, the warm air that brought the rain often forms clouds, which hem in the heat.

This combination of events produces a pulse of melting that feeds on itself, and well outlasts the rain itself – often by several days.

Furthermore, the researchers found the length of these pulses has increased over the last four decades.

And they said the long term effects are set to be even worse. They believe part of the meltwater runs off, but the rest refreezes in place.

So when the sun comes out it melts quicker – producing more liquid water. This leads to even more melting – in a vicious circle.

Prof Tedesco, of Columbia University, New York, said this has caused more and earlier melting in the summer.

As the surface has been hardened into ice, it is easier for the water to flow off the sheet into the sea.

Prof Tedesco said: “If it rains in the winter, that preconditions the ice to be more vulnerable in the summer. We are starting to realise, you have to look at all the seasons.”

More than 300 events were identified in which rain was the initial cause, reports The Cryosphere.

Lead author Dr Marilena Oltmanns, of the GEOMAR Helmholtz Centre for Ocean Research in Germany, said: “That was a surprise to see.”

Over the study period, melting associated with rain and its subsequent effects doubled during summer – and tripled in winter, she said.

This was despite the total amount of rain and snow, known as precipitation, remaining the same.

Overall, her researchers estimate nearly a third of all the runoff they observed was initiated by rainfall.

It is hitting increasingly far-flung parts of the ice in summer. Winter rainfall so far appears mostly confined to lower elevations in south and southwest Greenland.

It is brought in by moist, relatively warm ocean winds from the south, which some communities in other areas call ‘neqqajaaq’.

These winds may be getting more common due to climate-induced shifts in the jet stream.

The elevation of the ice sheet increases further inland. So it is colder and snowier there.

Bu if average temperatures continue to increase as expected, the line where the moisture comes down as rain instead of snow will rapidly move inward, upward and northward.

Dr Oltmanns said: “The ice should be gaining mass in winter when it snows, but an increasing part of the mass gain from precipitation is lost by melt.”

Greenland is not the only place in the far north affected by increasing rain. In recent years, winter rains have hit the northern Canadian tundra, then refrozen over the surface.

This has sealed in plants that caribou and musk oxen normally forage through the loose snow, decimating herds.

And recent study near Fairbanks, Alaska, shows increasing spring rains are percolating down through the permafrost, thawing it and releasing large amounts of methane, a highly efficient greenhouse gas.

Between 1993 and 2014, global sea-level rise accelerated from about 2.2 millimeters a year to 3.3 millimeters – much of that believed due to melting in Greenland.

Projections of sea-level rise for the end of this century generally range from two to four feet.

But most do not account for what may happen to the ice in Greenland, nor with the much larger mass in Antarctica. Understanding the physics is still not advanced.

Prof Richard Alley, a leading glaciologist at Pennsylvania State University who was not involved in the study, said of the findings: “The big picture is clear and unchanged.

But, he added, the specific processes that will carry this “need to be quantified, understood and incorporated into models. This new paper does important work understanding and quantifying.”