Volcanoes on Mars grew a thousand times slower than those on Earth, according to new research. Scottish scientists have reconstructed the evolution of a volcano on Mars for the first time using space rocks that fell to Earth. Analysis of the meteorites from the Red Planet uncovered more than 90 million years of information about […] 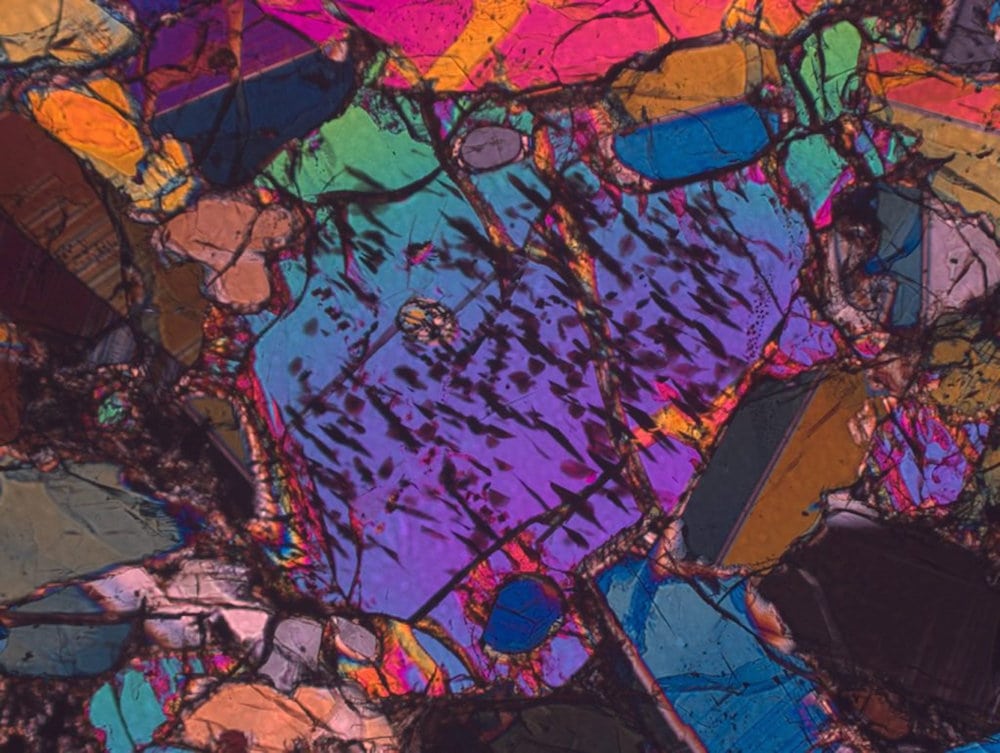 Volcanoes on Mars grew a thousand times slower than those on Earth, according to new research.

Scottish scientists have reconstructed the evolution of a volcano on Mars for the first time using space rocks that fell to Earth.

Analysis of the meteorites from the Red Planet uncovered more than 90 million years of information about the supersized mountains – and identified from which volcano they came from.

Martian volcanoes – including Olympus Mons which is over 13 miles high and more than 370 miles wide – are the largest in the solar system.

They are usually formed by mantle plumes similar to those on Hawaii, for instance.

But unlike on Earth, the crust on Mars does not move – allowing the volcanoes to erupt in the same place for extraordinary lengths of time.

This lack of tectonic plates means they can grow in size with each eruption, as new layers of lava settle and cool on the mountain’s sides.

On Earth, shifting plates will eventually cut off volcanoes access to their supply of molten rock, explaining why they never get so big.

The team of geologists used a scanning technique known as advanced mass spectrometry to uncover the origins of six meteorites known as ‘nakhlites’.

These are pieces of Martian terrain which were blasted from the face of the Red Planet by an asteroid hit 11 million years ago, then drifted through space before landing on Earth.

They are the second most common type of meteorites from mars.

Three were found in Antarctica, one in the USA, one in northwestern Africa, and one in Egypt.

The evolution of the volcanoes had been a mystery due to the difficulty of direct sampling.

By determining the age of the meteorites using radioisotopic dating techniques, the team reconstructed the growth of the Martian volcano at a rate of about 1ft 4in to 2ft 4in every million years.

The first detailed analysis of its kind found it erupted at least four times over a period of around 93 million years.

The finding published in Nature Communications shows the Martian volcano grew 1,000 times slower than similar volcanoes on Earth, such as Mauna Kea in Hawaii.

It also highlights significant differences between the Earth and Mars, suggesting the Red Planet was far more volcanically active earlier in its history than previously thought.

Lead author Dr Benjamin Cohen, of Scottish Universities Environmental Research Centre, East Kilbride, said: “We know from previous studies that the nakhlite meteorites are volcanic rocks, and the development of age-dating techniques in recent years made the nakhlites perfect candidates to help us learn more about volcanoes on Mars.”

First, the team reconfirmed how long the meteorites had spent in space before reaching Earth, by measuring their exposure to cosmogenic radiation.

Then the researchers used a technique known as argon-argon geochronology to learn more about the age of the Martian volcanic samples.

Using an instrument called a noble gas mass spectrometer, they could measure the amount of argon built-up from natural radioactive decay of potassium, allowing them to determine how much time has passed since the volcano erupted.

Dr Cohen added: “We found that the nakhlites formed from at least four eruptions over the course of 90 million years.

“This is a very long time for a volcano, and much longer than the duration of terrestrial volcanoes, which are typically only active for a few million years.

“And this is only scratching the surface of the volcano, as only a very small amount of rock would have been ejected by the impact crater – so the volcano must have been active for much longer.”

The team’s research has also helped them narrow down the possibilities of exactly which Martian volcano their samples came from.

“However, only one of these locations identified so far matches our results for the age of the eruptions and the timing of impact ejection into space.

“NASA has some wonderfully detailed satellite images of this crater.

“And we were able to see multiple horizontal bands on the crater walls – which indicating the rocks form layers, with each layer interpreted as a separate lava flow.

“This study has been able to provide a clearer picture into the history of the nakhlite meteorites, and in turn the largest volcanoes in the solar system.”

The research was funded by the Science and Technology Facilities Council (STFC) and the NASA Mars Fundamental Research programme.

It also involved scientists at the Universities of Glasgow and St Andrews, the Lawrence Livermore National Laboratory, California, and the Natural History Museum in London.