We will continue to need gas over the short to medium term – the question is where that gas comes from and fundamentally where we can store it in sufficient quantity to guarantee supply and stable prices says GMB GMB, the gas and energy workers union, has today written to the Minister for Energy and […] 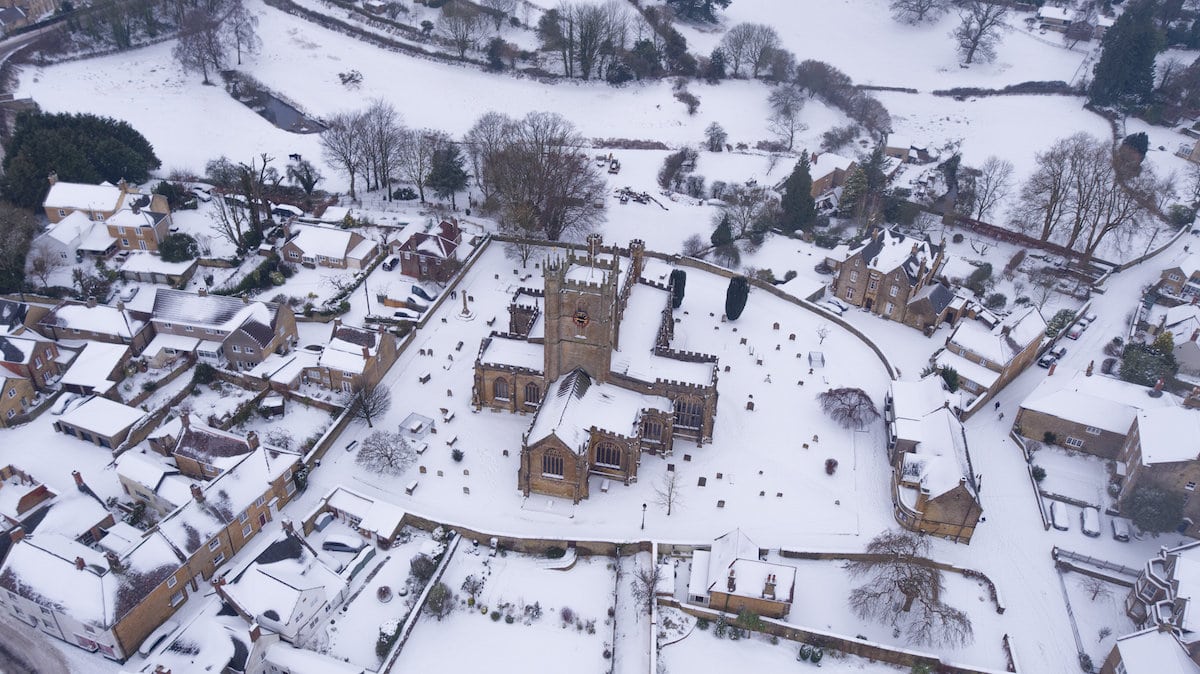 Aerial view of the scene at Crewkerne, Somerset which is covered in snow, March 2 2018. In nearby Ilminster several motorists were trapped in their cars on the A303 as blizzards blocked the road.

GMB, the gas and energy workers union, has today written to the Minister for Energy and Clean Growth Claire Perry calling for urgent meeting with trade unions and industry association to address the ‘Beast from the East’ gas crisis.

As Britain was battered by the coldest March weather on record, National Grid issued a stark warning the UK might not have enough gas to meet demand.

Gas heats 85% of UK homes and provides nearly half of our electricity – we need to make sure our supply is safe, secure, and in our own hands.

Stuart Fegan, GMB National Officer, wrote: “You will be aware of the media coverage yesterday surrounding the warning issued by National Grid regarding the UK’s demand for gas.

“I note with grave concern that not one representative from BEIS was put up for media comment, or to reassure the public and industry during this unprecedented weather, on what is being done by government to alleviate the problems in gas supply.

“GMB is shocked by the lack of leadership and professionalism shown by your department, particularly as the previous Minister, Richard Harrington, has already side-stepped these issues set out in our letter to him of 15th November 2017.

“GMB wrote specifically to you on 5th February 2018, along with major industry associations, setting out our very real concerns over gas and wider energy security, unprecedented prices hikes (particularly since the closure of the Rough Storage Facility last year) and how this has been affected by recent outages in supply.

“We are seeking a meeting with you with a view to assist government formulate a policy to address these urgent issues.

“As I am sure I shouldn’t need to remind you, gas heats 85% of UK homes and provides just under half our electricity needs. “It is also vital for tens of thousands of jobs, in ceramics, paper and steel (to name just a few industries).

“Gas is also fundamental to any meaningful fuel poverty strategy. There is no doubt that we will continue to need gas over the short to medium term, the question is where that gas comes from – and fundamentally where we can store it in sufficient quantities to guarantee supply and stable prices?

“We are already importing the majority of our gas into the UK and that is forecast to increase unless we consider alternatives such as shale gas extraction which, potentially, could make the UK energy sufficient for up to fifty years; if we just got on and accessed how much is there which can be viably extracted.

“Government must take a lead in this without further procrastination.

“While we transition to a world of increasing renewable usage in the UK, we must maintain a balanced and mixed energy policy in which reliable sources such as nuclear and gas are key.

“As the last few days have shown, we are seriously vulnerable in this regard and a long way from the energy self-sufficiency and reliance that would make common sense in the uncertainty of a post-Brexit world.

“Whilst the BEIS workshop we have been invited to is of course important, I call on you to meet with GMB, our colleague trade unions, and industry associations as a matter of urgency to address these very real concerns that will affect the future welfare of the citizens of this country along with hundreds of thousands of jobs and our wider prosperity.”