The US has warned that a Russian invasion of Ukraine could come "at any time". 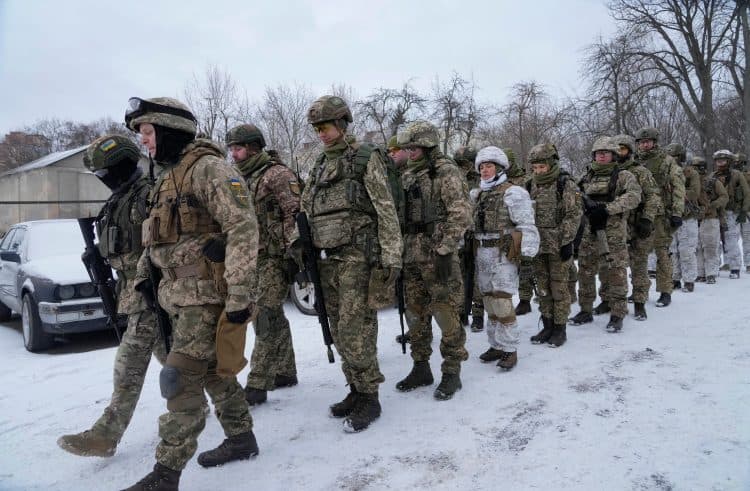 The UK has begun to withdraw staff from the British embassy in Ukraine amid fears Russia is preparing an invasion.

Officials say there have been no specific threat to British diplomats, but around half of the staff working in Kyiv will return to the UK nonetheless.

The US is taking a similar approach, warning a Russian invasion could come “at any time” – but EU staff will remain in place.

Although Moscow has denied plans for military action, tens of thousands of troops are stationed on the border with Ukraine.

The Foreign Office said: “Some embassy staff and dependants are being withdrawn from Kyiv in response to the growing threat from Russia.

“The British Embassy remains open and will continue to carry out essential work.”

The UK believes there is a significant risk that Russian president Vladimir Putin will launch a full-scale invasion of Ukraine.

Foreign Secretary Liz Truss has accused the president of plotting to install a pro-Moscow leader as head of the Ukrainian government.

The Foreign Office took the unusual step of naming former Ukrainian MP Yevhen Murayev as a potential Kremlin candidate to take over in Kyiv – a claim dismissed as provocative “nonsense” by Moscow.

Deputy Prime Minister Dominic Raab warned on Sunday there was a “very significant risk” of a Russian invasion of its neighbour.

“The world needs to keep its eye on this and be very clear with President Putin that it would not do this cost-free, that there would be a price,” he told the BBC.

“A price in terms of the strenuous defence that we would expect the Ukrainians to put up, but also the economic cost through sanctions, which are of course more effective if the international community speaks as one or at least with a broad consensus.”

There are concerns that the crisis could trigger a spike in European energy prices, with The Times reporting that officials fear Russia could restrict supplies of gas in response to sanctions.

Senior government officials fear Russia will “weaponise” its natural resources if the West carries out a threat to impose sanctions.

Ministers have been discussing what impact a reduced supply of gas from Russia would have on prices in Britain, with any disruption likely to push prices to new record levels.

“Unlike some countries the UK hardly imports any Russian gas,” one official said. “But like all countries we are exposed to rising wholesale prices, which would be a significant issue if Russia further restricted supply.”