The UK was battered with almost a month’s worth of rain in a day on Sunday, with homes, roads and Tube stations flooded in the south of England. 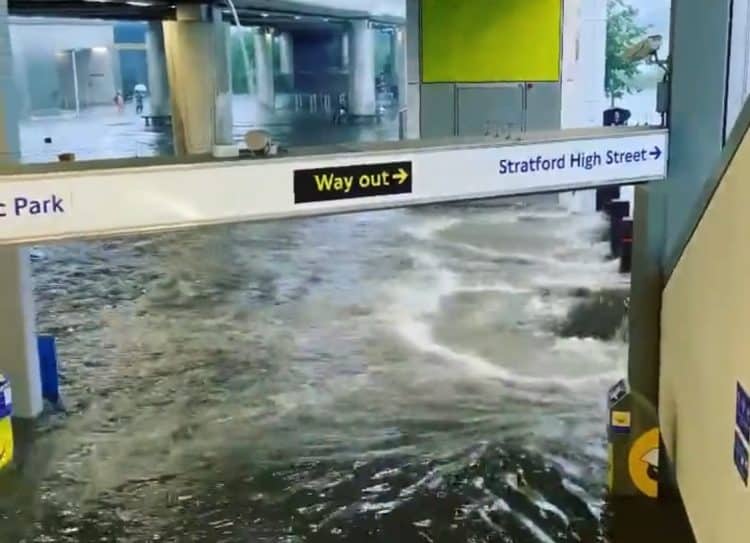 Heavy rain and flash flooding “on our own doorstep” in recent days is a reminder for the UK about the urgent need to tackle climate change, the head of the Cop26 summit has said.

But Alok Sharma, speaking at a press conference, expressed disappointment at a lack of progress made during a two-day meeting with ministers from more than 50 nations on the prospect of ditching coal as an energy source.

The UK is pushing for an agreement at the Glasgow climate conference to limit global warming to 1.5C, but Mr Sharma – appointed by the Prime Minister to lead the negotiations in November – said the target would be “extremely difficult” to achieve without all the countries in the G20 signing up to a pledge to phase out coal.

Addressing reporters on Monday, the former business secretary said rain and flooding “sweeping London” while ministers were engaged in talks had sharpened their focus.

He added: “I think it is a sober reminder on our own doorstep of the urgency of our task.”

The UK was battered with almost a month’s worth of rain in a day on Sunday, with homes, roads and Tube stations flooded in the south of England, while a flooded hospital had to cancel all surgery and outpatient appointments on Monday due to water getting into its basement and affecting its power supply.

Mr Sharma used the unseasonal weather to push home the message for countries to switch their domestic power-producing methods.

He said there remained “significant differences” on some issues and it was “very disappointing” not to come to an agreement on coal.

“We weren’t able to get every country in the G20 to agree to language on unabated coal phase-out,” said Mr Sharma.

The conference president said he “completely accepted” that “different countries start from different positions in terms of their energy mix” but pointed to the UK’s own shift towards renewable energy.

“We’ve managed to grow the biggest offshore wind sector in the world and that’s because we have put in place the right market mechanisms to allow the private sector to invest as well.

“It is certainly the case that unless we are going to get all countries signed up to unabated coal phase-out, then keeping 1.5C within reach will be extremely difficult.”

With the Covid-delayed Glasgow gathering less than 100 days away, Mr Sharma stressed that “every day counts” and argued it was “incumbent on every country to give their all to this process”.

“Ultimately, there is not going to be anywhere to hide at Cop26, each of us will be in the spotlight and we will only deliver this by working together,” he said.

In a statement after the meeting, John Kerry, US special presidential envoy for climate, said: “This is the decisive decade to confront the climate crisis and get on track to achieve the net zero global economy that the world needs.

“The major economies in particular have a leadership role to play in submitting by Glasgow ambitious 2030 targets and clear strategies for how we are all going to get to net zero emissions by 2050.

“We must make Cop26 a pivotal moment for the world to come together to meet and master the climate challenge.”