"No wonder the Aussie trade minister was so fulsome in his praise for Liz Truss. The Aussies can't believe their luck in negotiating the fastest trade deal in history," one person said. 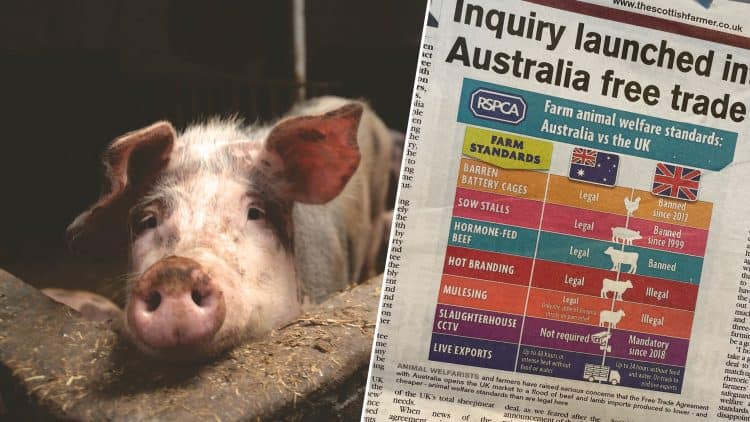 The UK government’s new Free Trade Agreement with Australia has been heavily criticised amid calls for an inquiry to look into the impact it will have on farmers.

According to animal welfare charity RSPCA, barren battery cages, sow stalls, hormone-fed beef, hot branding and mulesing are all legal in Australia, but banned or illegal in the UK.

A table put together by the charity reveals slaughterhouse CCTV is not required in Australia, but has been mandatory in the UK since 2018.

Meanwhile, Australia allows live exports to stay in intense heat without food or water for up to 48 hours, whilst Britain’s limit is 24 hours and has been on track to end live exports.

Reactions poured in as critics see the new deal as threatening the UK’s farming values and food standards.

British economist Ann Pettifor said: “No wonder the Aussie trade minister was so fulsome in his praise for Liz Truss on the BBC Radio 4 News at One today… The Aussies can’t believe their luck in negotiating the fastest trade deal in history…”

And Food journalist Josh Barrie said: “Yes, abhorrent farming standards. Largely similar in the US. F*** them all off. “

British businesswoman Deborah Meaden added: “As we all said….haven’t been wrong on any of my predictions on Brexit…not because I am a clever clogs…but because it was blinkin obvious…”

Other Twitter users also chipped in, with Russell England highlighting hormone-fed beef is banned in the EU and Pietro Cosenza saying the new deal is not showing neither Australia nor the UK in a good light.

“One weird side-effect of Brexit – realising just how low standards are beyond the EU,” Josef O’Shea said.

The UK’s deal with Australia, announced by prime ministers Boris Johnson and Scott Morrison in June, was finalised at a virtual signing ceremony this month.

But the agreement, the first to be negotiated from scratch since Brexit, is expected to add little to economic growth in the long run while critics have warned about the impact on British farmers and questioned its commitments on tackling climate change.

Frances O’Grady, general secretary of the Trades Union Congress, said the deal “poses a threat to working people while contributing almost nothing to our economy” because there was “no effective means to enforce fundamental labour rights” or protect migrant workers from exploitation.

Related: New 2022 roaming fees kick in next month for UK travellers to the EU