Justin Trudeau’s response to a wet World War I service went viral this weekend after Donald Trump pulled out of a trip to a cemetery in France due to the inclement weather. The Canadian Prime Minister spoke at a service to mark the 75th anniversary of the raid on Dieppe in France, in August last year. During the […] 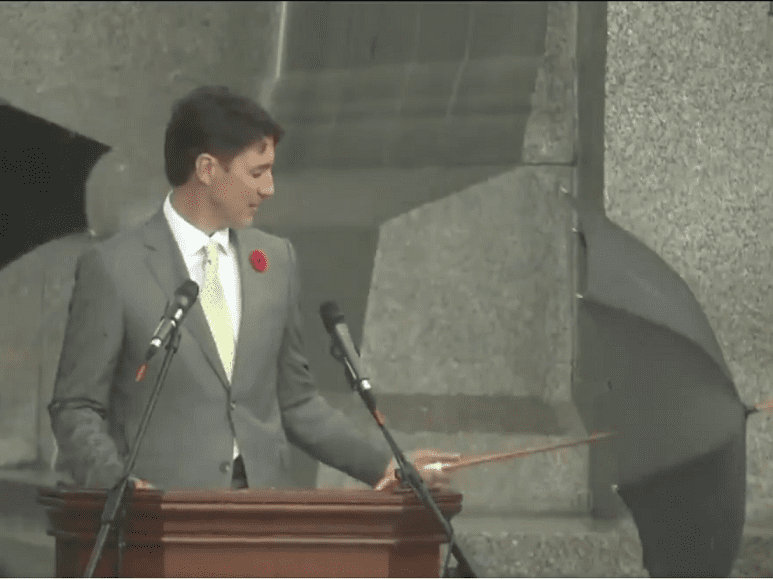 Justin Trudeau’s response to a wet World War I service went viral this weekend after Donald Trump pulled out of a trip to a cemetery in France due to the inclement weather.

The Canadian Prime Minister spoke at a service to mark the 75th anniversary of the raid on Dieppe in France, in August last year.

During the speech, which was beset by torrential rain, Trudeau shunned an umbrella as he spoke, saying: “As we sit here in the rain, thinking how uncomfortable we must be these minutes as our suits get wet and our hair gets wet and our shoes get wet, I think it’s all the more fitting that we remember on that day, in Dieppe, the rain wasn’t rain — it was bullets.”

The video has resurfaced after Trump cancelled a visit to a US military cemetery in France due to the bad weather.

This is the video of the event. pic.twitter.com/ZHbDPEDbWW

Defence Minister Tobias Ellwood responded to Trump’s snub on Twitter saying, “rain did not prevent our brave heroes from doing their job”.

Photos of his predecessor Barack Obama campaigning or speaking at various events in the rain also emerged.

A number of them featured the former president in pelting rain honouring veterans or those killed in battle.

This is a real leader @realDonaldTrump. The rain…seriously? You have no idea what we go through in war and that’s why us Vets should hold a special place in society. Thank you @BarackObama for being a pure class act! #Resist pic.twitter.com/M6uWy7m06c