“It is a tacit – explicit really – admission of failure. Of a gross, a dismal failure of geostrategy and of statecraft," said Lord Richards, a former chief of defence staff. 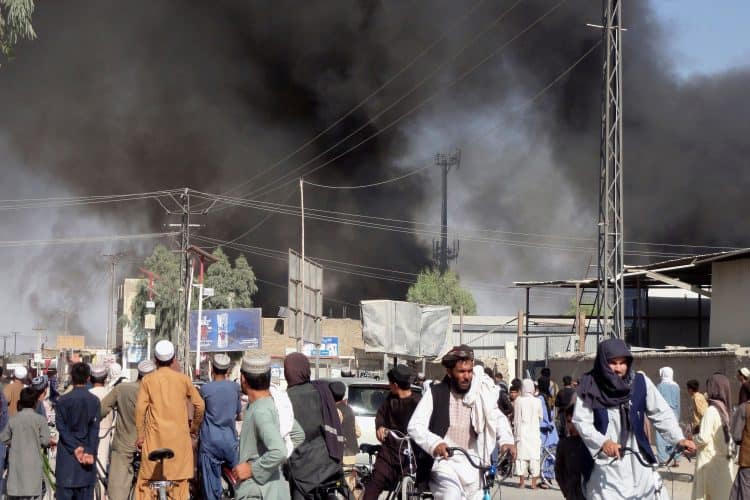 The Taliban have captured Afghanistan’s second largest city, Kandahar, in what is a crushing blow for the government and a major win for the militants.

The southern city was once the Taliban’s stronghold, and is strategically important as a trade hub.

The insurgents also seized the nearby city of Lashkar Gah and now control about a third of Afghanistan’s provincial capitals.

In response, the US and UK have sent troops to get as many of their citizens home before the capital Kabul is attacked, and could also fall.

Sending troops into Afghanistan “to keep the door open as you leave is a sure sign of failure”, the chairman of the Foreign Affairs Select Committee, Conservative Tom Tugendhat MP, has said.

Both the UK and the United States said on Thursday that they would deploy troops to Afghanistan to support their diplomatic presence, help their citizens leaving the country and support the relocation of former Afghan staff, as the Taliban continue to make gains.

The UK said it would deploy 600 troops on a short-term basis, while the US has vowed to send 3,000 of its own to Afghanistan.

In response to the ongoing crisis former International Development Secretary, Rory Stewart slams US and UK decision to withdraw troops from Afghanistan after the Taliban makes “terrifying” advances on much of the country’s key cities.

Former International Development Secretary, Rory Stewart slams US and UK decision to withdraw troops from Afghanistan after the Taliban makes “terrifying” advances on much of the country’s key cities.https://t.co/qFYRLv6YQw pic.twitter.com/O6Ic9f5xP0

On BBC Breakfast this morning Secretary of State for Defence Ben Wallace MP says he’s concerned the Taliban is creating conditions where terrorists could thrive, “obviously the Taliban will grow this type of environment” he said.

“Obviously the Taliban will grow this type of environment”

“The political will to see through enduring support to Afghanistan has not been there & a lot of people are going to die because of that,” he said.

“It is disgraceful and pretty humiliating for this country.” @JohnnyMercerUK‘s damning assessment of the situation in #Afghanistan RC#KayBurley pic.twitter.com/g5Hwr8m0fO

“The political will to see through enduring support to Afghanistan has not been there & a lot of people are going to die because of that”⁰
Conservative MP Johnny Mercer, who served in Afghanistan, says it’s ‘deeply humiliating’ to see the Taliban advance.https://t.co/z6HXtrdmft pic.twitter.com/cHB7GYVEMx

Retweeting news of the American deployment Tugendhat MP, said: “A hasty exit is not a sign of success. Needing reinforcements to keep the door open as you leave is a sure sign of failure.”

Mr Tugendhat, who has been vocal critic of the troop withdrawal, spoke of his own time serving with the armed forces in Afghanistan, and said “the decision to withdraw is like a rug pulled from under the feet of our partners”.

And the chairman on the Defence Select Committee, Conservative Tobias Ellwood MP, said on Twitter: “What would Churchill say? This is NOT our finest hour. What happened to GLOBAL BRITAIN and AMERICA IS BACK?

“The largest high tech military alliance ever – defeated by an insurgency armed with mines, RPGs and AK47s. We can and must do better.”

Speaking of the UK troop deployment and efforts to aid British citizens and others leaving the country, Lord Richards, a former chief of defence staff, told BBC’s Newsnight: “I think they will be doing what we call a non-combatant evacuation operation. They will hold the ring for as long as they can and then get out along with the people they have helped.”

He added: “It is a tacit – explicit really – admission of failure. Of a gross, a dismal failure of geostrategy and of statecraft.

As the news of the fall of the Afghan govt sends shockwaves throughout the world, Vietnam began to trend on Twitter, with people comparing this crisis with the US withdrawal of the youth Asian country after years of fighting, which many saw as a defeat for American forces.

U.S. lost prestige in Vietnam but consequences of Afghanistan’s loss are far greater: Revival of global Jihadism. Message to allies that they cannot rely on U.S. Encouragement to medium sized powers that they can outmaneuver superpower by mixing defiance with friendly pretenses.

Remember this in Vietnam?
US surrender in Afghanistan to the Taliban terrorists today is much worse than this iconic image of embarrassment. pic.twitter.com/FObZJiHHHP

This is turning into something worse than Vietnam pic.twitter.com/EtqaItxxfr

This would suggest at least one lesson might have been absorbed from the Vietnam experience. https://t.co/KgpvQlDaxW

The countdown to our Fall of Saigon moment in #Afghanistan has begun.

And just like #Vietnam, we’ll leave behind thousands who put their fate in our hands.

They’ll now be slaughtered by the #Taliban.

Related: Biden: ‘It is time for American troops to come home’ from Afghanistan

What is going on? Nurses ‘banned from drinking water’ and train drivers using incontinence products