Lib Dem MP Layla Moran, outside the chamber, said: “It is utter hypocrisy that the public are rightfully being advised to wear masks while Conservative MPs refuse to do so.” 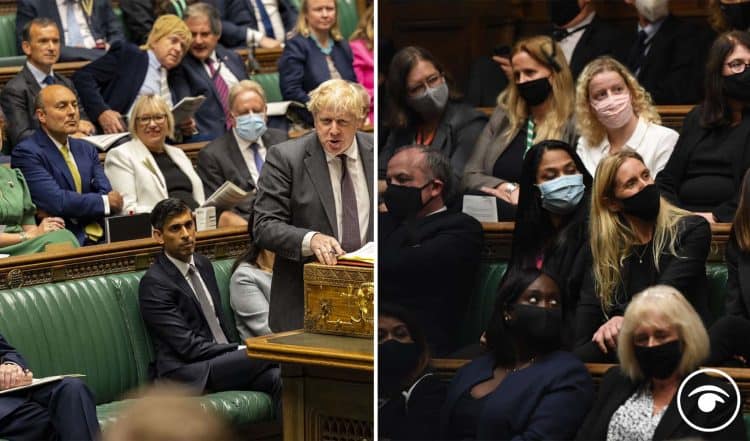 Ministers have been warned their face covering “obsession” risks jeopardising the Covid-19 vaccine rollout, amid concerns the booster programme will not be finished until March 2022.

Conservative former minister Dr Andrew Murrison voiced concerns that a focus on non-pharmaceutical interventions could “obscure” the key message on getting people to have their jabs.

Tory colleague Sir Desmond Swayne also bemoaned the impact of mask-wearing on mental health, with vaccines minister Maggie Throup also noting the current guidance is for people to make their own decision on whether to wear one or not.

On Wednesday, Health Secretary Sajid Javid urged people to wear masks in crowded spaces and said fellow MPs have a “role to play to set an example”.

Few MPs on the Conservative benches have worn masks in recent weeks, even when the chamber is busy, although noticeably more of them had put one on during Thursday’s session despite the chamber not being packed.

Deputy chief whip Stuart Andrew, health minister Gillian Keegan and trade minister Penny Mordaunt were among the Conservative frontbenchers to wear one on Thursday, although Commons Leader Jacob Rees-Mogg went without one.

Liberal Democrat MP Layla Moran, outside the chamber, said: “It is utter hypocrisy that the public are rightfully being advised to wear masks while Conservative MPs refuse to do so.”

Speaking during an urgent question on Covid-19, Dr Murrison told the Commons: “Will the minister ensure an obsession with non-pharmaceutical interventions, such as mask wearing, does not obscure the central message, which is that the way out of this is through the continuation of the UK’s excellent vaccination programme?”

Ms Throup said the vaccination programme is the “best wall of defence” for the UK.

Former minister Sir Desmond added: “When we’re increasingly concerned about mental health, the mask that she was wearing only moments ago deny us the fellowship and reassurance of her friendly facial expression. But the material of which it is composed has gaps that are 5,000 times bigger than the virus, aren’t they?”

Ms Throup replied: “I look forward to the time we don’t need to wear face coverings because I love to see everyone’s smiling faces, but we do need to make sure that we all get jabbed so we can get to that stage.”

The minister, in response to a question asking for all Conservative MPs to wear masks, said: “Plan A outlines the guidance that we have in place and that’s the guidance that people should be following, and it’s up to individuals to work out what works for them and what’s best for them. Plan B incorporates mandatory wearing of masks but we’re on plan A.”

For Labour, shadow health secretary Jonathan Ashworth earlier highlighted pressures on the NHS before adding: “Isn’t the truth that we are in this situation because the vaccination programme is now stalling? Ministers cannot blame the public when two million haven’t even been invited for a booster jab and on current trends we won’t complete the booster programme until March 2022.”

Mr Ashworth said: “With infections running so high, ministers need to, if I may, stop vacillating and get vaccinating.”

Ms Throup said: “Plan A is still what we are working to. Our vaccines have created a wall of defence. It is incredible how many people have taken up the offer of not just the first jab but the second jab, and are now coming forward for their boosters.”

She also gave advice to people who need to get both a Covid booster and a flu jab, saying: “If you get your call for your flu jab, don’t wait for your call to get your booster jab and vice versa, get whichever jab you get invited for first and that will help to protect you and your family and the people around you.”

Conservative former health secretary Jeremy Hunt suggested the Government should look at potentially reducing the time to get a booster from six to five months after the second jab.

“If you look at the higher hospitalisations, cases and death rates, compared to countries like France and Germany, the heart of it is not actually things like mask wearing and Covid passports, it is their higher vaccine immunity.”