"Let's have some respect for someone who works on the frontline of this, Andrew Bridgen", Susanna Reid fired back. 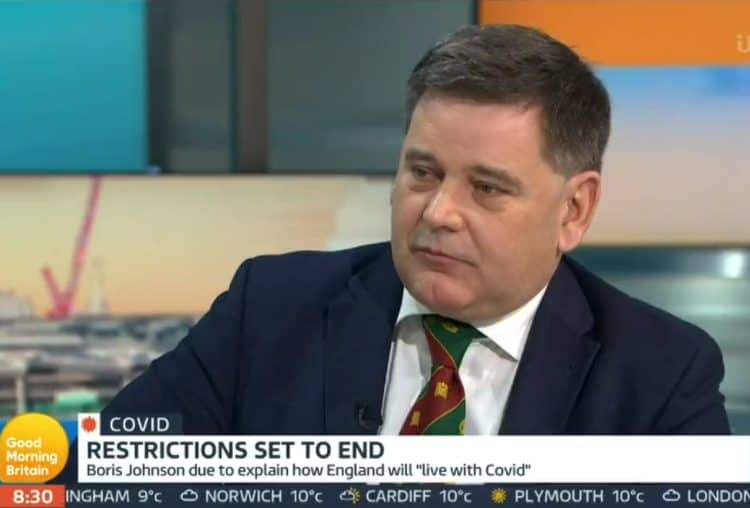 Andrew Bridgen has been accused of “barefaced contempt” of NHS workers following a live GMB appearance this morning.

The Conservative MP praised Boris Johnson’s ‘living with Covid’ plans, which includes the end of the legal obligation to isolate after a positive test.

Bridgen said there is “never a bad time to do the right thing” and the PM “has done the right thing with regard to the Covid restrictions”, but confirmed he would not be withdrawing his letter of no-confidence.

He also snubbed a nurse from Wiltshire who had argued the government’s plans were “worse than reckless”.

When her line froze he said, “thank goodness”, provoking an angry response from Susanna Reid.

Earlier this month it was revealed that Bridgen is being investigated by Parliament’s standards watchdog over claims of paid lobbying and failing to properly declare interests.

The investigation into the backbencher comes after a report in The Times alleged he lobbied Government minister Andrew Stephenson to help with Mere Plantations’ tax affairs.

The timber firm donated £5,000 to the North West Leicestershire MP’s local Tory association following a call to the then-Foreign Office minister in August 2019.

Mr Bridgen accepted a £3,300 trip to Ghana paid for by the company that month and is listed as an unpaid adviser for it on business and international politics.

He welcomed the opportunity to “clarify” the situation with Parliamentary Commissioner for Standards Kathryn Stone, and said he has “never received any money” from the firm.

Ms Stone is investigating a possible breach of the section of the MPs’ code of conduct stating “no member shall act as a paid advocate”.

And she is looking at the part stating they should always be “open and frank” in drawing attention to any relevant financial interest in any proceeding of the House or communications with ministers.

The register of MPs’ interests shows Mr Bridgen received the £3,300 trip to Ghana in August 2019, which was listed as a “learning trip on potential climate change mitigation” and as being for “asset inspection”.

He confirmed the call took place with Mr Stephenson that month, but said it was about the “function of the business attache in support of UK businesses” in Accra.

The register of interests also shows the £5,000 donation to the North West Leicestershire Conservative Association from Mere, which Electoral Commission records show was accepted in November 2019.

Mr Bridgen is also listed as being an unpaid adviser to the firm since May 2020.

He told the PA news agency: “I’m delighted to be able to clarify these matters with the standards commissioner and I will reiterate I have never received any money from Mere Plantations or anyone associated with them.”

A Mere Plantations spokesman said there was “nothing inappropriate”, adding: “We haven’t paid Andrew Bridgen anything.”

Related: There should be a ‘high bar’ to oust a sitting PM, minister claims