The founder of the English Defence League has been jailed over comments made on camera outside a court building which had the potential to derail a long-running trial. Tommy Robinson filmed himself during an hour-long rant outside Leeds Crown Court which he streamed on Facebook Live and was viewed a quarter of a million times. […] 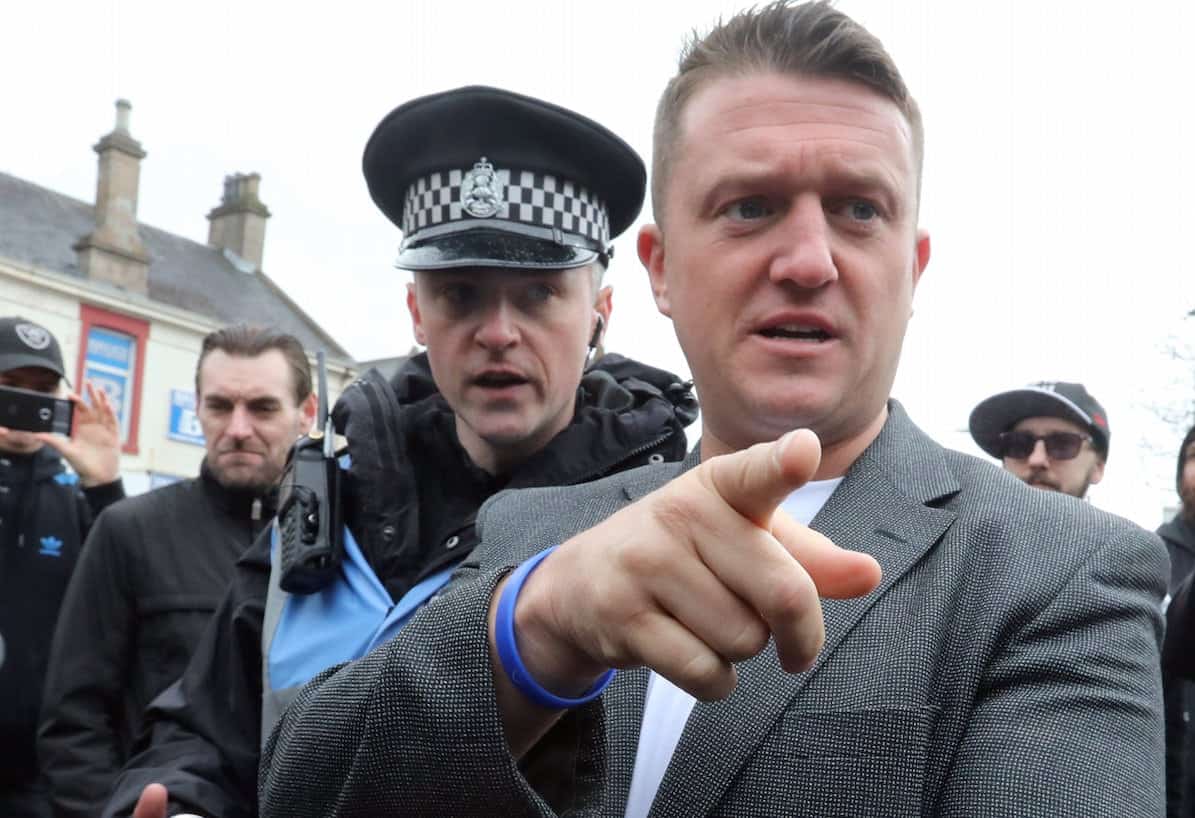 The founder of the English Defence League has been jailed over comments made on camera outside a court building which had the potential to derail a long-running trial.

Tommy Robinson filmed himself during an hour-long rant outside Leeds Crown Court which he streamed on Facebook Live and was viewed a quarter of a million times.

A judge who locked the right-wing activist up for 13 months for contempt of court told him his actions may cause the sensitive case to be abandoned.

The court heard it could cost taxpayers “hundreds and hundreds of thousands of pounds” if a re-trial has to be held.

A strict order is currently in place temporarily banning publication or broadcasting details of the long-running case or anyone involved.

Details of the case will be allowed to be revealed later this year.

Robinson was arrested after naming defendants in the case, the charges they face and details of the allegations.

He also filmed defendants and confronted them as they were entering the building on Oxford Row.

The 35-year-old was held in the court cells before being taken into the court to face trial judge Geroffrey Marson, QC.

The judge explained why Robinson’s actions had been in contempt of court.

He said the order had been made to ensure the “integrity” of the case.

The judge said: “Nothing may occur which will prejudice the trial.

He added “He was expressing his views. Everyone understands the right to freedom of speech but there are responsibilities and obligations.”

The video footage was played to the judge in court before he dealt with Robinson.

“He was making a video. He was referring to this case.

“He referred to the charges that the defendants faced and some charges which are not proceeded against in relation to some defendants.”

The court heard the footage had received 250,000 views and a story about Robinson’s arrest was the lead article on a national newspaper website.

Judge Marson said: “Not only was it a very long video but I regard it as a serious aggravating feature that he was encouraging others to share it and it had been shared widely.

“That is the nature of the contempt.”

The lawyer representing Robinson said the right-wing activist will be in danger of being killed or seriously assaulted by other inmates while in custody.

Robinson – who pleaded guilty to the contempt of court charge – appeared before the court under his real name, Stephen Christopher Yaxley-Lennon.

He said: “I have to be realistic in relation to the submission that what he did was provocative in challenging individuals.

Mr Harding said Robinson was aware of the reporting restriction in place in the case but thought what he was saying on camera was already in the public domain.

The barrister added: “He was mindful, having spoken to others and taken advice, not to say things that he thought would actually prejudice these proceedings.

“He did not try to cause difficulties for the court process.”

Mr Harding said Robinson had served time in prison before and had been the victim of assaults in custody.

He said there had been “a price on his head” during his last prison term and inmates had been offered the reward of drugs and mobile phones to kill him.

At the time of the incident, which happened last Friday, jurors were in the process of considering verdicts after hearing six weeks’ of evidence.

Judge Marson told Robinson that only an immediate jail term could be imposed as his actions had been so serious.

Jailing him, the judge added: “People have to understand that if they breach court orders there will be very real consequences.”

Robinson has a previous conviction for contempt of court.

He was the subject of a suspended prison sentence, imposed at Canterbury Crown Court, for committing a similar offence by filming inside a court.

Robinson has a criminal record dating back to 2005, when he was convicted of assault occasioning actual bodily harm.

He also has convictions for possessing drugs, threatening behavior, disobeying a court order, possessing identity documents with intent and fraud.

Robinson, a married father-of-three, founded the English Defence League in Luton in 2009 before resigning in 2013.

The organisation was responsible for violent marches on the streets where members clashed with police and counter-demonstrators.

Correction: an address published in a previous version of this article was an incorrect address given to the press and has no connection to Tommy Robinson (real name: Stephen Christopher Yaxley-Lennon )