The latest arrivals come soon after a 27-year-old Eritrean man lost his life trying to reach the UK. 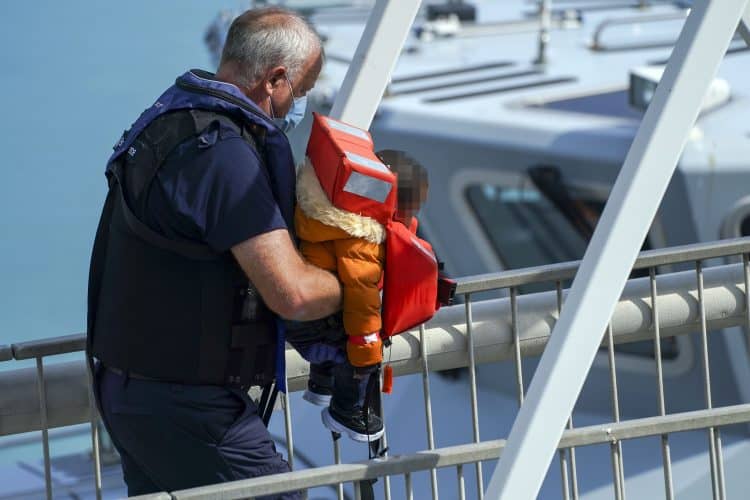 EDITORS NOTE Children's faces have been pixelated as the PA Picture Desk has been unable to gain the necessary permission to photograph a child under 16 on issues involving their welfare. A young child is carried ashore as a group of people thought to be migrants are brought in to Dover, Kent, by Border Force officers, following a small boat incident in the Channel. Picture date: Sunday August 15, 2021.

Children too young to walk were among people seen arriving in Dover on Sunday after making the dangerous journey across the English Channel.

Toddlers were carried ashore in the arms of officials after being brought into the port aboard a Border Force patrol boat.

Adults wrapped in blankets and lifejackets also arrived in Dover.

One man wearing a black hoodie and baseball cap beneath his lifejacket gave a thumbs up as he was brought into the Kent port.

A number of boats are believed to have succeeded in crossing to the UK on Sunday, with about 50 people seen arriving in Dover.

The English Channel is one of the world’s busiest shipping lanes and the waters have claimed several lives.

The Home Office has repeatedly vowed to make the Channel route “unviable” but numbers have risen sharply over the past two years.

Since the start of last year, nearly 20,000 people have risked death crossing to the UK aboard dinghies, kayaks and other small boats.

Nearly 600 people made the perilous trip across the English Channel on a single day last week, a new daily record.

On the day an Eritrean man tragically lost his life trying to reach the UK, at least 592 people succeeded in making the dangerous crossing, latest figures show.

The 27-year-old died after he and four others jumped overboard as their boat started to sink in the Dover Strait on Thursday.

His 22-year-old girlfriend watched as he entered the water before she was later rescued, a French migrant help association told the PA news agency.

After being returned to port in Dunkirk, she later discovered that her boyfriend had tragically died after being taken to hospital. A manslaughter investigation is now under way in France following the death.

Latest figures provided by the Home Office on Friday night say at least 592 people were rescued or intercepted in their bids to cross to Britain on Thursday – a new record for a single day.