Demonstrators wore masks and gloves, while hand sanitiser was available at some events across the country. 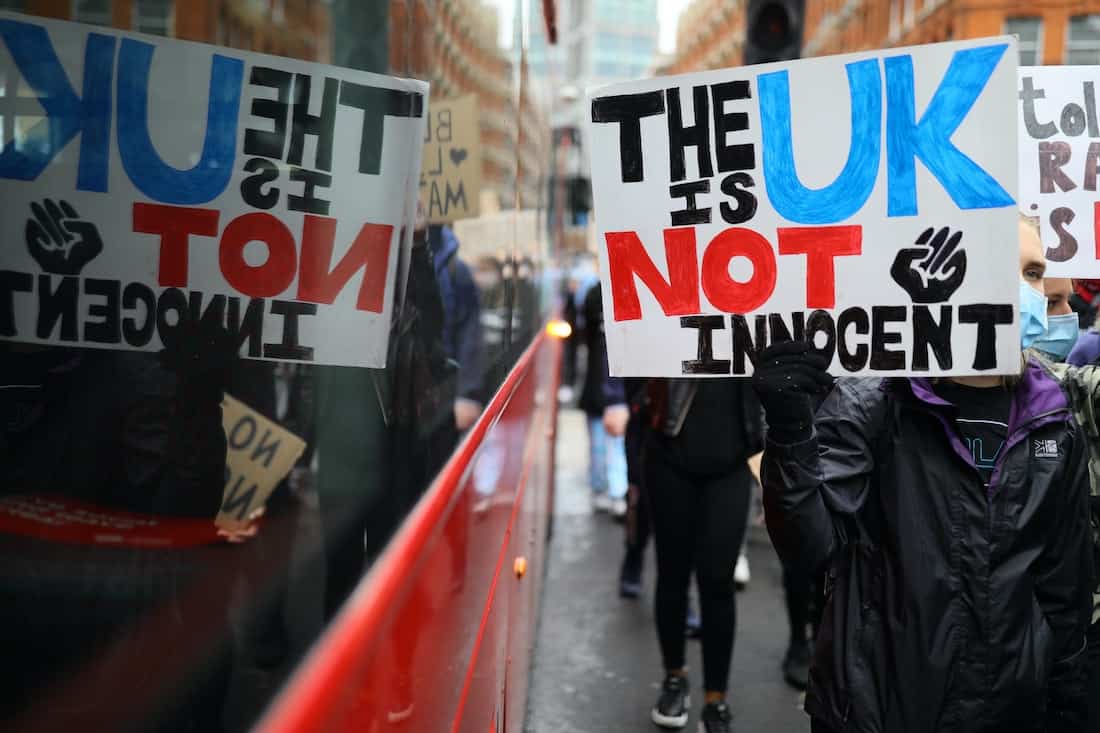 Thousands of people ignored Health Secretary Matt Hancock’s plea not to gather during lockdown as they joined Black Lives Matter protests across the country.

Boxing heavyweight champion Anthony Joshua used crutches to join people on a peaceful protest in his home town of Watford.

Many people wore masks and social distancing measures were encouraged during events in London, Manchester, Cardiff, Sheffield and Newcastle, among other cities.

But people wanted to show solidarity with those in the US campaigning against police brutality following the death of George Floyd in Minneapolis.

They also highlighted incidents when black and ethnic minority people in Britain have been victims of racial discrimination and violence at the hands of police and others.

In a speech shared online, 30-year-old Joshua told people in Watford: “We can no longer sit back and remain silent on this senseless, unlawful killings and sly racism on another human being – based on what? Only their skin colour.

“We need to speak out in peaceful demonstrations – just like today, so well done Watford.

“We must not use a demonstration for selfish motives and turn it into rioting and looting.”

In London, most demonstrators who gathered in Parliament Square wore masks and face coverings, with some opting for gloves.

Placards carried by demonstrators referenced the coronavirus crisis, with one saying: “There is a virus greater than Covid-19 and it’s called racism.”

As the rally began, one organiser used a megaphone to tell the crowds: “We are not here for violence.

Protester Bobbi, 26, from Chingford, London, who did not give her last name, said: “We’re literally living in the history books, we’re going to be teaching our future children about this and I want to say I was here to support that.”

Thousands of protesters packed central Manchester. They chanted and clapped in unison and held home-made placards bearing the initials BLM.

Several hundred marchers gathered in Newcastle, while thousands more watched an online protest organised in the north-east of England.

Demonstrators gathering at the Earl Grey Monument in the city centre were handed masks if they did not have one, while hand sanitiser was available.

Dr Christina Mobley, a lecturer who came to Newcastle University from the University of Virginia in Charlottesville, attended with her five-year-old daughter.

Need to be here today

The historian, who is leading the project to decolonise the university curriculum, said: “I absolutely felt the need to be here today. The organisers have done an amazing job.

“It is really powerful to see such a young, motivated crowd coming out and organising themselves, handing out masks and working with the police.”

She took a photo of one of the police officers who had taken off his helmet during the silence for Mr Floyd.

Meanwhile, an online protest organised by Stand Up To Racism – North East drew an audience of several thousand, who listened to speakers including Janet Alder, whose brother Christopher died in police custody in Hull in 1998.

In Sheffield, hundreds of people gathered on Devonshire Green to protest and hold a minute’s silence.

During the gathering, which included speeches, they chanted: “No justice, no peace, no racist police.”