"This is what the future looks like, arriving," one person tweeted. 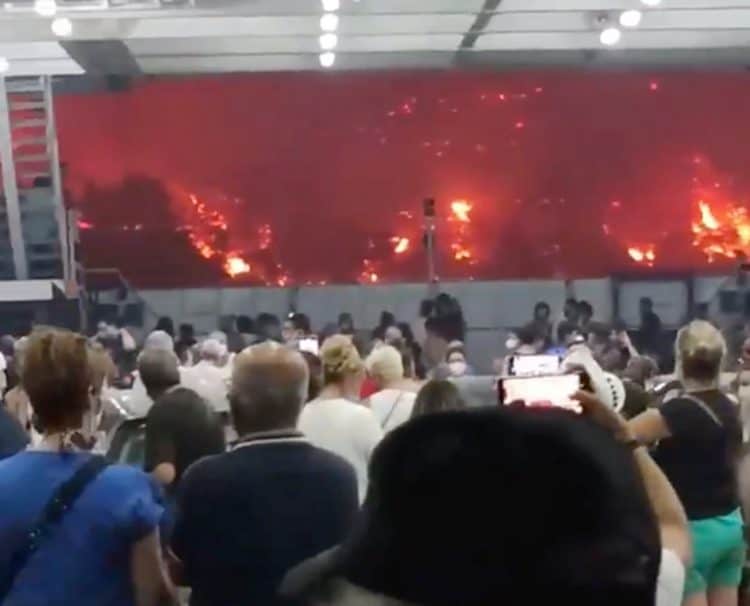 Wildfires rampaged through massive swathes of Greece’s last remaining forests for yet another day, encroaching on more inhabited areas after burning scores of homes, businesses and farms.

In neighbouring Turkey, fires described as the worst in decades have swept through stretches of the country’s southern coast for the past 10 days, killing eight people.

A fire threatening the Greek capital’s most important national park killed one volunteer firefighter, while at least 20 people have been injured in blazes during the country’s worst heat wave in 30 years.

Thousands of residents and vacationers have fled approaching flames by land and by sea.

In apocalyptic scenes overnight and into Saturday, ferries evacuated 1,153 people from a seaside village and beaches on Evia, an island of rugged, forested mountains popular with holidaymakers and campers, after flames from a massive wildfire burning for days cut off all other means of escape.

People clutched babies and carried older adults on chairs as they boarded the small ferries to safety.

Another major blaze was burning in the southern Peloponnese region of Mani, where the deputy mayor of East Mani, Eleni Drakoulakou, told state broadcaster ERT that 70 per cent of her area had been destroyed.

The multiple fierce fires have stretched Greece’s firefighting forces have been stretched to the limit.

The government appealed for help through the European Union’s emergency support system.

Firefighters and aircraft have arrived from France, Ukraine, Cyprus, Croatia, Sweden and Israel, with more expected to arrive Saturday from Romania and Switzerland.

“Over the past few days, we have been facing a situation without precedent in our country, in the intensity and wide distribution of the wildfires, and the new outbreaks all over (Greece),” he said.

“I want to assure you that all forces available are taking part in the fight.”

The country has been baked by its most protracted heat wave in three decades, with temperatures soaring to 45C (113F).

Temperatures eased, but winds picked up, further exacerbating the situation.

Evacuation orders for villages and neighbourhoods have been constant, sent by push alerts to mobile phones in affected areas, while police and firefighters have gone door-to-door urging people to leave homes in the path of the flames.

On Friday, shifting winds and new flashpoints caused the blazes to the north of Athens and on Evia to repeatedly change direction, in some cases returning to threaten areas that had narrowly escaped destruction earlier in the week.

After burning through forests and houses towards Lake Marathon, the capital’s main water reservoir, a branch of the fire moved into the Mount Parnitha national park.

The park, one of the last remaining substantial forests near Athens, still bears deep scars from wildfires in 2007.

The 38-year-old volunteer firefighter who was killed died of head injuries after being struck by a falling electricity pole in an area north of the capital, officials said.

At least 20 people have required treatment nationwide, including two firefighters admitted to hospital in intensive care.

The causes of the fires are under investigation.

Police said the suspect detained north of Athens had allegedly lit fires at three separate spots in the area ravaged by the large blaze, which first broke out on Tuesday.

Greek and European officials also have blamed climate change for a large number of summer fires burning through southern Europe, from southern Italy to the Balkans, Greece and Turkey.

In Italy, firefighters battling a wildfire in Reggio Calabria province found the bodies of a man and a woman in an olive grove.

Massive fires also have been burning across Siberia in Russia’s north for weeks, while hot, bone-dry, gusty weather has also fuelled devastating wildfires in California.