“To be honest, in the middle of the sea I was not scared because everyone has to sacrifice something in their life.” 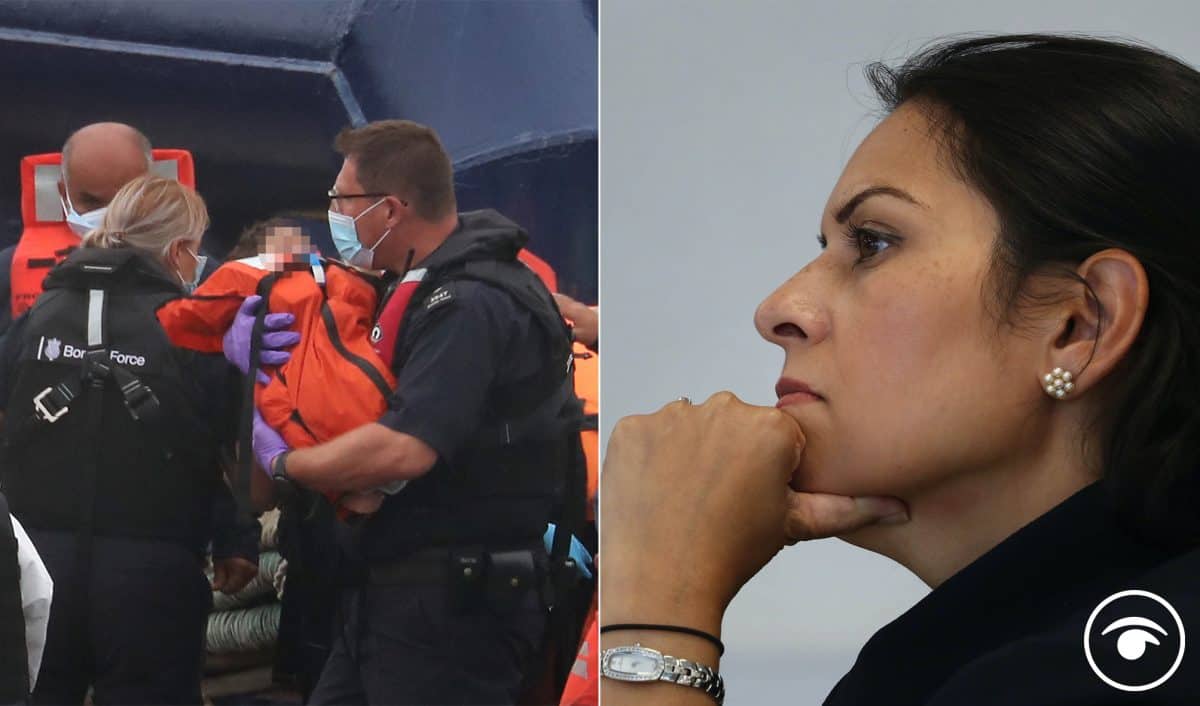 Men, women and children took on the dangerous journey in everything from dinghies and kayaks to a paddling pool.

While thousands of people successfully made it to Britain, the perilous Channel waters tragically claimed several lives.

The Home Office has been accused of “hostile rhetoric” and squandering taxpayer cash in its quest to make the route “unviable”.

Despite another agreement being signed with French authorities in November, it is unclear if crossings will be reduced in 2021.

Stephen Hale, CEO at Refugee Action, said: “The men, women and children clinging to dinghies in the Channel are desperate to find safety.

“After fleeing war and persecution they yet again put their lives on the line because there are so few safe and legal routes to seek refuge in the UK.

“No-one wants to see people making these dangerous crossings but the Government’s hostile rhetoric has done nothing to help.

“It must stop trying to look tough and urgently create safe and legal routes for people to seek sanctuary in the UK.”

People who have risked their lives by trying to cross from France to Britain have said how they faced violence, enslavement and were threatened at gunpoint.

Men, women and children have been charged thousands of pounds for spaces aboard tiny boats that are often unseaworthy and dangerous while others have stowed away in lorries.

Many have fled warzones and have experienced violence and torture as they travelled thousands of miles from their home countries in search of safety.

A selection of their stories is below, with names changed to protect their identities.

– Zartosht, a poet from Iran

Persecuted for his beliefs, talented Iranian poet Zartosht found his life at risk and was forced to flee his country.

He and his son endured terror and violence as they travelled through Europe, just wanting to survive.

Zartosht told PA about how he was forced aboard a dinghy boat with 14 others by a smuggler.

“They pulled a gun on me and said: ‘You either get in the boat or you lose your money and your life’.”

Every second of the 13-hour journey across the English Channel, Zartosht was terrified he and the others in the dinghy would fall out and drown.

He is now reunited with his son in the UK and is receiving psychotherapy from Freedom from Torture after being tortured in an Iranian prison.

The pair were housed in Birmingham while they wait for their asylum application to be processed.

He said he “absolutely adores” their new home because the UK is “such a green country”.

She left Ethiopia fearing political persecution and during her harrowing journey to Britain Mussarrat was enslaved and tortured.

After reaching Libya she was imprisoned in a large house with 30 other people and forced to work.

“They kept me like a slave. They enslaved me,” she told PA.

“Outside you hear the guns. People are shooting. This country, it’s very, very scary.”

When she was able to leave Libya she crossed the Mediterranean, one of around 250 people packed onto a small boat and put out to sea.

The journey to Italy took three days and only ended when a larger ship picked them up.

She eventually reached Britain after being smuggled into a lorry which then drove onto a boat and made the crossing to the UK.

“We were hiding in the lorry. There was not enough space, it was difficult to breathe.”

Mussarrat has been living in temporary accommodation with her daughter while awaiting the outcome of her asylum application.

Forced to leave his home after his mother and brother were killed and his own life was in danger, it took him years to reach Britain.

He told PA: “I am still scared, I don’t feel safe because maybe any time I could go back to Sudan.”

He is one of thousands of migrants who crossed the English Channel by boat in 2020.

Speaking through an interpreter, he described his time in the war-ravaged region of Darfur in Sudan.

Jackson said: “For me it’s so hard. They killed my mum and my older brother and my cousin. I don’t have any contact with my father for more than two years.”

His journey across the English Channel in a rowing boat took 10 hours with all four aboard constantly having to paddle.

“To be honest, in the middle of the sea I was not scared because everyone has to sacrifice something in their life.”

For more information about Freedom From Torture visit: https://www.freedomfromtorture.org/