A mast providing mobile connectivity to the Nightingale hospital in Birmingham was the latest to be attacked following a raft of bogus conspiracy theories. 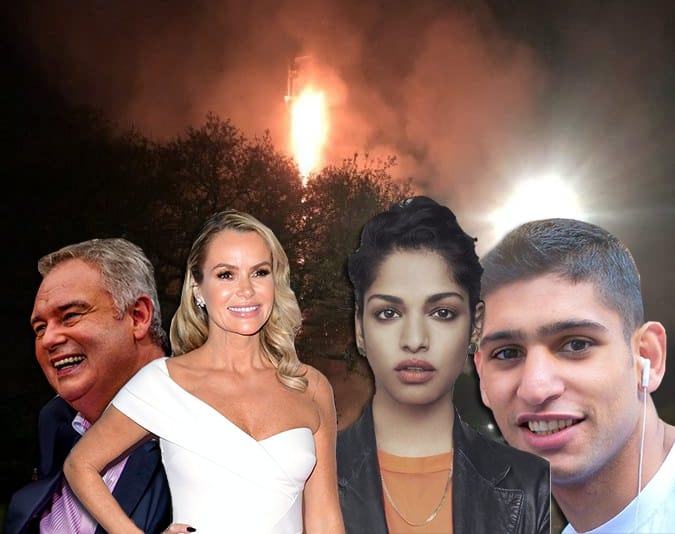 A mast providing mobile connectivity to the Nightingale hospital in Birmingham became the latest of some 20 suspected arson attacks against phone masts over the Easter weekend.

Conspiracy theories linking 5G masts to coronavirus are largely to blame for the spate of attacks that are bringing disruption to the country.

In some cases, the disruption could mean families are left unable to say a final goodbye to their loved ones or hard-working doctors, nurses or police officers not being able to phone their kids, partners or parents for a comforting chat.

At the heart of the spread of the conspiracy theory is a handful of politicians and celebrities who, according to a study conducted by Oxford University’s Reuters Institute, are responsible for producing a fifth of all misinformation about coronavirus.

So who are the leaders of the 5G coronavirus conspiracy game?

Amanda Holden, a judge on hit TV show Britain’s Got Talent, shared a petition on the government to stop 5G with her near 2 million followers on Twitter during the lockdown.

According to details shared on the campaign page, “symptoms of 5G exposure include respiratory problems, flu-like symptoms (temperature rises, fever, headaches), pneumonia” which are “very much like the effects of the coronavirus.”

Holden’s PRs quickly backtracked after the tweet was sent out, saying the TV star had accidentally tweeted a link to an anti-5G petition and does not believe in 5G conspiracies.

Champion boxer Amir Khan joined the list of celebrities promoting conspiracy theories about 5G by posting a series of videos to his Instagram account, where he’s followed by more than 1.3 million people.

“I think it’s a man-made thing guys it’s been put there for a reason, to keep everyone in while they test for 5G,” he wrote, adding that “it might be for population control.”

American rapper and actor Wiz Khalifa, whose song See You Again featured on the soundtrack to Furious 7 and peaked at number one on the Billboard Hot 100 for 12 non-consecutive weeks, hinted at a connection between coronavirus and 5G with a tweet that quickly garnered over 41,000 likes.

British rapper M.I.A became vocal about 5G conspiracies after tweeting to her 650,000 followers:

“If I have to choose the vaccine or chip I’m gonna choose death.”

The “chip” she refers to alludes to a fast-developing conspiracy theory – pushed heavily by anti-vaxxers and anti-5G campaigners – that the coronavirus is a ploy to mass-vaccinate the world’s population and implant them with a tracking chip, Coda reported.

Hollywood star John Cusack pushed the 5G conspiracy theory when he tweeted to his 1.6 million followers:

“5 — G wil [sic] be proven to be very very bad for people’s health,” he wrote. He later deleted the tweet, but not before calling his followers who disagreed with him “just DUMB and fucking sheep”.

“What I don’t accept is mainstream media immediately slapping that down as not true when they don’t know it’s not true,” Holmes claimed Monday on the popular ITV breakfast show This Morning.

“It’s very easy to say it’s not true because it suits the state narrative. That’s all I would say as someone of the inquiring mind.”

He later sought to clarify his comments, saying he had been “misrepresented”.

There’s no surprise that David Icke was an early celebrity proponent of 5G conspiracy theories, first mentioning the technology to his hundreds of thousands of Facebook followers in mid-2018.

Earlier this year YouTube moved to ban all conspiracy theory videos linking coronavirus symptoms to 5G networks after a live-streamed interview with Icke made the misleading connection.