In a long awaited statement on her final throw of the dice, Theresa May as expected announced one more vote to pass her Brexit deal – but in an attempt to lure MPs across the bench, and across the Brexit debate, she offered concessions including a vote on a confirmatory referendum to give the people […] 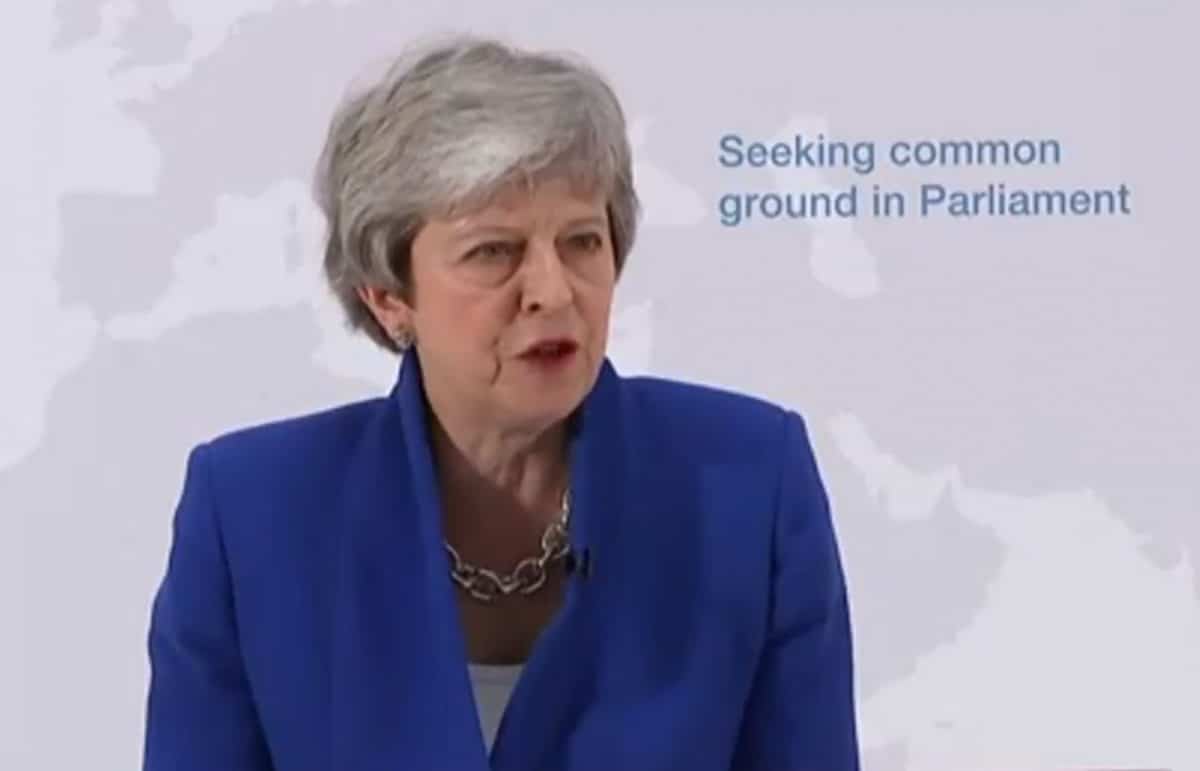 In a long awaited statement on her final throw of the dice, Theresa May as expected announced one more vote to pass her Brexit deal – but in an attempt to lure MPs across the bench, and across the Brexit debate, she offered concessions including a vote on a confirmatory referendum to give the people back a chance to have the final say on the Brexit deal.

In another speech straight to press, avoiding the questioning she would receive from MPs in the House of Commons, Theresa May said the Withdrawal Agreement Bill, which MPs will vote on next month, will include a requirement for MPs to vote on whether or not to hold another Brexit referendum.

But before the speech was even over, its hollowness was already unravelling.

“I believe there is now one last chance. Today I’m making a serious offer to MPs across parliament: a new Brexit deal,” said the Prime Minister.

The vote in early June will be Theresa May’s FOURTH attempt to pass her Brexit bill in the face of increasing pressure from Brexiteers in her own Tory ranks to quit.

The PM insisted this time the bill would be significantly different.

In a headline grabbing statement, she said MPs will be given an opportunity to vote for another referendum – but only if they pass the withdrawal agreement bill at second reading.

But there is nothing stopping MPs attaching an amendment to the withdrawal agreement bill stipulating the public has the final say anyway.

She also added a legal obligation to seek to conclude alternative arrangements to the Northern Ireland backstop by December 2020 to avoid any need for the backstop coming into force.

The government would also be obliged to seek frictionless trade in goods as possible, while leaving the single market and ending freedom of movement. – But surely this is what two years of negotiations with the EU by Theresa May, David Davis, Boris Johnson and co had failed to find a solution to?

Current environmental protections would remain after we leave the EU and  a new workers’ rights bill would make sure workers’ rights in the UK are as good or better than those of EU workers.

And MPs would have the power to approve treaties on the future relationship with the EU before the government signs them.

Before the speech was even over Tory MPs were rounding on the PM and insisting they would never vote for it.

People’s Vote supporting Labour MP Peter Kyle immediately tweeted the flaw in Theresa May’s offer for those who believe the public should have the final say on Brexit – if May immediately steps down, odds are her party will replace her with somebody who would rip up her promises.

“We will examine the legislation closely when the bill is finally published but the fundamental flaws of the draft Withdrawal Agreement treaty itself remain unchanged.

“Many of the proposals on the backstop serve as an attempt through domestic law to mitigate a bad deal whereas the focus should be on getting a better deal.”

Tory MP Simon Clarke said he had supported Theresa May’s Brexit deal before but was unable to now.

“I can’t see that we’ve taken back control over anything. The backstop is still there, it’s a customs union in all but name and it puts Brussels firmly in control of our destiny.

“There’s nothing new or bold about this bad buffet of non-Brexit options.

“At a time when people are deserting the main parties this is the PM’s response, to do all she can to defy the result of the referendum.

And the SNP’s Ian Blackford didn’t hold back making his opinion known either, accusing the PM of “treating Parliament with contempt” by announcing the vote in a business centre away from parliament and MPs’ scrutiny.