"I suppose he doesn’t want his parties gate-crashed. And aren’t there plenty of spare rooms at Chequers?" 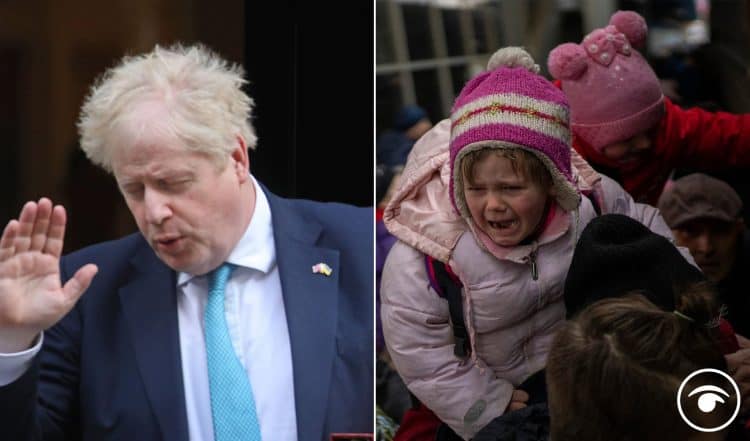 Boris Johnson is unlikely to take any Ukrainian refugees into No 10 under a new scheme to be set out on Monday due to security concerns.

The Prime Minister’s official spokesman indicated that Mr Johnson will not be taking part in the programme, but said it is up to individual ministers whether they offer a place to stay for those fleeing the war in eastern Europe.

Transport Secretary Grant Shapps said his family will apply for the new programme, through which people in the UK can offer to host Ukrainian refugees in their homes, while Communities Secretary Michael Gove said he was considering the prospect.

Health Secretary Sajid Javid said it would be difficult for him to “offer the time”.

Asked about Mr Johnson, who lives in the flat above No 11 Downing Street with his wife Carrie and two of his children, the PM’s spokesman said: “There are specific challenges around security on housing people in No 10.

“Various ministers have been asked about this. Obviously it will come down to individual circumstances. This is a significant commitment.”

However, a lot of people have pointed out that the PM does have a grace and favour mansion, the 16th-century manor house of Chequers in Buckinghamshire.

Details of the scheme, which will see households paid £350 a month for putting up refugees for a minimum of six months, will be set out by Mr Gove later.

The Health Secretary said if help cannot be provided this way, there are other ways to offer support.

Mr Javid was asked on BBC Breakfast whether he would consider hosting refugees in his home.

“I’m starting to have a conversation with my wife on that and I think many households – as you say, and I’m pleased you brought this up – are probably thinking about this across the country,” he said.

Mr Javid told LBC he has donated to the Disasters Emergency Committee appeal for Ukraine.

And he told ITV’s Good Morning Britain: “I do think, for me personally, it will be hard to offer the time that I think a host would reasonably (be) expected to have available to help the family that’s arriving, to help to integrate them into British society.”

Transport Secretary Grant Shapps said he will apply to join the scheme.

In a tweet, he said: “We’ve spent the past few weeks as a family discussing the devastating situation in Ukraine, and so we intend to apply today to join other UK households in offering our home to provide refuge to Ukrainians until it is safe for them to return to their country.”

On Sunday, Mr Gove was asked if he would take in a Ukrainian refugee.

He told the BBC’s Sunday Morning programme: “I’m exploring what I can do. I know that there are others who have. Without going into my personal circumstances, there are a couple of things I need to sort out – but yes.”

He said there are potentially “hundreds of thousands of people” in the UK willing to take Ukrainians into their homes.

Mr Javid said it is a “sensible approach” to allow Britons to offer refugees places to stay.

“This is an unprecedented situation,” he said. “There are, as we’ve seen across Europe, many millions of refugees and it’s right that Britain plays its role and that we have a scheme that allows British families to play their part and to offer sanctuary.”

Matt Hancock, Mr Javid’s predecessor as health secretary, said he will “be signing up and opening my home to support our Ukrainian friends”.

Asked if he would be willing to host a refugee, London mayor Sadiq Khan told Good Morning Britain: “Personally, we won’t be able to because of space and other security issues, but I admire the generosity of those Londoners, and we know our city is a very generous city.”

Related: Laurence Fox took on the Lineker boys and was kicked off the park