"The UK Government is like the greatest ‘The Thick of It’ episode of all time," wrote one twitter user. 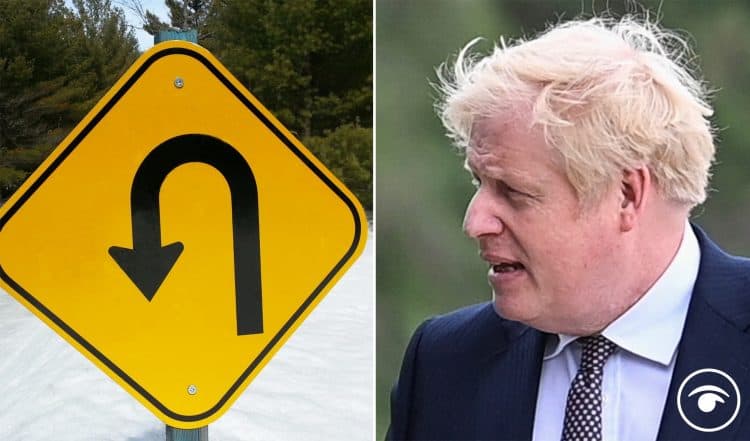 Boris Johnson has abandoned plans to avoid quarantine after being contacted by NHS Test and Trace following a furious political backlash.

The Prime Minister and Chancellor Rishi Sunak had originally planned to take daily tests rather than self-isolate following meetings last week with Health Secretary Sajid Javid who has tested positive for Covid-19.

But in a dramatic turnaround Downing Street said the two ministers would be self-isolating rather than taking part in a daily contact testing pilot.

“The Prime Minister has been contacted by NHS Test and Trace to say he is a contact of someone with Covid,” a spokesman said.

“He was at Chequers when contacted by Test and Trace and will remain there to isolate. He will not be taking part in the testing pilot.

“He will continue to conduct meetings with ministers remotely. The Chancellor has also been contacted and will also isolate as required and will not be taking part in the pilot.”

The U-turn came less that three hours after No 10 announced the two ministers would carry on working in Downing Street while taking daily tests.

That sparked outrage amid warnings it risked undermining the Government’s messaging on continuing to self-isolation at a critical point in the pandemic.

Labour leader Sir Keir Starmer said the Government was in “chaos” at a time when in needed to maintain public confidence.

“Boris Johnson and Rishi Sunak have been busted yet again for thinking the rules that we are all following don’t apply to them,” he said.

“The way the Prime Minister conducts himself creates chaos, makes for bad government and has deadly consequences for the British public.

“Yet again the Conservatives fixed the rules to benefit themselves and only backtracked when they were found out. They robbed the bank, got caught and have now offered to give the money back.”

I’m in a really bad place at the moment. Not mentally, I just live in the UK.

As I said last week to the Prime Minister, it can’t be one rule for him and his elite chums, and another for the rest of us plebs.

Despite his apology, not surprised with this constant disgraceful truth-twisting!https://t.co/JTuDN52AYt

How about the school teachers, transport workers and health workers getting a chance to be part of this test pilot or is it only for the privileged few? People have stuck to the rules and done the right thing, Boris Johnson is taking them for granted.

A government of fraudsters and grifters conning the public. https://t.co/XqKUksYXT2

This is an old story folks … @BorisJohnson and @RishiSunak being randomly selected by the pilot trial …. It happened to Mugabe too!! I met him a few times. Truly revolting. Johnson heading for the same league pic.twitter.com/CWOCnx4CX4

So far, members of this govt can:

1. Go to work instead of self-isolate

2. Ravish employees at work instead of socially distance

3. Test their eyes on 600 mile road trips instead of obey lockdown

4. Hand billion pound contacts out like smarties to mates

I dream of decency ?

Reactions to the u-turn

Here are some of the most cutting reactions

Wow. ⁦@BorisJohnson⁩ and ⁦@RishiSunak⁩ have now chosen to isolate and not participate in the exemption pilot. They plainly concluded if they didn’t isolate almost no one would pic.twitter.com/NCBBDd22yp

Is that a "U-turn" or a "climbdown"? Never sure

How has this government managed to cock up staying indoors. It’s literally the easiest thing in the world.

British politics. I mean. You’ve got to hand it to them it’s not dull

The mess of the UK government is largely explained by them holding the public in utter contempt.

They think the public are simplistic, incapable of independent thought or analysis – plebs, below them in life's hierarchy.

As long as they see a giant UK flag, they'll be happy.

As someone who has had to isolate for the week and cancelled 5 gigs to do so, let me say I am delighted they have abandoned this pilot scheme. In unrelated news I am abandoning my pilot scheme of posting dogshit to 10 & 11 Downing Street.

‘I won’t be swimming myself, I’m part of a pilot scheme to stay uneaten’ pic.twitter.com/3ao7Tb4w9K

The UK Government is like the greatest ‘The Thick of It’ episode of all time. pic.twitter.com/S31PzNXxA6

The questions you need to be asking at a job interview